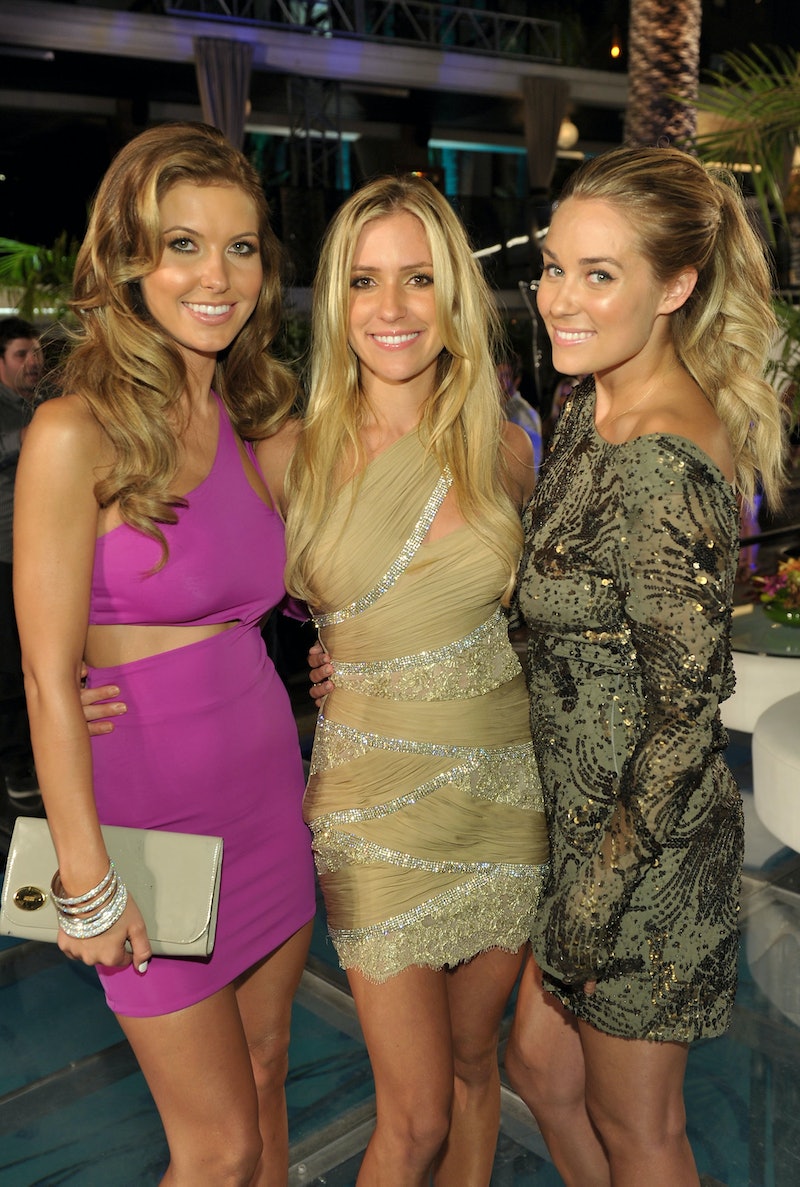 It’s 2006. Your straightening iron is hot and ready to sear your side bang into oblivion. An outfit is already laid out on your bed for your evening at Les Deux. You went classic: a shiny going-out top, True Religion low-rise jeans, and a peep-toe pump. You get a call on your flip phone; your girlies are on their way over. This is the kind of LA high life The Hills brought to life on screen. For six blissful seasons, audiences could not get enough.

We followed Lauren, Heidi, Spencer, Audrina, and Lo through heartbreaks, fights, and many nights out, yet all these years later there are still several unanswered questions from The Hills' original run. What was up with the forced love triangle between Heidi, Spencer, and Audrina in Season 2? How did those sextape rumors about Lauren Conrad and Jason Wahler really get started? And let’s not forget the mystery of Justin Bobby in general. Why did he have the vibe of a failed-and-now-long-retired indie musician? Why did he wear combat boots to the beach? Why did he never speak above a grave whisper? There's a lot to dissect.

Though over 15 years have passed since we first met LC and Heidi, the show has remained in the zeitgeist. In 2018, MTV’s reboot The Hills: New Beginnings welcomed back some, but not all, key original cast members. Now it appears another reboot is coming, but with a twist: The Hills: Next Gen will feature a brand-new cast that is expected to be more diverse than the original. According to Deadline, “the series will follow a close group of twentysomething friends and aspiring entrepreneurs who are coming of age in a very different L.A. They will navigate realities of race, class, identity, addiction, family drama along with the thrills of romance and becoming self-made amidst the exclusive enclave of the hills in Malibu.”

It will be interesting to see how The Hills adapts its ethos to 2022, but in the meantime, here are all the questions still haunting OG Hills fans today.

1. How Did They Get Into All Those Clubs Before They Were 21?

Nightlife was a huge part of The Hills' magic, but no one ever mentions that everyone in the cast was under 21 while going out to all of the hot clubs in Los Angeles. How did they get in? Sure, they were cast members on a hit reality TV show, but didn't that put MTV into some legally murky territory? How did they consistently get away with breaking the law?

2. What Happened To Jordan & Brian?

Jordan and Brian were a big part of the first season. We know Jordan and Heidi broke up (a long time coming, as all they did was fight) — but what happened to him and Brian after the fact? We never got any follow up and nothing was ever explained. Despite some rocky moments in the first season, we hope both boys are doing okay today.

3. What Happened To The Dog Jordan Got Heidi For Christmas?

Heidi was so excited to get a puppy for Christmas from then-boyfriend Jordan, but where was this dog after Season 1? Did Jordan keep it after they broke up? Best case: that puppy is now an old happy dog in the care of someone that loves it unconditionally. Worst case: that puppy was given away to some random shelter as soon as Heidi and Jordan called it quits.

4. Why Were They Always At Les Deux, Specifically?

You may not know it from its nondescript appearance, but Les Deux was The Spot in the early 2000s. Everyone who was anyone went to Les Deux: Tabloid queens like Paris Hilton, Lindsay Lohan, Britney Spears and Nicole Richie were often seen stumbling out in the wee hours of the morning. Kim Kardashian even celebrated her 27th birthday at the club, with just about every member of the Kardashian Krew in attendance. How did a place with that kind of clientele let in a bunch of underage kids?

5. What Was Going On With Spencer & Audrina During Season 2?

Heidi was livid that Spencer was hanging out with Audrina when she first started dating him in Season 2. Spencer gave Audrina flowers and even took her to his beloved Mexican restaurant, Don Antonios, which later became he and Heidi's spot. Did Spencer actually date Audrina? Did they ever hook up? Was it just (another) manufactured storyline?

6. Were There Other Interns At Teen Vogue?

Were the other interns just camera shy, or was Lisa Love solely relying on Lauren and Whitney to get all the grunt work done? There’s also the fact that you usually just intern somewhere for a summer, not for several years, that is confusing.

7. Why Did Whitney Still Work In A Closet With Lauren After She Was Promoted?

After Whitney got a "promotion," she inexplicably remained in that closet with Lauren. Was there not a cubicle for her to sit in? What was different about Whitney’s full-time job in comparison to her internship? It just didn't quite add up. Port addressed the confusion in 2016. “I wasn't ever really hired by Teen Vogue,” she told Entertainment Tonight. “It was all the same to me.” Shocking!

Jason gave Lauren a black Chanel bag for Christmas during Season 1. After they broke up, Heidi carried around an identical bag. Did she just get the same one? Or did Lauren pass it down post-breakup? It is sweet to think that while Lauren and Heidi were still best friends, they were swapping designer goods back and forth.

9. Since When Are They Sending Interns to Paris?

This iconic storyline, in which Lauren gets dubbed “the girl that didn’t go to Paris” for choosing a boy over a job opportunity, just does not add up. Staff members at legacy publications have to fight to be sent abroad for fashion week, so it feels extremely unlikely Teen Vogue is spending thousands to send an intern over for an entire summer.

10. Why Did Justin Want To Change His Name To Bobby?

It’s unclear why Justin wanted to change his name to Bobby, but Hills fans are happy that didn't actually happen; his double name is an iconic piece of the show's history. It’s hard to pin down the reasoning behind any of Justin Bobby’s actions, but he and Audrina’s on-again, off-again relationship was always a joy to watch play out. How could we ever forget that scandalous scene in the hot tub?

11. Did Spencer Lose His Security Deposit Over That “Hollywood” Graffiti Mural?

Heidi was not pleased when she walked in and saw Spencer’s great work of art — he commissioned a very strange graffiti piece that simply reads “Hollywood” to live permanently over their beige couch — and really, who can blame her? We have to wonder how many coats of paint it took Heidi to cover it up.

12. Why Did No One Mention Lauren After She Left The Show?

Everything centered around Lauren for five and a half seasons. Then abruptly, her reign ended. No one filmed with her after Speidi's wedding, but why wasn't she ever mentioned? Did those moments just get cut out, or did she cut ties with everyone in the cast, too? What happened to the apartment she shared with Lo and Audrina?

13. How Did Heidi Get That Promotion Over Elodie?

Famously, Heidi was not a fan of doing work. Going to school was very much not her thing, and she went into PR hoping to make her party girl life into a career. So it does make you wonder how, at 20, she got a big promotion at Bolthouse over Elodie, who appeared to be a seasoned professional.

14. Did Stephanie Learn The Difference Between A Hamster & A Guinea Pig?

Stephanie told Lauren that she liked cuddling with her hamster when she was stressed out. Lauren was confused, since Stephanie previously said she had a guinea pig. Stephanie incorrectly clarified, "She was a hamster. Now she's a guinea pig." No, Stephanie. It, tragically, doesn't work like that. Hopefully, she learned the difference.

Stacie Hall, aka Stacie the bartender, was initially featured as a "friend" of Spencer's that Heidi didn't want him hanging out with. Then, she showed up again as Kristin's BFF. Did they just happen to know each other from years of hanging out at Hollywood it-girl spots? Seems like some sneaky producer interference.

16. Where Were Enzo's Parents?

What was Enzo doing at Spencer and Heidi’s house all the time? Why did Heidi throw him a birthday party? Where were his parents? The birthday party was particularly extravagant (it included an actual live elephant that Heidi and Enzo rode together) and really leaves us with more questions than answers as to why this relationship seems to be so deep.

One look at Lauren and Heidi’s apartment, and it’s clear that this is not the kind of run-down makeshift one-bedroom most jobless 19-year-olds can afford. On top of their swanky homes, everyone on the show wore designer and was out on the town eating at pricey restaurants constantly. Chanel bags, Gucci sunglasses, and $300 jeans were a mainstay among the whole cast who, again, barely had internships that they worked part-time. The answer to how they could afford all this is most likely very simple (rich parents and a reality TV contract with MTV) but still, one really has to suspend disbelief for any of their lifestyles to make sense.

This is the question that will perplex Hills fans forever. What was exaggerated? What was contrived? Was any of it actually real? Will we ever know? How true to life will The Hills: Next Gen be?

We might never know the answers to these questions, but we can still revel in the show’s luster. As the great Lo Bosworth once said, "Eat your Pinkberry and enjoy life!"

More like this
Nicola Coughlan Shared A Lady Whistledown Excerpt From ‘Bridgerton’ Season 3
By Grace Wehniainen, Alyssa Lapid and Sam Ramsden
'Survivor' Is Finally Coming Back To UK Screens
By El Hunt
Kyle & Deepti Finally Revealed Their Relationship Status Post-'After The Altar'
By Grace Wehniainen
Here’s What 'Sister Wives’ Star Christine Brown Has Been Up To Since Leaving Kody
By Grace Wehniainen
Get Even More From Bustle — Sign Up For The Newsletter