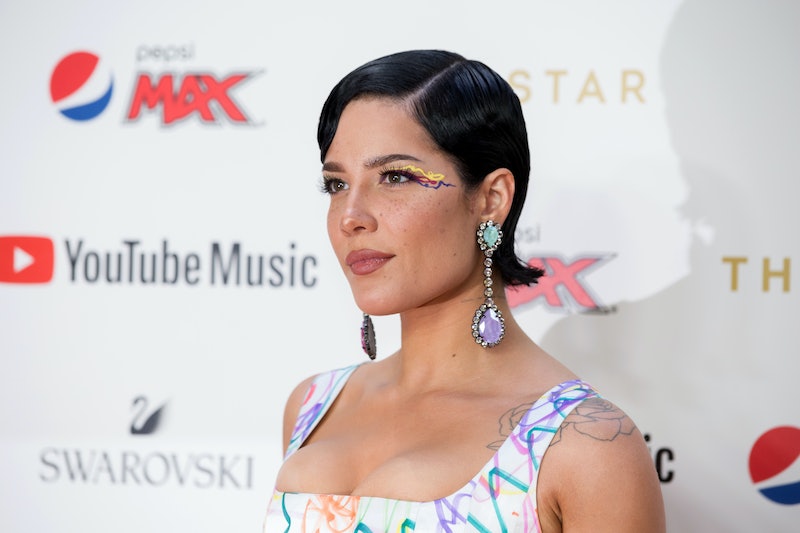 Halsey stans, try to remain calm. The "Without Me" powerhouse just made a surprise announcement and revealed that she's pregnant. On Wednesday, Jan. 27, Halsey dropped some pics from a stunning maternity photoshoot and wrote, "Surprise!" along with a baby, bottle, and rainbow emoji. Shortly after posting the announcement to her Instagram, Us Weekly confirmed that Alev Aydin — who was tagged in the photoset — is the father of her unborn child.

The singer's pregnancy announcement is especially significant considering she's openly suffered miscarriages in the past. Wearing a rainbow top in the photos she posted, Halsey tweeted "my rainbow" shortly after, seemingly referring to a term often used to describe a healthy child born after another was lost. On "More," a track off of her latest album Manic, she sings, “When you decide it’s your time to arrive, I’ve loved you for all of my life."

While Halsey has certainly had her share of public relationships over the years, she often keeps the romantic parts of her life private, mostly choosing to share details through curated social media posts or song lyrics. So while no details of her current relationship have been revealed yet, take a trip down memory lane and check out the singer's full list of partners, from a fling with Ruby Rose to conceiving a child with Aydin.

Orange Is The New Black star and former Australia's Next Top Model contestant Ruby Rose and Halsey were spotted together shortly after Ruby Rose's split with Phoebe Dahl (Roald Dahl's granddaughter). The magazines went wild, and who could blame them? Rose is stunning, genderfluid (though she prefers female pronouns), and proudly gay. She seemed every bit as ballsy and completely herself as Halsey. But their relationship didn't last longer than the few times they went s in December 2015.

Most of the tracks on Halsey's debut EP, Room 93, are rumored to be about The 1975's frontman, Matt Healy. Regarding their 2015 relationship, Halsey previously told Billboard, "I spent a lot of time watching him and he spent a lot of time loving being watched. But if you think he's the first red-wine-­drinking, pretty-boy rocker in skinny jeans I've been associated with, you're out of your f*cking mind."

Halsey and her Norwegian producer Lido were an on-again, off-again couple longer than Lorelai Gilmore and Luke Danes. In a 2017 interview, Halsey opened up about their dynamic and how it may have seemed confusing to some from the outside looking in. She told Dazed, "There were times when (Lido and I) really fucking hated each other, and we’d still be working on music. Everyone we knew was laughing at us, like, ‘What the fuck is wrong with you?’" She continued, "And there were definitely some nights where we’d be in the studio and we’d go in hating each other and leave rekindled with some sort of closure. But I think for both of us, it was therapeutic."

Years before he began dating Megan Fox, punk-rocker Machine Gun Kelly and Halsey got cozy after meeting on the set of Showtime's Roadies. The two shared many photos together on social media and even vacationed together in Mexico, but she later called him "pathetic" amid a feud with rapper G-Eazy that revolved around both artists' relationships with the Manic performer. It's safe to say they're long over now.

Back in 2017, Halsey and G-Eazy had quite the public on-and-off relationship. The pair even released a duet, "Him & I," which they performed several times together on TV before it went on to become certified double platinum by the RIAA. In July 2018, Halsey wrote on social media: "I normally keep this kind of thing private but provided our public nature I feel the need to inform my fans. G-Eazy and I are taking some apart."

She continued, "I'm eager to continue the upcoming passage of time dedicating myself to my art and my career, and the duration of my tour. I wish him the best. Thanks for respecting our privacy at this time." After rekindling for short period of time, the two officially called it quits a few months later in October 2018.

Shortly after ending her relationship with G-Eazy, Halsey began dating alternative musician Yungblud in November 2018 after reportedly sliding into his DMs and dropping her phone number. The two artists dated for just two months shy of a year, during which they released a collaboration titled "11 Minutes" with Blink-182's Travis Barker, and mutually called it quits in September 2019.

Speaking to singer Jessie Ware on her Table Manners podcast, Yungblud explained that he and Halsey simply work better as friends. No drama here, folks!

After publicly thirsting for him on Twitter back in 2012, Halsey began dating American Horror Story actor Evan Peters in October 2019. The pair were publicly spotted on a date at L.A.'s Six Flags Magic Mountain theme park and walked the red carpet for AHS' 100th episode event, but their relationship was short-lived.

While Halsey hasn't revealed the details of their breakup, she removed many photos of him from her social media at the start of 2020. Maybe we shouldn't meet our teenage crushes after all...

While Halsey has yet to confirm the details of their relationship, after tagging him in her pregnancy announcement Us Weekly confirmed that the father of her child is Alev Aydin. According to his IMDb page, Aydin is a screenwriter, producer, and actor who made his last onscreen appearance in the 2017 film Cruel Hearts.

Check out fan reactions to Halsey's pregnancy announcement below:

This article was originally published on April 8, 2016