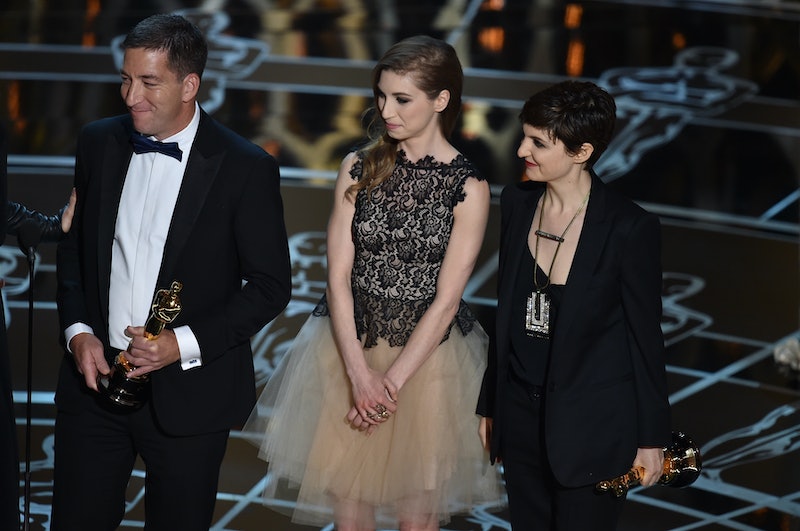 Everybody knows about Edward Snowden. The former government contractor took part in perhaps the biggest government scandal of this century when he leaked classified documents about the NSA's monitoring activity to the press in 2013. Since that time, Snowden has left the United States, where he is wanted for stealing government property and for violating the Espionage Act. According to CNN, as of October 2020, Snowden has been granted permanent residency in Russia. He’s lived in asylum within the country since 2013.

The whistleblower was dating someone at the time of his NSA leak, and for those wondering where Snowden's then-girlfriend, Lindsay Mills, is now, it's clear the two are married and the parents of a baby boy. Due to recent updates shared by both Snowden and Mills, the couple's typical low-profile has become a bit more prominent.

Mills, a dancer and acrobat, has been with Snowden since 2009 — four years before his famous leak. They had been living together in Hawaii prior to Snowden fleeing for Hong Kong, then Russia, which he did while telling her that he was only going on vacation. After learning the truth about his whereabouts, she remained in the U.S. for a time (since she did not commit any crime, she ran no risk to herself by staying in America).

She was later revealed to be living with Snowden in Russia via the 2014 documentary Citizenfour, having moved there in July of that year. Snowden and Mills married in 2017, exclusively telling The Guardian two years later that they “secretly” wed “in a Russian courthouse.” And in Nov. 2020, Snowden tweeted that he and Mills were “applying for dual US-Russian citizenship.” He wrote, “Lindsay and I will remain Americans, raising our son with all the values of the America we love – including the freedom to speak his mind. And I look forward to the day I can return to the States, so the whole family can be reunited."

Perhaps the best way to categorize Mills' living situation is to say she's nomadic. She has a blog, a Twitter account, and an Instagram, posting pictures on all of them. She almost never says where the photos were taken, but some appear to be from the U.S., while others seem to be in Moscow. Mills has also shared photos from her travels in Iceland, Poland, and other spots throughout Eastern Europe. It's unknown whether or not Snowden accompanied her, but given that he risks extradition to the U.S. in many countries years after his leak, it seems pretty unlikely that he tagged along.

Since the Dec. 2020 birth of her and Snowden’s child, Mills has posted several photos on social media to commemorate the happy occasion. She even shared a semi-nude picture on social media of her cradling the baby in her arms. (They have not yet revealed the child’s identity to the media.)

Without question, Mills' most notable public appearance occurred last year, when she attended the 2015 Academy Awards. She was there on behalf of Citizenfour, and even made her way onstage alongside filmmaker Laura Poitras and journalist Glenn Greenwald when the film won the award for Best Documentary Feature.

So while Mills has been able to spend time alongside Snowden in Russia, she does not lead the restricted life that he does. She is free to travel and have experiences like going to the Oscars, which Snowden simply can't due to his legal situation. Still, Moscow seems to be the place that she most likely calls home.

More like this
Who Is 'Umbrella Academy' Star Elliot Page Dating After His Divorce?
By Jake Viswanath
Tanya Burr Is Expecting A Baby With Her Mystery Partner
By Maxine Harrison
Khloé Kardashian Set The Record Straight On A New Dating Rumor
By Grace Wehniainen
‘The Bachelorette’s Michelle Young & Nayte Olukoya Explained Their Breakup
By Stephanie Topacio Long
Get Even More From Bustle — Sign Up For The Newsletter

This article was originally published on Sep. 13, 2016