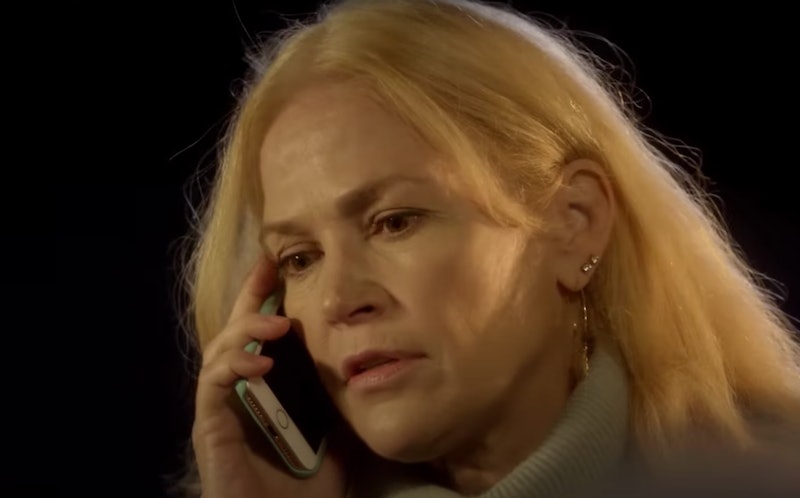 Is it possible to revive a decade-old cold case? That’s the central question in Lifetime’s Long Island Serial Killer: A Mother's Hunt for Justice, a film inspired by the true story of the eponymous killer. For years, the murders of an estimated 10 to 16 victims — mostly sex workers and found near Gilgo and Oak Beach on the South Shore of Long Island — has remained unsolved. The Long Island Serial Killer has never been caught, but new evidence unearthed in 2020 has revived interest in the case.

The Long Island Serial Killer follows the true story of Mari Gilbert, whose daughter Shannan disappeared in May 2010. (Per Vice, Gilbert, a sex worker, went missing from Oak Beach shortly after making a frantic 911 call in which she reportedly said, “They're trying to kill me.”) In the film, mother Mari (Kim Delaney) pushes police to look into the disappearance of Shannan (Katharine Isabelle) after she doesn't return home from a date. This eventually leads to the discovery of several young women buried in shallow graves at Gilgo Beach. Tragically, the real Mari was killed in 2016, but the film follows her dedication to keeping the case alive, in the hopes of one day finding the killer.

The hunt for the Long Island Serial Killer began in earnest in December 2010, seven months after Gilbert begged authorities to look into Shannan’s disappearance. Four bodies wrapped in burlap were discovered on a desolate stretch of Ocean Parkway near Gilgo Beach; all the victims were women who had been sex workers on Craigslist. Authorities realized the area was doubling as a mass grave, and in the following months the remains of as many as 16 people were found.

In November 2011, the New York Daily News reported that Suffolk County police were working under the suspicion that the same killer was responsible. Authorities at the time, however, did not believe that the Long Island Serial Killer murdered Gilbert. “She went missing in Oak Beach, and this has nothing to do with the serial killer," Police Commissioner Richard Dormer told WABC at the time.

In December 2011, police found Gilbert’s body in a marsh in Oak Beach that they hadn’t previously searched. After that discovery, though, the case seemed to go cold, and police were reluctant to discuss it publicly. They withdrew from working with the F.B.I. in 2012, according to The New York Times, and never announced a suspect or person of interest. There was no further movement on the case until April 2018, when former F.B.I. agent Geraldine Hart became commissioner of the Suffolk County Police Department.

On Jan. 16, 2020, Hart shared a piece of previously undisclosed evidence, a leather belt with the hand-engraved initials “HM” or “WH.” Hart believed it could have belonged to the serial killer. “We are hopeful this photo will bring someone forward with information about its origin,” Hart told reporters, per Long Island Press.

On May 28, 2020, Hart then announced that they had discovered the identity of the victim formerly known only as “Jane Doe No. 6,” whose remains were found in Manorville and near Gilgo Beach. Her name was Valerie Mack, a Philadelphia woman who had been missing for 20 years. Nothing connected her to Long Island, yet like the other victims, she had been a petite woman in her 20s who worked as a sex worker.

The search for the Long Island Serial Killer is ongoing. In December, Hart told 48 Hours that they are still looking into Shannan Gilbert’s death as a possible homicide.

“There’s a lot of work left to do,” Hart told The New York Times. “But there is momentum. And I’m going to continue to use that momentum to move forward.”

This article was originally published on November 12, 2016