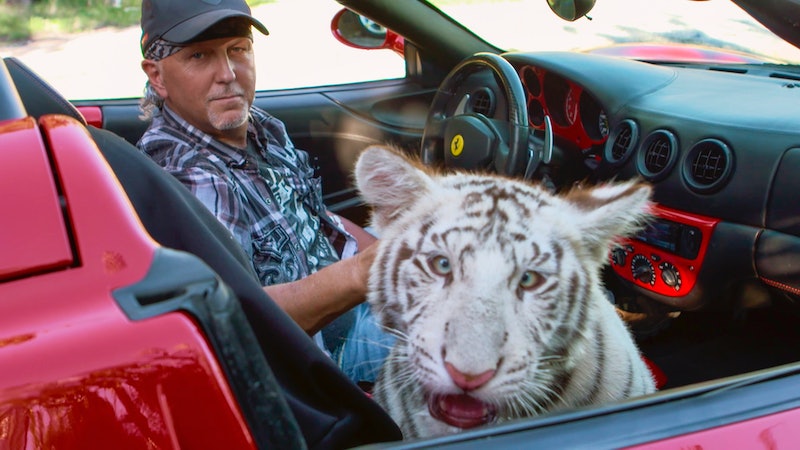 Following the closure of the zoo last month, PETA has confiscated three lions from Tiger King’s Greater Wynnewood Exotic Animal Park in Oklahoma. The nonprofit animal rights organization announced the coup on its blog on Monday, Sept. 21 — and also revealed an intent to sue the park and Jeff Lowe, who acquired the zoo following former operator Joseph Allen Maldonado-Passage's (known as Joe Exotic) arrest for his murder-for-hire plot against Carole Baskin, as well as counts of animal abuse. (If you're confused, you might want to go catch up on Netflix's docuseries Tiger King: Murder, Mayhem and Madness.)

All three lions will be transferred to the Wild Animal Sanctuary in Colorado, per the organization. PETA also said that one lion, Nala, could “barely walk” and had been “so ill” that the U.S. Department of Agriculture (USDA) had to halt its inspection in June and order Lowe to provide her with veterinary care. The organization also revealed that there had been a fourth lion, but she died under “suspicious circumstances” back in April. PETA is now investigating her death.

“We aim to prove that Lowe and his associates have violated the [Endangered Species Act] in numerous ways, including by prematurely separating big cat cubs from their mothers and forcing them to interact with members of the public, as well as denying ring-tailed lemurs, big cats, and a grizzly bear proper nutrition and species appropriate enrichment,” the group said. “With this lawsuit, we aim to stop Lowe from continuing to harm or harass protected animals… at G.W. Park in Wynnewood, Oklahoma.”

A spokesperson for PETA also told TheWrap on Tuesday that the USDA suspended Lowe’s federal Animal Welfare Act license, and has begun the proper proceedings to revoke it permanently. The court-ordered confiscation comes after PETA’s successful lawsuit against Lowe’s former business partner Tim Stark, who transferred the lions over to Lowe’s park.

Oklahoma’s Greater Wynnewood Exotic Animal Park is currently closed to the public, and Lowe is no longer running it. Instead, the Zoo now reportedly belongs to Baskin's Big Cat Rescue, as it was awarded to her in a judgment on a trademark infringement case she had brought against Exotic years ago.