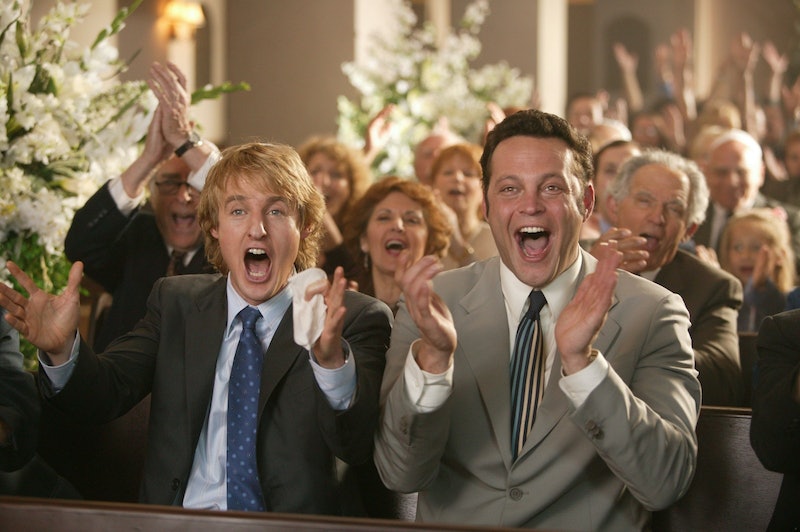 It may be time to cue up “Shout!” and hit the dance floor once more. According to industry paper tProduction Weekly, a Wedding Crashers sequel is currently in the works at HBO Max. If the report is true, members of the original cast — including Owen Wilson, Vince Vaughn, Isla Fisher, and Rachel McAdams — will reprise their roles from the hit 2005 comedy. Wedding Crashers 2 will reportedly start filming in August in Puerto Rico, but it remains unclear if Will Ferrell, Bradley Cooper, Christopher Walken or Jane Seymour will return.

This isn’t the first time that there’s been talk about a possible Wedding Crashers sequel. During an interview with Entertainment Tonight in November 2020, Vince Vaughn confirmed that a Wedding Crashers sequel was being seriously discussed 15 years after the original movie hit theaters. The actor revealed that he and frequent collaborator Wilson were looking to reprise their roles as divorce mediators who spend their free time crashing weddings in order to meet single women.

“Owen and I and the director of Crashers [David Dobkin] have been talking for the first time seriously [about] a sequel to that movie,” Vaughn told the outlet, explaining that the trio has settled on “an idea that is pretty good” for a potential sequel plotline. “So we are talking about that in the early stages."“

While Vaughn didn’t share many details about the planned sequel including who else would potentially reprise their roles, he did explain that he has always had a soft spot for the beloved film. “They were fun movies to make,” Vaughn said about Wedding Crashers and some of his other projects. “It’s always fun to make people laugh and go to work with people that are funny.”

In July, Dobkin told Entertainment Weekly that he, Vaughn, and Wilson have been talking about making a Wedding Crashers sequel for “many, many years,” but they wanted to wait until they had the perfect story in mind. “Vince, Owen, and I sat down at one point early on, when they were pressuring us to come up with something, and we had a lot of fun, but we realized we were remaking the same movie again and we really didn't want to do that,” he explained.

After doing some brainstorming, however, the trio seems ready to revisit Vaughn and Wilson's characters. “Ten or more years later, all of a sudden these guys are in their mid to late 40s and they end up single — what do they do?” Dobkin said. “It’s a head trip for men, the idea of maybe I’m not going to be a dad, maybe I’m not going to be married. So it became a real cultural question and it yielded an interesting kind of center to the movie.”

But even though they have a general idea in mind, Dobkin added that none of them are in a rush to make a Wedding Crashers sequel until the time is just right. “I believe in sequels that are new and appropriate, and I don’t think there’s a time limit of chasing what that is. There may be one day when we can finally get it all together,” the director explained.

Regardless of when the Wedding Crashers follow-up will hit theaters, Dobkin said that fans will be delighted by what he, Wilson, and Vaughn have come up with. “I can tell you that it’s really fun to read those voices of these guys on the page again,” he explained. “There was a joy that I was surprised at when I read the first draft of what could have been, or maybe one day will be, this sequel. I do think audiences would love it.”