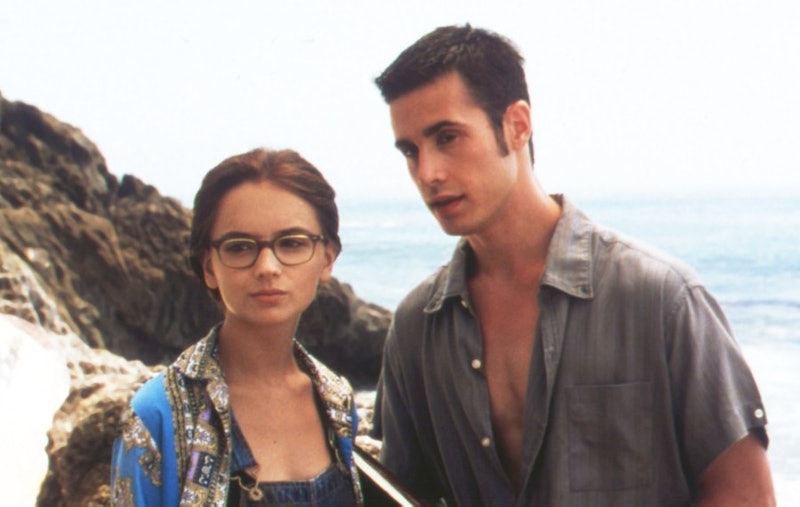 I have always been unapologetic in my love for romantic comedies — good ones, bad ones, those made for TV ones on the Hallmark Channel — I love them all. When I was a young teenager, my love extended to She's All That , a movie I watched on an endless loop. In case you're not familiar with the movie (were you living under a rock in the early aughts?) She's All That is a (very) loose adaptation of My Fair Lady. It takes the general premise: A guy gives a woman a complete makeover to make her acceptable to society, falls for her in the process, and applies it to the unforgiving world of high school.

Freddie Prinze, Jr. and Rachel Leigh Cook have sweet chemistry as jock Zack and artist Laney, and the movie includes one of the best movie dance scenes ever — but even the prom dance-off cannot make me watch She's All That again. I am older, wiser, and can no longer abide by the movie's plot. Despite its nostalgia factor and plethora of '90s stars, I won't be watching She's All That again, and here are 13 reasons why this is the one romcom I had to break up with.

1. Zack Thinks All Girls Are Interchangeable...

Zack is so annoyed about being dumped that he declares his popular girlfriend could be replaced by any girl at school. Not only does he suggest all girls are interchangeable, he is also certain that without his popularity, his ex-girlfriend Taylor can be instantly overshadowed by whoever is on his arm. Zack's shallowness and narcissism is alarming even for a teenage boy who is hero-worshiped by the entire school. I'm pretty sure this is how dictators happen.

2. ...Unless They Don't Fit Their Ideals Of Beauty

Before settling on Laney as project, Zack completely balks at the idea of having to turn a "fat girl" into prom queen. Never mind the part where the girl is beautiful, clearly has friends, and is just eating her lunch when Zack and his buddies decide to single her out. She doesn't fit their ideals of beauty, so even Zack's bros wouldn't give him such an insurmountable task as to make her popular. Insert a thousand eye rolls here.

3. There Is No World Where Rachel Leigh Cook Isn't Beautiful

Zack backtracks on his earlier girl dismissals when presented with Laney because she's "scary and inaccessible" and wears glasses? The movie presents Laney as a troll person who can't walk up or down stairs without falling. She is meant to be homely, but she's Rachel Leigh Cook, and Zack acts like he has just been tasked with dating the witch from Snow White.

I know this scene is supposed to be about Zack digging deep and exposing his insecurities, but I am just not impressed by his impromptu hacky sack performance. I was never convinced Laney would be either.

Because all women are clumsy in romantic comedies. How will us "normal" gals relate to them otherwise?

After enlisting his sister to give Laney a makeover, Zack and Laney's brother stand at the bottom of the stairs and gawk at how unexpectedly stunning she is. But why though? Laney doesn't need contacts and a red dress to make her beautiful. She was already beautiful. If she wants those things, then awesome — but the idea that a girl should change her outward appearance at the behest of a guy is problematic on every level.

7. No One Appreciates Taylor's Epicness

Taylor is a badass. With or without a boyfriend, she is determined to win prom queen. Her self-esteem is off the charts. She is the quintessential mean girl, but I would still want to be her friend.

8. The Prom Dance Scene Is Unbelievable

The massively choreographed dance scene is cool, but in what world would the entire school get together to practice for this? It's like, for four minutes, the movie turns into West Side Story for no discernible reason.

9. Attempted Assault Is Played As A Joke

Zack's friend Dean takes Laney to a hotel room off-screen after the prom and attempts to assault her. She gets away by blasting an air horn in his ear, and it's played as a throwaway gag. On what planet is attempted sexual assault funny? Dean doesn't face any penalty for his actions either — he just can't hear his name called at graduation.

10. Laney Takes Zack Back After She Finds Out About The Bet

I could have gotten on board with Laney forgiving Zack, but forgiving him and taking him back was a road too far for me. I never felt like Zack really learned anything. Is he going to stop judging people based purely on their looks? Because he had to completely change everything about Laney's outward appearance to realize what a wonderful person she was.

11. The Bet Has The Lowest Stakes Ever

Zack uses another human being as his plaything to avoid public nudity. The stakes are so low, he could have come clean the moment he started having feelings for Laney and avoided breaking her heart. Zack is the worst.

When you get Usher in a movie, Usher should be in every scene. That's just common sense.

If you weren't alive in 1999, just trust me on this one. She's All That made Sixpence None the Richer's song "Kiss Me" so ubiquitous, no one ever wanted to hear it again.

There was a time when I thoroughly enjoyed She's All That, but I just can't deal with a movie that makes me feel bad about my bespectacled self, and utilizes so many horrible movie tropes. Sorry, Zack — at least Laney loves you, I guess.

More like this
The Banned 'Friends' Ad Shows Monica As You’ve Never Seen Her Before
By Sam Ramsden
Twitter Is Having A Field Day Over Mr Blobby’s Costume Selling For £62k
By Catharina Cheung
'Friends' Star Maggie Wheeler Offers Support To Matthew Perry After Reading His Memoir
By Alyssa Lapid
Everything To Know About 'And Just Like That...' Season 2
By Jack Irvin and Grace Wehniainen
Get Even More From Bustle — Sign Up For The Newsletter
From hair trends to relationship advice, our daily newsletter has everything you need to sound like a person who’s on TikTok, even if you aren’t.