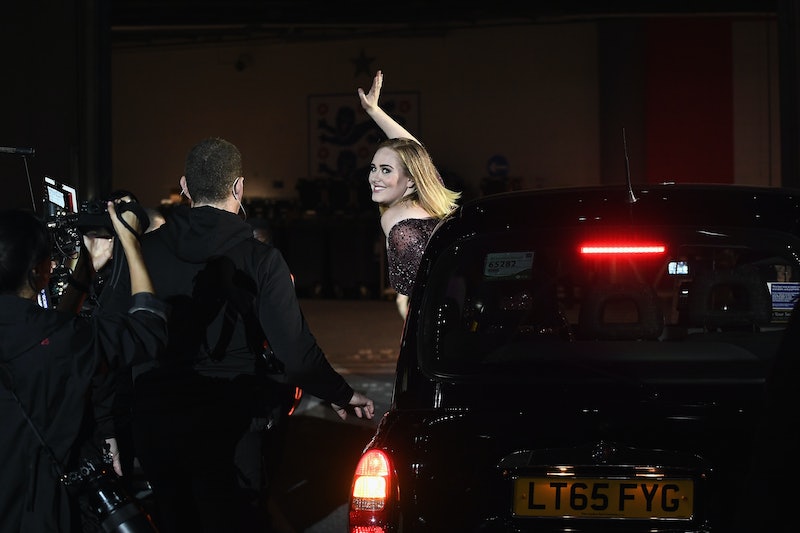 Adele is back with a new single after not releasing music in six years, and that can only mean one thing: People worldwide are collectively crying again. The singer-songwriter dropped “Easy On Me” on Oct. 15, and the sad ballad from her forthcoming album 30 was immediately welcomed warmly by critics and emotionally by fans on Twitter. The masses craved sadness lyrically and sonically, and Adele did not disappoint.

In the 15-time Grammy winner’s latest single, she sings about her marriage, compromise, and eventual divorce: “There ain’t no room for things to change / When we are both so deeply stuck in our ways / You can’t deny how hard I’ve tried / I changed who I was to put you both first / But now I give up.” Since her 2019 divorce to Simon Konecki, Adele has started dating sports agent Rich Paul, who she introduced to everyone via an Instagram photo in September 2021.

If you’re enjoying the catharsis brought on by her once-in-a-generation vocals and songwriting ability — or just needing something more devastating than “Easy On Me” — you should dive into her back catalog, which is chock full of beautiful songs that will break your heart.

Here are Adele’s five most devastating songs, in no particular order.

Most people outside of the U.K. didn’t hear about Adele until 2008 when “Chasing Pavements” was released as a single from her debut album 19, but that was not her first song. The then-rising talent began what would go on to be a historic career with “Hometown Glory,” which long predated her being signed to a record label. The singer-songwriter claims she penned the track in 10 minutes when she was still a teenager, but it was officially released as a single years later.

It’s difficult to believe someone so young could cram so much melancholy into one tune, but thus is the inimitable power and talent of Adele. “Hometown Glory” is an ode to the part of London where she was born and raised, but it is somehow also heartbreaking. Sure, it’s gloomy, but it’s also strikingly beautiful, which is par for the course for early Adele.

Before “Easy on Me,” Adele managed to reach the entire world with nothing but a piano and her voice on “Someone Like You.” The track isn’t just one of her most heartbreaking, it’s perhaps the single most devastating track released in the past decade.

The second single taken from her sophomore album 21, no other song delivers the raw emotion and ruination felt throughout the full-length as powerfully or as efficiently as “Someone Like You.” The song resonated with millions, as anyone who has had to move on from a love who no longer wanted them can relate to the simple but timeless lyrics.

Most musicians wouldn’t be able to follow up a single like “Rolling in the Deep,” but “Someone Like You” bolted to No. 1 in her home country of the U.K. after she performed it at the 2011 Brit Awards in what is still thought of as one of the better moments in the history of the ceremony. It remains one of the bestselling songs of all time in the U.K., and when it reached the top of the charts in the U.S., it became the first piano-only-infused vocal song to ever do so.

Again, the vast majority of artists would experience a slump, either creatively or critically, following a generation-defining success like 21 and the singles featured on it, but not Adele. After a break of several years, she returned in 2015 with “Hello,” which shook the music industry to its very core, as well as anyone who heard it. The track focuses on regrets from the past. The tune starts off as many Adele cuts do, with her singing over a piano, but by the end, it’s a grandiose affair, complete with an orchestra, backing vocalists, and more.

As she ushered in her 25 era, the third era of her career, Adele proved once more that heartbreak sells. The single easily became a No. 1 in pretty much every country, and it still stands as the only song in U.S. history to sell a million copies in a week. The heart-grabber won the British powerhouse her second Record of the Year and Song of the Year Grammys (following “Rolling in the Deep”) and it remains a favorite among fans.

Throughout her career, Adele has released a handful of covers, and one stands out from the rest. The Oscar winner’s take on Bonnie Raitt’s 1991 classic “I Can't Make You Love Me” was featured on both her iTunes Festival: London 2011 EP and her video album Live at the Royal Albert Hall.

“I Can't Make You Love Me” is so perfectly written, and it’s soul-crushing no matter who sings it. Musicians like George Michael, Boyz II Men, and even Bon Iver have put their own spin on it. While they’re all worth hearing, no remake compares to Adele’s, which highlights both her ability to deliver in a live setting and that with just her voice and some choice words, she can hold anyone’s heart in her hands and squeeze. Tight.

Despite never being released as a single, Adele’s “All I Ask” has been chosen by fans as one of the best songs on 25, and when it comes to her, “best” translates to “most heartbreaking.” The tune was so popular, it managed to chart in many major markets based solely off of very strong sales.

Unexpectedly, “All I Ask” was produced and co-written by Bruno Mars and his team The Smeezingtons. The group behind such smashes as CeeLo’s “F*** You,” Snoop Dogg and Wiz Khalifa’s “Young, Wild & Free,” and many of Mars’ hits like “Locked Out of Heaven” and “Grenade,” it’s almost difficult to believe the final product is so melancholy, as opposed to upbeat and catchy. It works nonetheless, and one of the better releases from her latest full-length demonstrates that even Adele’s deeper cuts are must-hears.

More like this
Adele Is Attending The 2023 Grammys, Thank You Very Much
By Jake Viswanath
Jay-Z Is Performing At The Grammys, Meaning Beyoncé Might Actually Show Up
By Jake Viswanath
Taylor Swift May Miss The 2023 Grammys For Reasons Fans Know “All Too Well”
By Jake Viswanath
Taylor Lautner Thought Taylor Swift's 2009 VMAs Interruption Was A "Skit"
By Alyssa Lapid
Get Even More From Bustle — Sign Up For The Newsletter
From hair trends to relationship advice, our daily newsletter has everything you need to sound like a person who’s on TikTok, even if you aren’t.