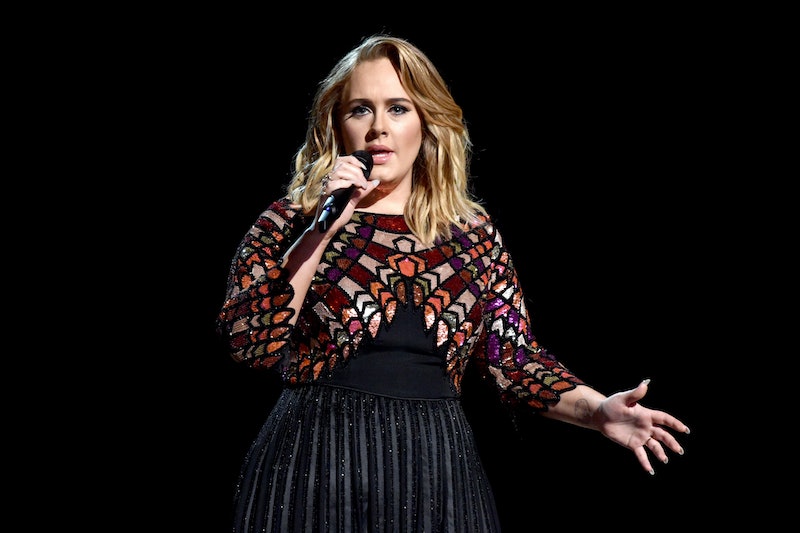 Adele is known for her gut-wrenchingly emotional songs, with her catalog including devastating breakup ballads from “Someone Like You” to “Hello.” Following a six-year break from music, the British singer has taken over the world yet again with her new album, 30, released Nov. 19. Inspired by her recent divorce from Simon Konecki after three years of marriage, the ultra-vulnerable record chronicles Adele’s healing process as well as her tight-knit bond with her 9-year-old son, Angelo. While she’s no stranger to writing about the deepest aspects of her personal life, the new album tackles topics too personal to relive on stage — even for the ever-experienced singer-songwriter. In a new interview, Adele revealed the one song she’ll never perform live from 30.

During a Nov. 22 appearance on the Spout Podcast, the 33-year-old musician spoke about her piano ballad “To Be Loved,” which features lyrics seemingly detailing the difficult process of deciding to leave her marriage for the sake of her own happiness. “Let it be known that I will choose to lose / It's a sacrifice, but I can't live a lie / Let it be known, let it be known that I tried,” sings Adele on the track.

Speaking to host Tamara Dhia during the interview, she explained her struggle with revisiting the song. “I’ve only really sung it a few times and definitely can’t even really listen to it without getting emotional,” she said. “So, I will not be performing that one live... No, never.”

In lieu of performing “To Be Loved” on tour, Adele previewed the track prior to 30’s release in a video posted to her social media platforms on Nov. 17. Over its simple piano accompaniment, she gave the song no introduction and belted its powerful chorus from the comfort of her living room: “To be loved and love at the highest count / Means to lose all the things I can't live without / Let it be known that I will choose to lose / It's a sacrifice, but I can't live a lie.”

More like this
Beyoncé & Blue Ivy Performed A "Brown Skin Girl" Duet At Her Private Dubai Concert
By Brad Witter
Ariana Grande & Kristin Chenoweth Sing A Wizard Of Oz Classic On TikTok
By Alyssa Lapid
RHOP’s Robyn Dixon Explained Why Juan Paid For Another Woman's Hotel Room
By Brad Witter
Twitter Is Saying The Same Thing About Beyoncé's Renaissance World Tour
By Shahed Ezaydi
Get Even More From Bustle — Sign Up For The Newsletter
From hair trends to relationship advice, our daily newsletter has everything you need to sound like a person who’s on TikTok, even if you aren’t.