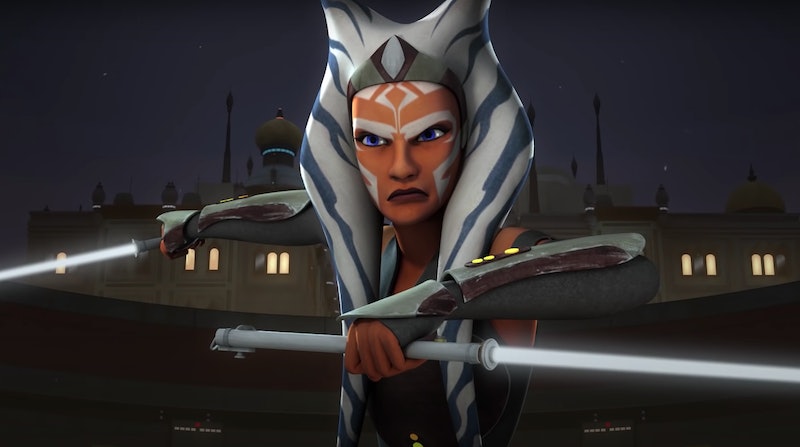 Out of all the characters rumored to appear in The Mandalorian Season 2, Ahsoka Tano looms the largest. Credited as the first lead female Jedi, Ahsoka has become one of the most well-known figures in Star Wars canon. She's a central character in both The Clone Wars and Rebels animated series, and her possible inclusion in The Mandalorian would likely introduce Baby Yoda and Mando to the rebellion and even the Jedi.

Ahsoka first appeared in the 2008 Clone Wars film and subsequent TV show. A 14-year-old wise-cracking Togruta alien, she was the young Jedi apprentice assigned to Anakin Skywalker in order to teach him responsibility. At first, their relationship was contentious — he nicknamed her "Snips" for her snippy attitude — but they eventually grew to have a mutual love and respect for one another. After being wrongfully blamed for a terrorist attack, Ahsoka left the Jedi Order, and as a result never saw Anakin become Darth Vader. She later returned as a rebel agent by the name of "Fulcrum" in Star Wars Rebels, and even fought her former mentor. The last time audiences saw Ahsoka, she was traveling with Sabine Wren — who is also rumored to appear in The Mandalorian — to look for Star Wars Rebels protagonist Ezra.

Though she's now a fan favorite, Ahsoka was pretty unpopular when she was first introduced. "It’s been well documented how snippy she was in the beginning and, quite frankly, how people thought she was very annoying and didn’t like her," Ahsoka's voice actor Ashley Eckstein told StarWars.com in 2016. "She would ask questions and talk back, and that very much was and became an endearing part of her personality over time. But in the beginning it was just like, 'Oh, my gosh, who is this 14-year-old girl talking to Anakin Skywalker this way?'"

Eventually, Ahsoka won her critics over, with Clone Wars showrunner Dave Filoni likening her arc to Luke Skywalker's. Rather than give in to her worst traits and fall to the dark side like Anakin, Ahsoka became a level-headed leader and mentor in her own right. "I think people like Ahsoka because they relate to her," Filoni told Deadline. "I think that her being very young and very brash allowed her to progress and grow as a character over a long period of time. When people go and watch Luke Skywalker as a young man in A New Hope, a lot of people commented, 'Oh, he sounds whiny.' George [Lucas] knew to begin with a character of inexperience, whether we like that or not, and grow them in a way that the audience came to respect them."

Journalist Amy Richau reiterated that sentiment in a recent interview with Vanity Fair. "It’s a cliché to say that Star Wars is all about hope, but it’s hard to think of a character that personifies hope more than Ahsoka," she said. "Her character is introduced during the Clone Wars right when everything is falling apart for Anakin, Padmé, Kenobi, and the Jedi. Even in the darkest days of the Empire ... [she’s there] doing everything she can, risking it all to defeat the Imperials, never giving up."

Ahsoka's popularity endures today. According to CNBC, her figurines are some of the best-selling Star Wars collectibles on the market. And in 2016, E.K. Johnston released a YA novel about the period after Ahsoka left the Jedi Order but before she became a rebel operative. "One of the reasons there was the Ahsoka novel was that I wanted to test the waters: does this character work outside of the medium of animation?" Filoni explained to Vanity Fair. The novel was a huge hit, becoming No. 1 on The New York Times Best Sellers list for YA books shortly after its release.

If Ahsoka does appear in The Mandalorian, it will mark her live-action debut and pave the way for Mando to eventually become aware of — or even a part of — the rebellion. Some have even suggested she could become a Jedi mentor for Baby Yoda, or train Mando to be a Jedi in his own right.

It's an exciting prospect, but Disney has not officially confirmed Ahsoka's role in The Mandalorian. Rosario Dawson is rumored to play the character, but her casting has been marred by controversy. In October 2019, Dedrek Finley alleged that Dawson and her family subjected him to transphobic harassment after he came out to them as trans during a 2018 renovation of Dawson's home. The suit claimed that Dawson and her family misgendered Finley constantly and assaulted him on the front lawn, per NBC News. (Dawson's lawyer called the accusations "false and baseless.") The case led to a Twitter hastag to #RecastAhsoka, with many seeing Dawson's alleged actions as the antithesis of what Ahsoka stands for.

The lawsuit is ongoing, but the accusations have dampened excitement about seeing Dawson's Ahsoka onscreen. The character may be Star Wars' best representation of hope, but for some Mandalorian fans, that light has dimmed.

More like this
The 'Andor' Timeline, Explained
By Gretchen Smail
Nicola Coughlan Shared A Lady Whistledown Excerpt From ‘Bridgerton’ Season 3
By Grace Wehniainen, Alyssa Lapid and Sam Ramsden
A New 'And Just Like That' Table Read Pic Confirms A Key Character's Return
By Jack Irvin and Grace Wehniainen
Viserys’ Fate On 'House Of The Dragon' Could Differ From The Book In This Surprising Way
By Grace Wehniainen
Get Even More From Bustle — Sign Up For The Newsletter