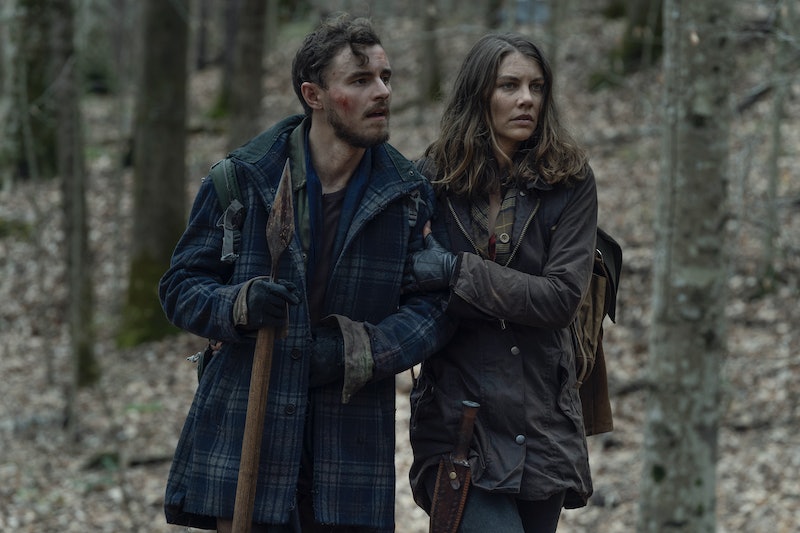 Spoilers ahead for The Walking Dead Season 11, Episode 3. Alden is the latest person to feel the wrath of the Reapers. In the Sept. 5 episode of The Walking Dead, he’s wounded during a skirmish in a department store. He’s left to lay low while Maggie and Negan continue their ill-fated supply run, but things aren’t looking great for the friendly Savior-turned-ally. For starters, he’s in a church, and we know that the Reapers love religious symbolism. He’s also been leaning into the role of moral compass lately — which, as longtime fans know, is never a good sign. RIP Dale, Bob, Sasha, and Carl.

Alden isn’t in The Walking Dead comics, so there aren’t any clues to be gleaned about his fate from them. But it’s possible the writers borrowed parts of his storyline from other comics characters. Several fans and outlets have theorized he’s a stand-in for Dante, who was a Whisperer spy on the show but an ally in the comics. In a 2019 interview with Entertainment Weekly, Walking Dead showrunner Angela Kang described Dante as a “roguish, fast-talking, sometimes charming, sometimes annoying guy who can sometimes put his foot in his mouth,” which doesn’t sound too far off from the witty Alden.

Furthermore, Dante had a relationship with Maggie in the comics and was there for her turbulent conflict with Negan — something the show also seems to be replicating with Alden’s storyline. Screen Rant described Alden as “the best possible replacement” for Dante due to his existing emotional connection with Maggie, while Undead Walking noted the “puppy love” crush Alden seemed to have on her from their earliest interaction.

Indeed, Alden and Maggie share an unspoken bond through the loss of Enid — who Alden dated and Maggie acted as sort of a big sister to — and there’s definitely a connection between the two. In Episode 3, Alden outright told Maggie she was the reason he ditched the Saviors. “I trust you to do the right thing, no matter how hard it is or how much it costs you,” he said in a quiet moment.

It’s worth noting, too, that Maggie spent an entire episode slowly helping an injured Alden — who knowingly calls himself “dead weight” — after refusing to help another member of her group in Episode 2 (remember that terrifying subway scene?). She’s been pretty clear about taking emotion out of the equation when it comes to saving lives, so the fact that she’s so torn up about Alden feels significant. Here’s hoping he’s still alive and well when (if?) Maggie and Negan make it back to the church.

More like this
A New 'And Just Like That' Table Read Pic Confirms A Key Character's Return
By Jack Irvin and Grace Wehniainen
Viserys’ Fate On 'House Of The Dragon' Could Differ From The Book In This Surprising Way
By Grace Wehniainen
'The Lord of the Rings: The Rings of Power' Revisits Iconic Spots From 'The Hobbit'
By Darshita Goyal
The First 'Percy Jackson & The Olympians' Teaser Comes With An Ominous Warning
By Grace Wehniainen
Get Even More From Bustle — Sign Up For The Newsletter