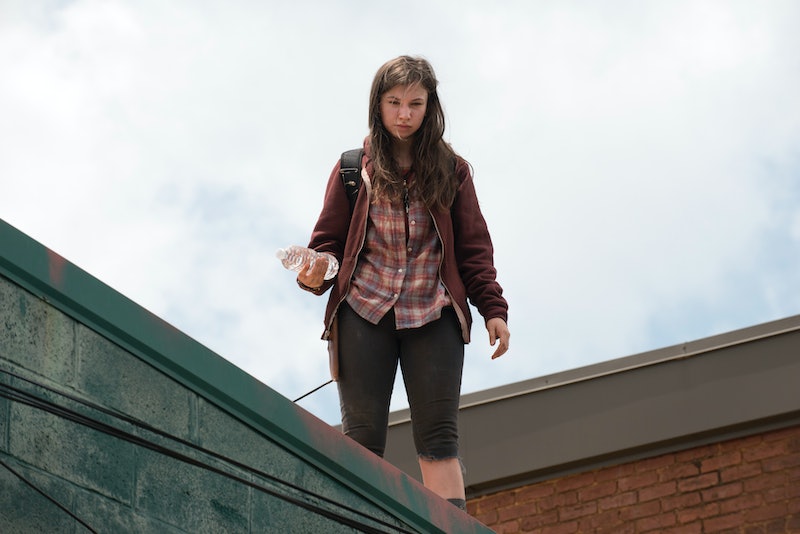 Just because someone tossed you a water bottle in your time of need, does that mean you have to be indebted to them? Well, if you're Glenn Rhee the answer is yes, since he's intent on getting Enid on The Walking Dead safely back to Alexandria. The problem, besides the walls of Alexandria tumbling to the ground, is that fans still haven't decided whether or not the teen can be trusted — and if Enid is one of the Wolves.

After the jubilation of Glenn still being alive passed, it was time to get annoyed at the do-gooder for trying to coax Enid back to civilization with him. Enid fled Alexandria after the Wolves infiltrated back in the episode "JSS," and she just so happened to be in the right place at the right time to give Glenn some much needed hydration in "Heads Up." But after giving him some water, Enid really just caused Glenn grief by pointing a gun at him (not cool, Enid!) and then refusing to join him in his quest back to relative safety.

So what gives, Enid? Is it like what Red said in The Shawshank Redemption, "Some birds aren't meant to be caged," or are you hiding something? Because when you're living in the zombie apocalypse, a semi-safe cage isn't that bad of a deal.

Although Chris Hardwick himself seemed skeptical on Talking Dead on Nov. 22 that Enid is a Wolf, actress Katelyn Nacon gave a vague answer about her potential connection to the murderous crew to the Huffington Post. "I mean, there’s obvious — well, there have been, like, hints here and there that the theories are true, so it could go either way," she said, which cleared nothing up whatsoever.

While I am not personally sold on the fact that Enid is a part of the Wolves (where's the "W" on her forehead?), she has been a person of interest since her character first premiered in Season 5. But if Enid isn't on the bad side, I can at least safely say she's super annoying. (Hey, Enid! Can't you at least tell Glenn what you know of Maggie's fate?)

In the midseason finale on Nov. 29, Glenn and Enid will continue to move toward Alexandria. And in the below preview clip, she visibly softens when she finds out that Maggie is pregnant.

Her reaction to Glenn's news that his wife is pregnant could simply be that she's just a decent human being who now feels bad that Glenn had to drag her back to Alexandria. Or there could be more guilt at the fact that she's part of a bigger, evil plan that will threaten to endanger Glenn's family. At least now Maggie knows that Glenn is returning to her, thanks to Enid's green balloons (although why the hell Maggie took that as such a definite sign is beyond me). But, allow me to be cynical about Enid's character one last time and wonder why she thought the balloons were such a good distraction tactic in the first place. If Maggie read them as a sign, couldn't people looking for Enid (aka the Wolves) read them as a sign too?

Although I wouldn't put it past The Walking Dead to throw us for another loop, I think that Enid is just a troubled young girl who unfortunately had to survive on her own. She found a community, but couldn't fit in. And though it's not going to be a safe trip back to Alexandria, Papa Bear Glenn — channeling his father-to-be instincts — is going to help Enid by showing her that he cares enough to bring her home. And then she may consider that maybe she does need a family, or at least other people, to help her survive in this crazy world... those other people just better not be Wolves.