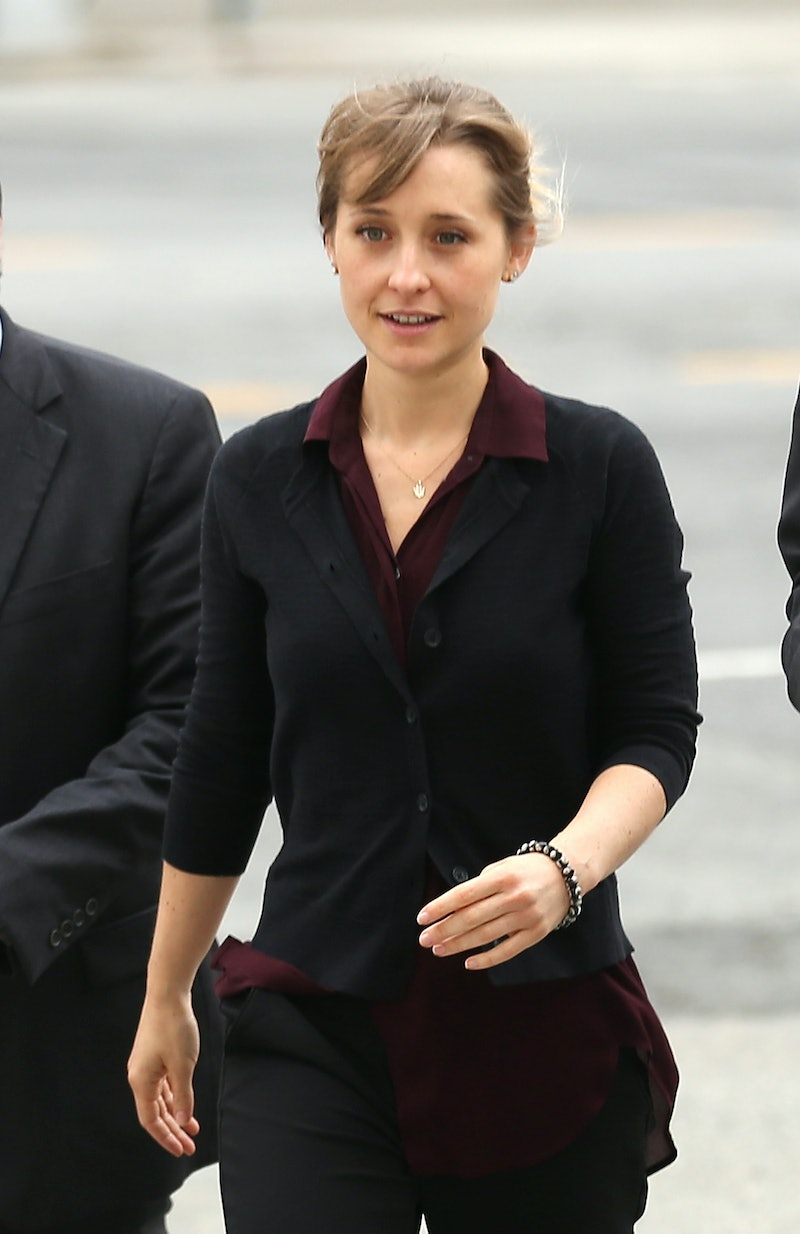 After pleading guilty to racketeering charges and apologizing for her involvement in the cult-like "self-help" group NXIVM, Smallville actor Allison Mack is making headlines again. As reported by Entertainment Weekly and TMZ, the Canadian native filed for divorce from Nicki Clyne, who she reportedly married in February 2017 "at the behest of NXIVM co-founder Keith Raniere" to avoid deportation and remain active in the group. But as NXIVM faced legal issues, Clyne and Mack's relationship changed, which could explain the Dec. 11 filing.

Ahead of Raniere's October sentencing, Clyne defended the group's leader, telling CBS, "It’s very unfortunate the way that the word NXIVM has been applied and is now synonymous with the term 'sex cult' — which I don’t even know how to define what that is." In the same interview, Clyne hinted at her marriage status and said she hadn't been able to speak to Mack in more than a year. "Part of the conditions of her bail is that she can't speak to anyone who is affiliated in any way with the case or NXIVM," she said. "This has been the hardest, most humbling experience of my life."

In April 2019, Mack, a leader in NXIVM and one of the primary subjects of HBO's The Vow, pleaded guilty to one count of racketeering and racketeering conspiracy. In an interview with The New York Times, she revealed that branding group members with Raniere's initials was her idea. According to CNN, her plea deal helped her avoid more serious charges like "sex trafficking, sex trafficking conspiracy, and forced labor conspiracy."

Not much else has been reported regarding the estranged couple's impending divorce, but Mack and the Battlestar Galactica actor don't share any children, so they won't have to work out custody agreements.

This story will be updated when more information becomes available.

More like this
'MAFS UK' Changed The Rules After Matt & Whitney Cheated On Their Partners
By Catharina Cheung
Hailey Bieber Just Responded To *That* Viral Met Gala Moment
By Radhika Menon and Sam Ramsden
Dixie D’Amelio & Noah Beck “Love Each Other” Despite Breakup Rumors
By Julia Emmanuele, Jordyn Tilchen and Grace Wehniainen
Molly-Mae Hague & Tommy Fury Celebrate Pregnancy Reveal In The Sweetest Way
By Sophie McEvoy and Sam Ramsden
Get Even More From Bustle — Sign Up For The Newsletter