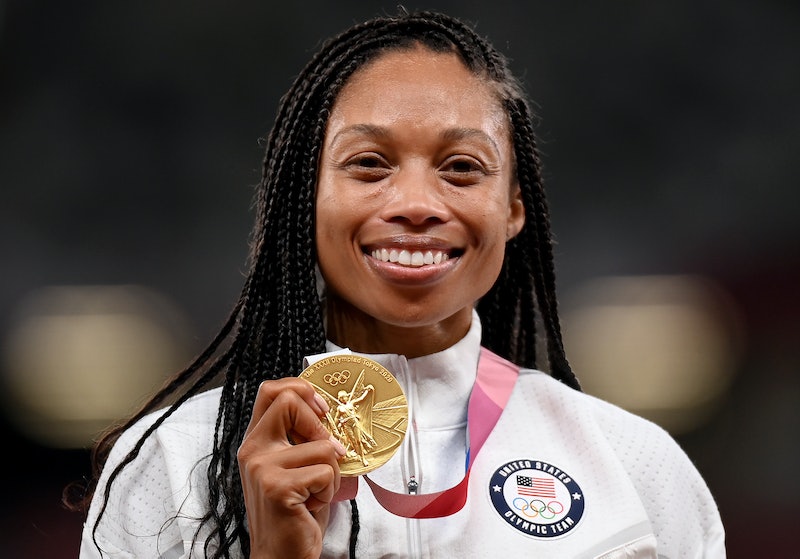 The Tokyo Olympics is nearly over, but competing athletes are still delivering record-breaking performances in full force. In the 400-meter track and field final on Aug. 6, Team USA sprinter Allyson Felix scored the bronze from lane 9 — making her the most decorated female Olympian in the sport with 10 medals. Then, just a day later, she followed it up with a gold medal in the women’s 4x400 relay and became the U.S. track and field athlete with the most Olympic medals ever.

It’s an especially impressive feat for the 35-year-old athlete, who won her first Olympic medal at 18 years old during the 2004 Athens Games. In Tokyo, she clocked a lifetime best time of 49.46 in the 400, per NBC News, surpassing Jamaican Merlene Ottey’s record for most Olympic medals earned by a female track athlete as well as tying the legendary Carl Lewis for the most medals won by an American track athlete of any gender. With teammates Sydney McLaughlin, Dalilah Muhammad, and Athing Mu in the 4x400, Felix contributed to a team victory by a margin of almost 4 seconds, which carried her past Lewis, who won 10 medals (nine gold and one silver) across four Olympics.

Reacting on social media after her 11th medal, Felix celebrated her major accomplishment and her teammates. “This is a special group of women who will continue to shape the world around them,” Felix wrote in part. “This moment. These women. It’s more than what I could have dreamt of!!!”

The 11-time Olympic medalist qualified for her fifth Summer Olympics in June after finishing second in the 400-meter race at the United States trials. Felix’s 49.46-second sprint was her best time yet in Tokyo, as well as her first sub-50 run since she survived the near-fatal pregnancy and birth of her daughter, Camryn. After Felix endured an emergency cesarean section on Nov. 28, 2018, just 32 weeks into her pregnancy, her now-2-year-old daughter spent her first weeks in the neonatal intensive care unit. At the 400-meter race, Felix’s fellow runner husband, Kenneth Ferguson, held Camryn on the sidelines.

“This is so much bigger than running fast,” she told NBC Nightly News ahead of the Aug. 6 race. “It’s showing women that we can be present at home, and we can also thrive in our professions.”

Following her historic showings, Felix’s supporters took to social media to express their excitement about the achievement, including Lewis, who congratulated her via Twitter on Aug. 6 on “an amazing career and inspiration.”

This article was originally published on Aug. 6, 2021