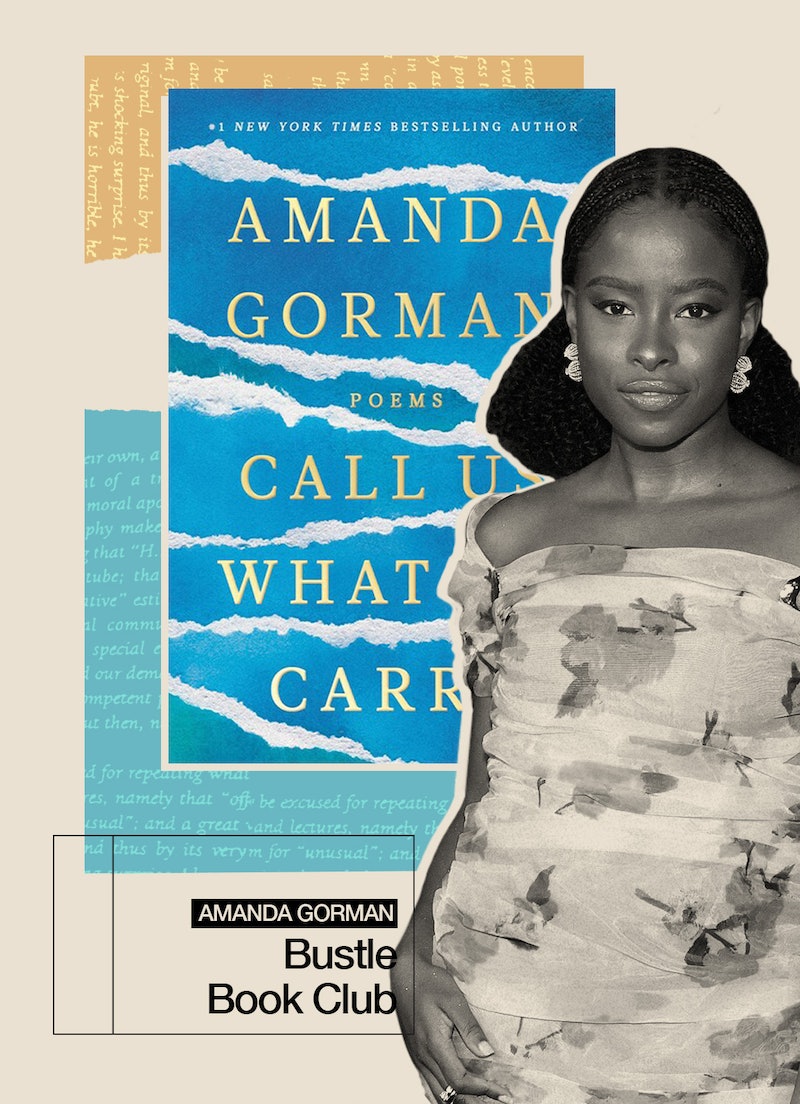 They say imitation is the sincerest form of flattery; such was the case when an adolescent Amanda Gorman attempted to copy Toni Morrison’s writing style. Gorman, then in sixth grade, was working on a “really bad novel” — the premise of which she’s still too embarrassed to reveal — and she pored over Morrison’s work for inspiration. “I would spend so many days with The Bluest Eye in my lap, and I’d try to identify what I loved about Toni’s rhetoric, language, storytelling,” Gorman tells Bustle. “I might pick the scene where the main character is trying to buy a piece of candy and look at the metaphors, then [I’d think about them in terms of] my own scene in the novel I was trying to write.”

Now, over a decade later, it’s not hard to imagine some young, would-be writer trying to decode Gorman’s work. At 22, Gorman became the youngest poet to read at a presidential inauguration. Now 23, she’s the author of the newly released poetry collection, Call Us What We Carry. And while Gorman’s writing process has changed since her pre-teen days, her attention to craft remains constant. “When I was younger, I was learning [about technique]. Now that I have my toolbox that I can use when I sit down to write, I try to think really rigorously about my inspiration,” she explains. “My process is a bit more crazy and open and free because I have all that training behind me. Now I can just vomit on the paper and craft from there.”

Though her routine has matured with time, Gorman freely admits the student isn’t ready to play master just yet. “I can glow up. I can do that, but I can't grow up,” she says.

Below, Gorman reflects on writing to instrumental soundtracks, drinking Pedialyte, and her love of Saint Hoax.

On a day in her writing life:

I wake up and spend at least half an hour reading a new collection or something that I think will be good to think about as I move to my own writing. As I'm reading and different ideas and questions come to my head, I'll write them down in a notebook. Then when I move to the actual writing part of the day, I'll look back at that notebook.

The afternoon will be spent looking at what I just put down on paper and editing it and taking some things out. By the late afternoon, I'll typically take a walk around my neighborhood and that gets me out of my head and out of the page. Those are the moments when the closing thoughts for a poem, the most core refrains in the poem, will become clear. So then I come back after my walk, maybe write for another half hour, and then it's the end of the day.

On her Pedialyte habit:

I'll drink a lot of Pedialyte because it's really easy for me to become so engrossed in writing that [I] basically become dehydrated and underfed. I just don't think of those primary bodily necessities. So if I can have a full, steaming cup of tea — or any type of water with electrolytes in it — then I know at least today, I wasn't like a reptile existing off of a tablespoon of liquid.

On the importance of reading biographies:

[The book] I literally have on my lap right now is Team of Rivals by Doris Kearns Goodwin. It's the book that inspired the Steven Spielberg film [Lincoln]. What I like most about this one is typically when we read biographies, we're getting a very singular look at a figure. But because it's called “Team of Rivals,” it's looking at Lincoln, the men who rivaled him, and the men he'd have to build bonds and alliances with. Having that kind of full, dimensional understanding of a person is so helpful as a reader. I like to bring that type of multidimensionality to the characters, people, and themes that I write in my own poetry.

On her writing playlists:

I have one [playlist] that's called “The Writer On Her Work.” It’s basically all the tracks from films that are about women writers. So it might be something from Dickinson, The Guernsey Literary and Potato Peel Pie Society, or Little Women. But my general writing playlist tends to be the instrumental soundtracks to films. It’s a lot of Hans Zimmer, Michael Giacchino — who you might know most from Disney and Pixar films — and Dario Marianelli.

On the merits of procrastinating:

I think procrastination can be a really helpful creative tool. So when I procrastinate, I try to do it with intention. I'm like, “For the next hour and a half, I'm going to procrastinate.” I think my writing tends to be stronger after that because I'm giving myself the time and the space to ideate and create. When I procrastinate, it’s a lot of going on social media — I love a good meme, so [I’ll look at] Saint Hoax, for example — maybe binge-watching some show or spending time watching funny dog videos on YouTube.