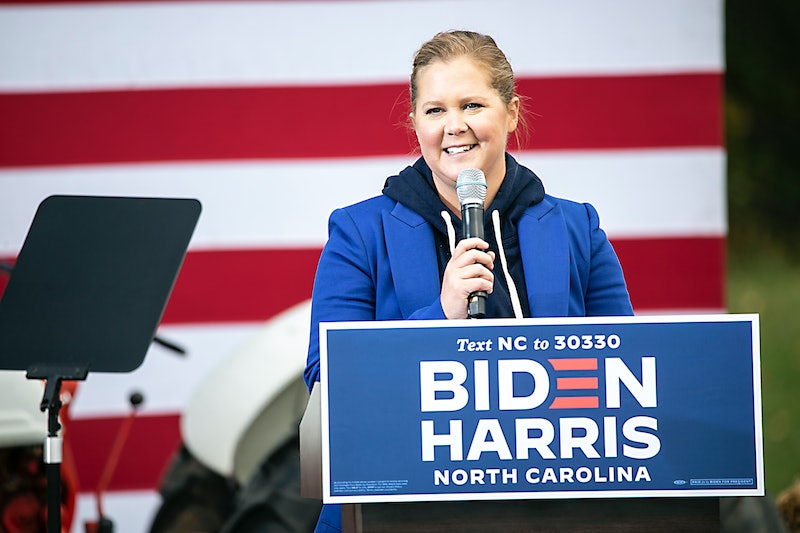 The 2021 presidential inauguration obviously inspired, because Amy Schumer went full-on J. Lo during her son’s bedtime in a recent Instagram video. On Saturday, Jan. 23, the comedian posted footage of her and husband Chris Fischer getting their 1-year-old son, Gene, ready for bed, and while they did so, Schumer belted out the lyrics, “let’s get loud,” from Jennifer Lopez’s 2000 hit of the same name. Just three days prior, J. Lo had done the same during her inauguration performance on the steps of the U.S. Capitol, mixing the lyrics into her rendition of “This Land Is Your Land” and “America the Beautiful.”

For most parents, “Let’s Get Loud” probably isn’t their lullaby of choice, but it seemed to work for Schumer. Neither her son nor Fischer seem fazed in the video; Gene briefly stilled while she sang to him, and then he quickly went back to squirming as his dad worked on getting him into his pajamas. For Schumer, it was just a special addition to their nighttime routine.

“Bedtime is precious,” the I Feel Pretty star captioned her Instagram post with the special family moment.

Many of her fans quickly made the connection to J. Lo’s inauguration performance, but while some saw it as a compliment, others questioned if she was throwing shade. “Amazing at the inaugural ceremony,” one wrote, while another commented, “So appropriately placed, not at all cringey…. like a certain inauguration.” Still another fan replied to a critic that “only people who don't know the message behind let's get loud found it awkward.”

Regardless of what people were saying in the comments, the post was J. Lo-approved. The singer — and fellow mom — shared Schumer’s video in her stories on Sunday, Jan. 24, adding, “Sing it, @amyschumer!!!” and “LOL.” She had also shared footage of her performance on Thursday, Jan. 21, writing, “Unity is the path forward.” Both Lopez and Schumer had supported President Joe Biden during his campaign.

Schumer’s bedtime post is just one of the many she has shared on social media depicting her parenting journey. In mid-January, she talked about a common issue today’s parents have to address: screen time. “We decided to do no screen time at all for our son,” she said in a video, sharing how “every family is different” and they’re choosing to focus on books… except for when Gene is watching TV.

Well, like she says, “every family is different.” Case in point: Some parents opt for classic lullabies at bedtime, and others channel J. Lo.