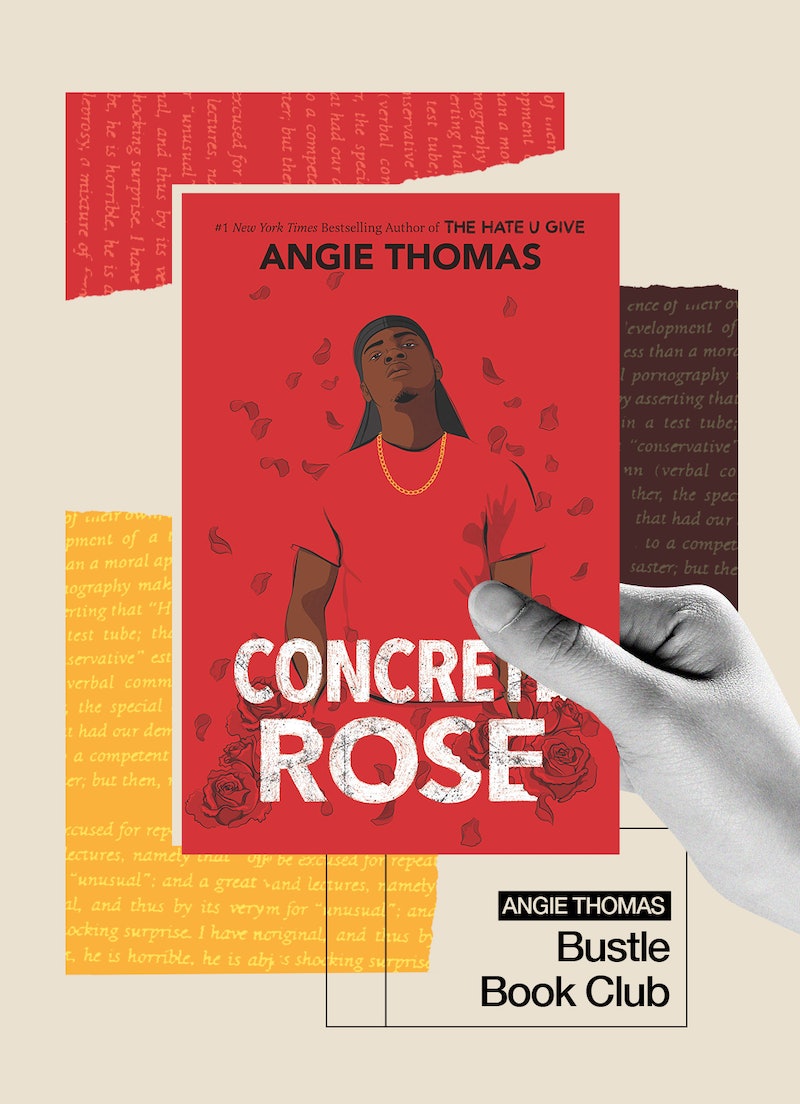 Angie Thomas is out with Concrete Rose, her new prequel to The Hate U Give
Bustle Book Club

When Angie Thomas set out on the book tour for her 2017 debut novel The Hate U Give, she received a surprising bit of reader feedback. It wasn't Starr Carter, the novel’s 16-year-old protagonist, that fans were the most eager to talk about. Instead, it was Starr’s father Maverick, a former gang member-turned grocery store owner who nurtures his daughter’s abilities and believes in her strength. “I had kids coming up to me in line saying that Maverick reminds them of their dad," Thomas tells Bustle. "I also had their moms coming up behind them in line saying, ‘Oh my god, I love me some Maverick, I wanna marry me a Maverick!’”

It never crossed Thomas’ mind to return to the Carters for a future project, let alone to center a novel on the family's patriarch. But the love from readers, combined with Russell Hornsby’s stunning portrayal of the character in the 2018 film adaptation, was all the motivation she needed to revisit the Carter family. (Not to mention that Maverick just so happens to be Thomas' favorite character she's ever written, too.) The result is Concrete Rose, a prequel to The Hate U Give that takes place several decades before the events of her debut and focuses on a 17-year-old Maverick. In it, Maverick juggles dealing drugs for a local gang and becoming a first-time father with trying to help his overworked mother while his father is incarcerated.

Much like Thomas’ previous writing, Concrete Rose is a nuanced portrayal of Black life, this time focusing on the difficult contradictions of Black boyhood. “When you’re writing an identity outside of your own, the least you could do is respect that identity enough to get it right,” Thomas says of the research she did to write from a Black teenage boy's perspective. “I recognize that that comes with the territory. If you’re going to do this, be prepared for the criticism.”

Concrete Rose marks Thomas' third young adult novel, a genre that she has no intention of writing outside of anytime soon. While some authors may aspire to try their hand at adult fiction, Thomas maintains that YA books — and by extension, middle grade books, which she's exploring for her next project — are the most important genre on the market. “Young people who read my books today are the leaders of tomorrow,” she says. “They’re going to be in these positions that determine if systemic racism continues or not, and I take what I do seriously in that regard. I’ve given up on adults!”

Below, Thomas talks about the superiority of golden kiwis, immortal Apple batteries, and building basement bowling alleys for her Sims.

On her love-hate relationship with her laptop battery:

I unplug my laptop once it’s fully charged and write until the battery is almost dead. Then I take a break while it charges. I learned that tip from [writer] Adam Silvera. It has worked out for me, although Apple keeps making these batteries that don’t want to die. But lately routines are out of the window with quarantine. You’d think, “Oh, because you’re home, you have all the time in the world!” Yeah, but my brain does not have all the space.

On listening to twerk music:

My music [taste] definitely depends on the book. For Concrete Rose, that was a '90s hip-hop playlist all the way through, [because] I had an excuse to listen to that stuff. Now I’m doing a middle grade [book] and I’m not listening to the same kind of stuff. Each book looks a bit different. Concrete Rose was a lot of Tupac and Southern hip-hop like Outkast and Goodie Mob. But I can’t listen to twerk music with this [new] book! I mean I could, but we wouldn’t know what would happen on the page. Let’s not do that.

On procrastinating with The Sims:

I paused playing The Sims to do this interview! I just created a dream house with a bowling alley and movie theater in the basement. I’m so excited about it. I give my Sims all the money. I tried to play this Sim the normal way, like [earning] your way through life, then after a while it’s like, “No, you just got out of college. You need a bowling alley in your house.”

On her favorite kind of kiwis:

I love to snack on fruit while I’m working. Fruit and baked Cheetos. I love persimmons and I love golden kiwis. Golden kiwis are so much better than the green ones. I also have a bad habit of ordering delivery even though I have food. I get so caught up in writing that I’m like, “Oh, I forgot to cook. Let me order something…” Right now I’m into tacos. There’s a place here [in Jackson, Miss.,] called Green Ghost Tacos, and I think I could order from them every single day.

More like this
What Is A "Hot Girl Book" & Why Is Everyone Talking About Them?
By Samantha Leach
10 Must-Read New Books Out This Week
By K.W. Colyard
Nicola Coughlan Shared A Lady Whistledown Excerpt From ‘Bridgerton’ Season 3
By Grace Wehniainen, Alyssa Lapid and Sam Ramsden
Read The First Pages Of Emma Rosenblum’s Highly Anticipated Debut, 'Bad Summer People'
By Samantha Leach
Get Even More From Bustle — Sign Up For The Newsletter