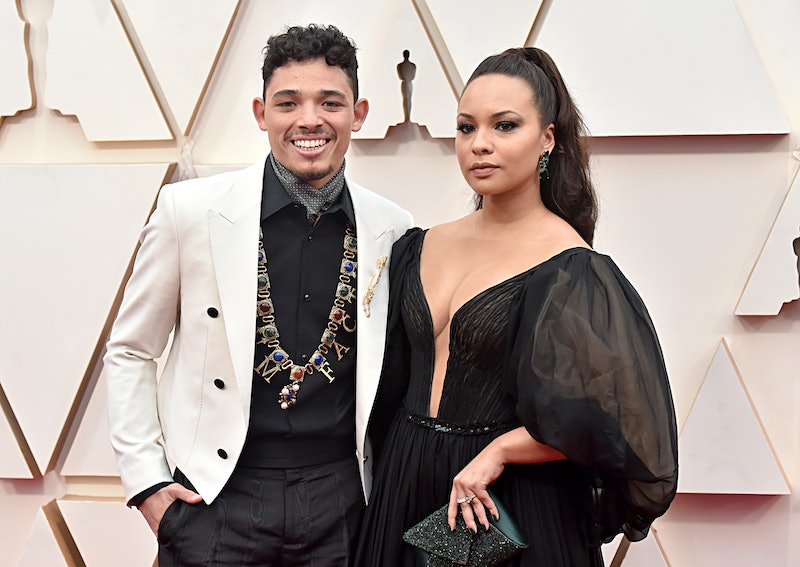 It’s been months since In The Heights hit theaters and HBO Max, and fans are still keeping up with Anthony Ramos. The 30-year-old actor starred in the film adaptation as Usnavi de la Vega, a first-generation Dominican-American and the owner of a small bodega in the Washington Heights neighborhood of New York City. But as interest in the film surged following its release, so did interest in Ramos’ relationship status. At the time, he was engaged to entertainer Jasmine Cephas Jones, 32, but it seems their relationship timeline has come to an end.

If you’re unfamiliar with the former couple, you should know that they were together for roughly six years. The two met while working together on Lin-Manuel Miranda’s Hamilton, and the creator totally knew they were meant for each other. Unfortunately, no one could have predicted their breakup after a three-year engagement, as reported by E! News on Nov. 30. Here’s the couple’s entire relationship timeline, from Miranda’s uncanny prediction to their split in 2021.

Ramos and Cephas Jones met in 2014 during Hamilton rehearsals, according to Entertainment Tonight. The musical made its off-Broadway debut the following year, and Miranda knew the duo’s connection was undeniable. In 2019, the playwright reflected on the pair’s first table-read together, making it clear that they were meant to be together from the start.

At the end of the year, the couple made it clear that they would be heading into 2015 together. On New Year’s Eve, Cephas Jones shared a photo of her and Ramos with horns in their mouths and party hats on their heads. If we had to guess, it’s also likely they shared a kiss at midnight.

Although the two seemed very solid at the start of the new year, they actually didn’t make their relationship official until February. Fans, of course, didn’t know this until several years later when Ramos posted about their anniversary on Instagram. “I love you because of this right here,” Jones wrote in 2017 alongside a goofy Skype screenshot. “2 years yesterday/today (Anniversary spills into the evemornin).” After calling himself “blessed” to see her smile every day, Ramos promised to keep their toiletries stocked for the rest of their days. That was sweet.

Throughout the year, the pair continued to share photos together, including one from behind the scenes of Hamilton. “Chillen like its 1776,” Cephas Jones wrote in April alongside a picture of the couple wearing their extremely dated costumes. A few months later, the musical made its Broadway debut, marking one of the most exciting moments of the couple’s lives.

2016 marked many firsts for the couple — including a visit to the White House, 11 Tony awards, and their first Grammy. During the February award show, the Hamilton cast won Best Musical Theater Album. Later that year, as Ramos bid farewell to the Broadway show, Cephas Jones shared a photo of him holding the award. “Happy Trails to the love of my life @anthony_ramos_nyc,” she wrote. “You give your heart and soul every night 8 times a week and I’m going to miss sharing the stage with you. Now go on and be the shining bright star that you are!!!”

2017: Supporting Each Other On Social

Despite no longer working together, their relationship only seemed to get stronger. In July, the In The Heights star posted a birthday tribute to his girlfriend. “This is your year Jas,” he wrote alongside a grainy photo of Cephas Jones in a recording studio. “I thank God every day for the Blessing it is to walk behind you on this journey. Go get em baby. Happy Birthday. Straight to da [top].”

The following October, the Will & Grace actor sent her boyfriend some birthday wishes of her own. “Today this little boy from the Bushwick projects in Brooklyn was born and became the most kind, talented, giving and loving man,” she captioned a picture of Ramos playing chess. “Words can’t describe how proud and inspired I am of your work ethic and how you still have time to give to others and love unconditionally. You have a special light that shines so bright and you bring out the light in others. That is why I love you. Happy Birthday you beautiful soul.”

2018 was another big year for the pair, and not just because their schedules were jam-packed with premieres. In addition to hitting the red carpet for Cephas Jones’ film Blindspotting in July and again in September for A Star Is Born, this marked the year that the two started working together again. The film Monsters and Men was their first project together since Hamilton, and at the end of the year, they starred alongside each other again in a movie called Honest Thief.

“Working with Jasmine, being able to work with my other half, that’s the dream,” the actor said in a Monsters and Men interview with Blackfilm.com. “We’ve been together for three and a half years now and it’s been amazing. And then now, fast forward, you’re working with your girl on this film and we’re in this apartment and I see her come out the room after she changes into her costume for the first time with this pregnant belly and you know, we ain’t got a kid. But there was this level of excitement and nervousness and joy that came over me.”

Working together again was hardly the most thrilling part of their year, though. Ramos proposed on Christmas Eve, and the pair confirmed their engagement after the new year. “My beloved Anthony, on Christmas Eve you got down on one knee and proposed to me in front of my favorite castle in Arundel that I used to visit all the time as a child,” Cephas Jones wrote on Instagram before explaining how special the proposal was.

In February 2019, the newly engaged couple celebrated four years together. “Home. I love you so much. Best 4 Yearz a my life,” Ramos wrote alongside a slideshow of romantic photos with his new fiancée. Cephas Jones echoed that sentiment on her own Instagram and shared a throwback photo from their Hamilton days.

Beyond celebrating their anniversary, 2019 was a big year for Ramos’ music career. Cephas Jones starred in his music video for the song “Mind Over Matter,” and his album came out later that year. “What’s wild is this billboard is on the same block of the show where we first met almost 5 years ago!!” Jasmine captioned a couple’s selfie. “Full circle!!! Man oh man, you deserve it all and more. What an incredible moment in time for you my love.”

Later that year, Ramos gave Vogue some insight into what their supposed wedding day would look like. “Jasmine and I both love music, so the DJ’s gotta be on point,” he told the magazine. “I want people sweating, suit jackets off, chancletas on.”

2020: Living Through A Pandemic

Much like it was for everyone else, 2020 was kind of a buzzkill for the couple given the ongoing coronavirus pandemic. They started the year off at the Oscars, but soon enough, they were in quarantine just like the rest of us. On social media, the duo documented all the extra time they got to spend together gardening and attending Black Lives Matter marches. And prior to their split, it seemed like all of that quality time only brought them closer. “I could write a whole speech, but when somethin is perfect you don’t need a lot a words,” Ramos wrote in a birthday post for Cephas Jones in July. “You. This. You are like the finest wine and your buzz is why you will always be at the TOP of the shelf. We love you Jas. Happy Birthday.”

2021: Celebrating In The Heights

In The Heights came out on June 11, and no one was more proud of Ramos than his fiancée at the time. “Can’t even describe how proud I am of you,” Cephas Jones wrote next to an Instagram photo of Ramos in an animal print suit and herself in a white gown. “You continue to shock the world with your enormous talent and big kind heart. You deserve it all and more. Happy in the heights day!!!”

The white gown moment for Cephas Jones didn’t come to pass, though, as just a few months later, on Nov. 30, E! News reported that the couple officially split after a three-year engagement. People also reported a source informed the outlet of the actors’ breakup but did not give a reason why they called off the engagement. As of publication, neither has released a statement online nor via reps.

More like this
The 'Love, Lizzo' Harry Styles Scene Is Just 1 Moment That Made Fans Feel Seen
By Brad Witter
Jodie Turner-Smith & Joshua Jackson's Relationship Timeline Includes Her Proposing
By Jake Viswanath
Kim K Is Putting Kanye’s Memorabilia — Like Grammys & Clothes — In A Vault
By Jake Viswanath
Khloé Kardashian’s Son Was Born A Week Before Anyone Realized
By Jake Viswanath
Get Even More From Bustle — Sign Up For The Newsletter

This article was originally published on June 18, 2021