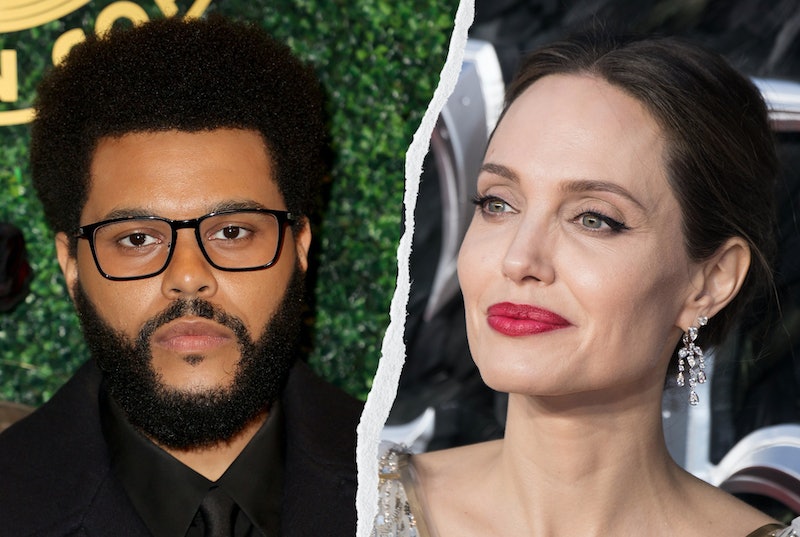 Between the return of ‘Bennifer’ and Channing Tatum and Zoe Kravitz’s regular romantic outings, there have been more than a few shock celeb couplings (or re-couplings) of late. And yet, dating rumours surrounding Oscar-winning film star Angelina Jolie and Canadian singer The Weeknd are pretty unexpected, even by 2021’s standards. The unlikely duo have been papped together on a few occasions — but are Angelina Jolie and The Weeknd dating?

While neither Angelina Jolie nor The Weeknd (whose off-stage name is Abel Tesfaye) has confirmed anything about their relationship, they appear to have been spending a lot of time together lately. The pair were spotted leaving celeb hotspot restaurant Giorgio Baldi in Santa Monica last month. Both were wearing incognito black outfits and the Daily Mail reports that Jolie left in the back seat of The Weeknd’s waiting SUV and “drove to his $70M Bel-Air mansion.”

It’s not the first time the pair have been sighted together. Various reports say Jolie and The Weeknd dined at the same restaurant on June 30. They were also papped at a private concert in Los Angeles in July but mum-of-six Jolie appeared to be at the event with her teen children Shiloh and Zahara, whereas The Weeknd partied with music producer Metro Boomin.

Given all of their recent spottings, it should come as no surprise that Jolie was asked about the “Blinding Lights” crooner in an October segment of E! News’ “Daily Pop.” “Angelina, your kids are at the age where they have opinions, so I have to know: Were they more excited that you were in the Eternals or that you are friends with The Weeknd?” the host asked. Jolie expertly dodged the question. “They’re very excited about this film, if that’s what you’re asking,” she said. “They’re very excited about this film.”

The Weeknd previously dated Selena Gomez in 2017 and had an on-and-off-again relationship with supermodel Bella Hadid, which ended in 2019. The Earned It singer has never been married and, as Complex notes, he name-checks Jolie in his single Party Monster.

Meanwhile, Jolie is still in the midst of a custody battle with ex-husband Brad Pitt. Jolie filed for divorce in 2016 and, back in May 2021, Pitt was awarded tentative joint custody of Pax, 17, Zahara, 16, Shiloh, 15, and 12-year-old twins Vivienne and Knox.

Bustle has reached out to reps for both Jolie and The Weeknd and will update this article if any information becomes available.

More like this
Rita Ora Finally Opened Up About Marrying Taika Waititi & Their "Perfect" Wedding
By Sophie McEvoy and Catharina Cheung
Vanessa Bauer Is Reportedly Dating Her 'Dancing On Ice' Partner
By Darshita Goyal
'Love Island' Has Added Yet Another Bombshell To The Villa
By Bustle UK
4 Surprising Celeb Throuples That Got The Internet Talking
By Sophie McEvoy
Get The Very Best Of Bustle/UK
Sign up for Bustle UK's twice-weekly newsletter, featuring the latest must-watch TV, moving personal stories, and expert advice on the hottest viral buys.