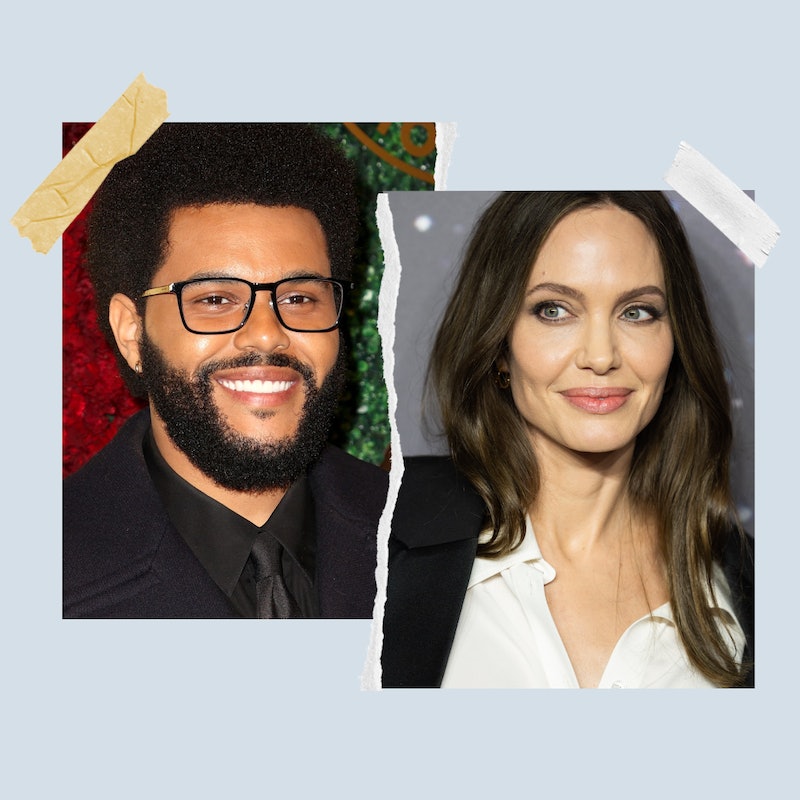 Three-time Grammy winner The Weeknd just released Dawn FM on Jan. 7, and listeners of his fifth studio album are already playing detective, trying to glean clues off of its 16 tracks, to figure out his relationship status. It’s a worthwhile attempt, especially since The Weeknd is known for being private and keeping his love life away from the spotlight. Fans are homing in on one song in particular. “Here We Go ... Again” seems to stoke the flames of recent rumors about The Weeknd dating film star Angelina Jolie. Inquiring minds want to know: Are they a powerhouse couple?

“My new girl, she a movie star,” The Weeknd sings on the album’s eighth track, “Here We Go... Again,” featuring Tyler, the Creator. The 31-year-old singer then divulges more intimate details, belting, “I loved her right — make her scream like Neve Campbell.” If he is talking about Jolie, it wouldn’t be the first time the singer alluded to the Maleficent star in song. Complex noted that a line in his 2016 single “Party Monster” goes, “Angelina, lips like Angelina.”

READ NEXT: Best Memes & Tweets About The Weeknd’s New Album

The Weekend and the Eternals star initially sparked dating rumors when they were spotted dining together in Los Angeles on Jun. 30, and again when they reportedly attended the same private concert in July. They were even sighted returning to the same L.A. restaurant in September, both wearing matching head-to-toe black. On Oct. 25, when asked about being “friends” with The Weeknd in an interview with E! News, Jolie expertly evaded the question. Around that time, Jolie was in a custody battle with ex-husband Brad Pitt.

This isn’t the first time the “Earned It” singer fueled the rumor mill with his lyrics — or music videos — either. When The Weeknd headlined the 2021 Super Bowl halftime show, he performed songs off his album After Hours. Released in March 2020, many people speculated The Weekend’s ex, Bella Hadid, inspired several heartsick tracks. After all, the couple dated on-and-off from 2015 to 2019, when they reportedly called it quits. He was also briefly linked to singer Rosalía in December 2020 after the pair starred in a steamy music video for his “Blinding Lights” remix. But since proximity does not a relationship make, those rumors quickly died down.

The Weeknd’s longest public relationship to date was with Hadid. Us Weekly confirmed the couple's romance in May 2015, reporting that they had gone on double dates with her sister, Gigi, and her then-boyfriend Cody Simpson. That same year, Hadid even made a cameo in The Weeknd's music video for “In the Night.” Their high-profile romance would later endure a series of splits and reconciliations.

After a brief break over the holidays in 2015, Hadid and The Weeknd got back together. But by November 2016, the pair separated once again, according to People, but remained friends for a short time. However, that goodwill eventually ruptured when The Weeknd began dating Selena Gomez at the start of 2017. Hadid unfollowed Gomez on Instagram, and she followed suit a few months later. The Weeknd and Gomez went red carpet official at the Met Gala — an event he had attended with Hadid a year earlier. In a September interview with InStyle, Gomez said, “You want someone to add to your life, not to complete you, if that makes sense.” Speaking directly about The Weeknd, Gomez added, “I'm lucky because he’s more of a best friend than anything else.” They called it quits in October after 10 months of dating, People reported. “It’s been hard for them to come to the realization that this is the direction things were heading, but it’s been hard for months,” a source told the outlet.

More than six months later, insiders told E! The Weeknd and Hadid were “exclusively dating” once more. “Abel realized once he started dating around that he actually is still in love with Bella, and they reconnected,” a source said at the time. They split again in August 2019, according to E!.

Alas, that divide reportedly inspired The Weeknd's album After Hours, including the tracks “Heartless” and “Save Your Tears.” He hasn’t confirmed whether the songs are about Hadid, nor has he clarified his relationship status.

The Weeknd stays purposely mum about which exes are referenced in his music. “It’s easier to talk about songs that are just about me; I don’t like to talk about what I’m going through with other people,” he told Variety.

More like this
Linda Ronstadt’s “Long Long Time” Plays A Pivotal Role In The Last Of Us
By Brad Witter
Michael B. Jordan Tackled His "Public Breakup" With Lori Harvey On 'SNL'
By Brad Witter
Joey Essex Is Rumoured To Be Dating A 'Love Island' Favourite
By Sam Ramsden
Who Is Pete Davidson Dating? He & Chase Sui Wonders Got Caught Kissing
By Jake Viswanath
Get Even More From Bustle — Sign Up For The Newsletter
From hair trends to relationship advice, our daily newsletter has everything you need to sound like a person who’s on TikTok, even if you aren’t.