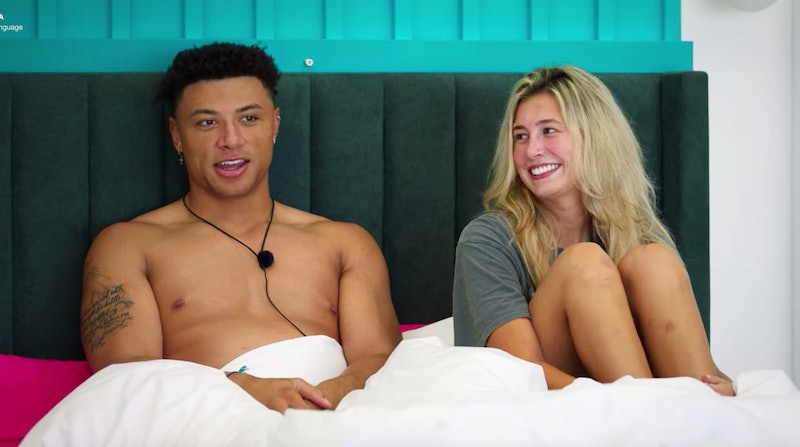 Spoilers ahead for the Too Hot to Handle Season 2 finale. Toronto-based model Carly Lawrence was initially hesitant to give Chase DeMoor a chance after learning he was a football player, but it didn’t take long for her to be charmed by the pro athlete. Despite the fact that their first kiss got off to a very bumpy start, the two began forming a strong connection. Then robotic cone Lana popped up to share some important info: They weren’t on a new dating show, but Netflix’s Too Hot to Handle, where any kissing, physical intimacy, or self-gratification leads to the deduction of money from their prospective $100,000 prize.

Unlike some of her fellow villa residents, Carly wasn’t familiar with the premise of the show, so Lana’s appearance didn’t shock her nearly as much as it did Chase. “I hadn’t watched it before so I didn’t really know what was going on. In my head I was just like, ‘Well, this doesn’t really change anything for me,’ so I still continued to do what I wanted to do,” Carly tells Bustle. “Plus I’m bad with following rules anyway.”

Her burgeoning romance with Chase hit a snag after she tipsily kissed fellow contestant Peter Vigilante on the second night in the villa (Hey, she said she was bad with following rules!). Now reflecting back on it, Carly says that she regrets the impulsive decision. “Like that’s not me, it’s not in my character to make Chase feel crappy about himself,” she says. “I wouldn’t do that again.”

During Carly’s conversation with Chase about the kiss the next day, she made it clear that he’s the only person in the house she’s truly interested in, but he was very obviously reluctant to trust her again. Their relationship was tested further when Carly went on a date with Robert, a new addition to the villa. However, the date only solidified her feelings for Chase, and the two seemed to emerge stronger and more confident about their growing connection — until the pair began to realize they might not be right for each other, leading to Chase somewhat abruptly ending their relationship.

Carly was clearly upset when Chase rebounded with new arrival Tabitha not even 24 hours later, but she quickly found comfort with Joey, another latecomer to the show. Still, Lana was determined to make her and Chase confront and resolve their issues. In a workshop, the pair was encouraged to confront each other about their feelings, and it got very intense. “[It] wasn’t even like I was just talking to Chase, it was like any boyfriend I’ve ever dated who’s screwed me over was sitting in front of me, and I was just like going at him, as if I was talking to all my ex-boyfriends,” Carly says. It didn’t push her and Chase back together, but it did dissolve the tension between them.

Carly ended the show dating Joey, who she’s no longer with but still talks to “all the time.” She’s also friendly with Chase, and the two even spent New Year’s together. One thing viewers didn’t see on the show? She had a flirtation with Natha, though not many of their interactions were on camera. Ultimately, Carly says being on the series helped her realize what she needs to work on in her relationships, but she’s not in a rush to jump into one now — and with so many options, who can blame her?

More like this
Wataru & Midori From 'Love Is Blind: Japan' Are Having A Baby
By Kadin Burnett
Here’s Everything Coming To & Leaving Netflix In December
By Jake Viswanath
Cole Says He's In Therapy After 'Love Is Blind' & It's Been "Liberating"
By Grace Wehniainen
At 28, Prue Leith Was In A Secret Affair & Sharing Apple Pie With Stoned Neighbors
By Grace Wehniainen
Get Even More From Bustle — Sign Up For The Newsletter