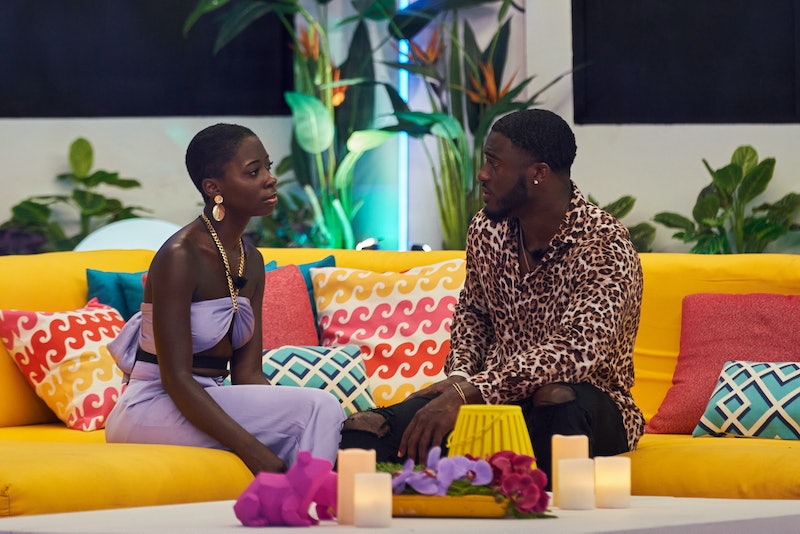 After Love Island USA Season 3, contestants Cashay Proudfoot and Melvin “Cinco” Holland moved on from their onscreen love triangle. The two decided to couple up early in the season, which CBS aired from July to August 2021, but then he left her for Trina Njoroge. Cash confessed her lingering feelings for him, causing Cinco to rethink his decision and tell Trina he wanted to continue going after Cash. But she moved on and decided to pursue Charlie Lynch, leaving Cinco alone to exit the island on day 25. Charlie didn’t love how upset she was to see Cinco leave and felt their relationship never progressed past talking about her connection to Cinco, so he instead chose Alana Paolucci and sent Cash home during the Aug. 6 episode. Once they were both out of the competition, naturally, fans began wondering if Cash and Cinco were dating again.

Viewers became curious during a virtual reunion in August 2021 when Cinco urged Cash to come to New York so he could catch a train from D.C. and meet her. “I actually have a two-hour layover in D.C.,” she said before informing Cinco that she spent her final three days on the island thinking about him. “All the girls were like, ‘Girl, go get Cinco,’” she continued. “That’s what it came to. It’s always been you.”

Cinco, for his part, replied, “I’m excited to hang with you again. Obviously, we got some conversations we have to have,” before adding that he was “looking forward to it.”

The August 8, 2021 reunion was seemingly pre-recorded, as Cash posted an Instagram video of her and Cinco at an airport the same day. “I’m on my way back to my hometown, and guess who I ran into?” she said in an IG story, per Us Weekly. “We finally saw each other… Thank you guys so much for all the support and all the messages. We’re figuring it out, but no pressure, please. We’re just chilling,’ and we’re gonna see what happens.”

Their time together didn’t end at the airport, however, as they continued posting Instagram stories from what appears to be Cinco’s home, where they’ve been enjoying his father’s cooking, a FaceTime from fellow Islander Javonny Vega, and even time alone — kissing — in a bedroom.

Shortly afterward, it seems they did figure it out and officially got back together, even spending the holidays together. In late January 2022, however, Cash and Cinco announced their breakup on social media. “I can’t begin to thank all the supporters for riding with us so hard during and after the show,” Cash wrote in an Instagram story, per Screen Rant. “Please don’t DM me that you’re sad bc obviously same. [Breakups] are hard.”

In his simultaneous post, Cinco, for his part, asked his IG followers to respect both their privacy and decision to split. “Relationships are hard and breakups are hard also,” he posted, adding that they hoped fans would continue to support them separately.

Later, when Cash and Cinco reunited to compete on CBS’ The Challenge: USA, premiering on July 6, they apparently were not on speaking terms at first. One preview scene shows the exes eventually having a conversation, with Cinco — who called Cash a “threat” to his game — wanting to discuss why the so-called “Love Island alliance” didn’t trust him and how to amicably navigate being teammates, post-breakup. “It’s crazy to have the world and everybody else in this house watching a very public breakup,” Cash shared in one The Challenge: USA interview scene.

Though it seems they eventually were able to get along fine, Cash also vented to her cast mates that Cinco was still showing the same behavior that led to their breakup in the first place. So while it seems they’re at least on friendly terms, the chances of another reconciliation seem slim. Stranger things have happened on reality TV though.

More like this
Molly-Mae Hague & Tommy Fury Celebrate Pregnancy Reveal In The Sweetest Way
By Sophie McEvoy and Sam Ramsden
What Exactly Is The Bish & Chips Show?
By Frances Stewart
You Can “Fall In Love” At The Resort Where Bachelor In Paradise Season 8 Was Filmed
By Brad Witter
The 'Bachelor In Paradise' Schedule Shifts To 4 Hours Every Week After The Season 8 Premiere
By Brad Witter
Get Even More From Bustle — Sign Up For The Newsletter