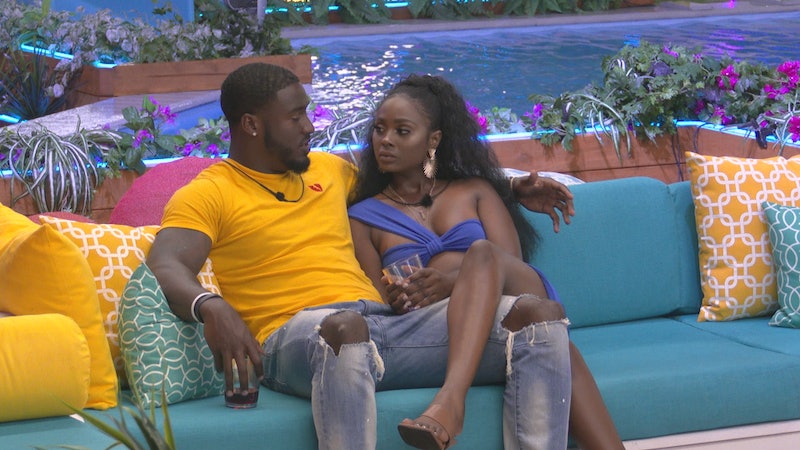 Season 3 of Love Island US premiered on CBS earlier this month, and the competition is already hotter than ever — especially between contestants Cinco Holland, Trina Njoroge, and Cashay Proudfoot. After Trina and Jeremy Hershberg experienced a falling out, she and her friend Cashay both took an interest in Cinco, vowing to let fate take its course and avoid petty competition. But with Cashay’s commitment issues and inability to open up in conversation, she began to fear that Cinco would choose Trina over her — which he did at the end of Week 2. Midway through Week 3, however, Cinco is once again struggling to choose between the two women. In a clip from the July 23 episode of Love Island US shared exclusively with Bustle, Cinco and Trina sit down for an intense conversation about the love triangle.

The clip opens with Cinco confessing his feelings for Cashay to a few of his fellow contestants, noting that recent conversations with her caused him to think about what could’ve been between the two of them. After a Battle of the Sexes game challenge featuring archery and fencing, viewers see Cashay discussing her romantic feelings for Cinco and wondering if he shares them as well. Then, Trina sits down with Cinco and confronts him with suspicions about his feelings for her, to which he replies with a confession of his feelings for Cashay. Finally, Trina breaks down in tears during a confessional interview. “I don’t want to be with a man that thinks about another girl,” she says, “and I also am friends with this girl. This is just too much.” Watch the exclusive clip below.