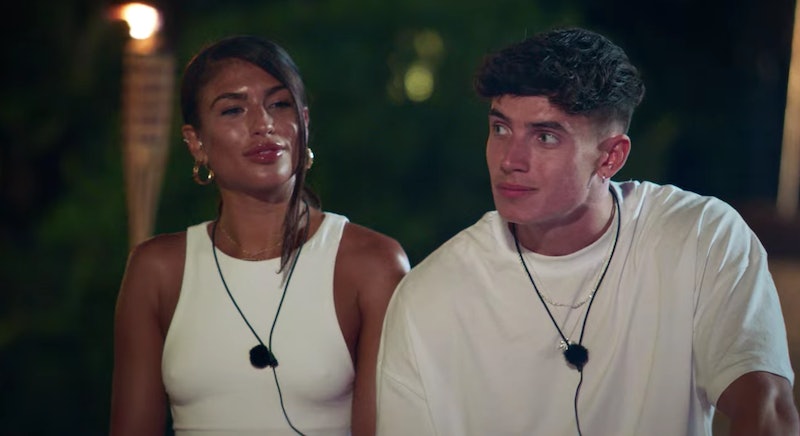 Spoilers ahead for the Too Hot to Handle Season 2 finale. One of the first couples to emerge — and first to break the rules — on Too Hot to Handle Season 2 was Cam Holmes, 24, and Emily Miller, 26. The two contestants started stealing glances at each other the moment they arrived in the villa, and it wasn’t long before they shared a kiss. But then sex-policing virtual assistant Lana brought down the hammer, revealing that they were on Too Hot to Handle and couldn’t kiss or have sex of any kind lest they wanted money deducted from their collective $100,000 prize.

For Cam, the revelation came as a shock. “I didn’t really process it as, ‘Oh my gosh this is Too Hot To Handle, this is such an amazing show.’ I processed it as, ‘Oh my god this is a sex ban, I don’t know if I can do this,’” Cam tells Bustle. “Everyone was like, ‘What an amazing show!’ and I was like, ‘Yeah, but do you know the rules? Are you listening to the robot?’”

Neither Lana’s rules nor their shrinking prize pot stopped him and Emily from stealing another kiss...and then another...and another...and that was only in the first four episodes! When Lana introduced two new singles, Cam was tempted to jump ship with Christina Carmela. But he eventually realized that he wanted to give things with Emily a genuine shot, and as he invested more in the process of the show, their relationship deepened.

“The turning point was probably midway for me, where I just thought ‘I’m going to fully engage into this, and literally just treat it like I’m in therapy,’” Cam says. “You’re there for a reason at the end of the day. We were all there cause we had commitment issues, trust issues, so I just realized, ‘Ok, I probably do have these issues,’ and I had a reason to get over them — I had Em there. So I was like, ‘Well, I need to get over them here, or I’m probably never going to get over them.’”

Though Cam spent the next few episodes grappling with his fear of commitment and pessimism about relationships (as well as narrowly avoiding more temptation from Christina), he eventually opened up about those anxieties and the reasons behind them to Emily. By the end of the retreat, he asked her to be his girlfriend and told her he was falling in love with her — almost a 360 from the commitment-fearing Welsh boy who entered the villa just a few weeks prior.

Months after the end of the show, the two are still going strong and have actually been living together during the pandemic. “We’ve done everything in reverse order — we’ve been together like 24/7, and then learning how to text each other, and then actually figuring out what we both like,” Emily says. “It’s been very backwards, but I wouldn’t have changed it for the world.”

They wouldn’t take back any of their rule breaks, either. “I’d probably break more,” Emily says.