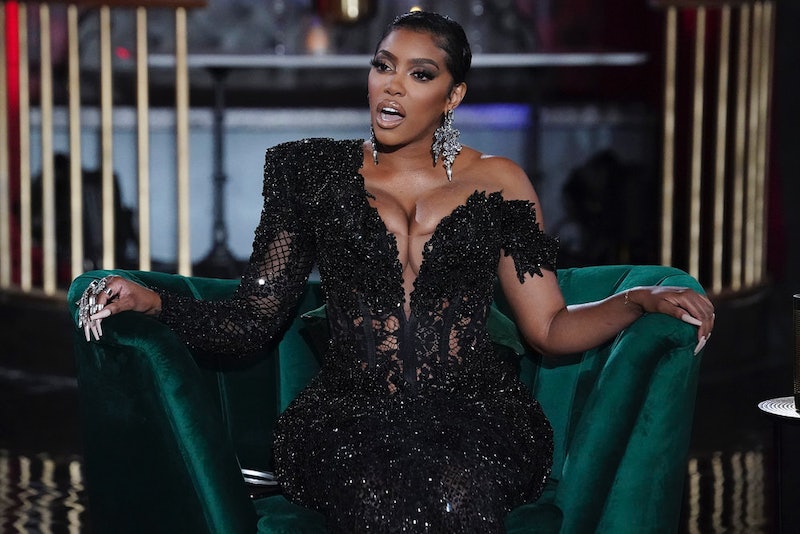 When Falynn Guobadia first appeared in the third episode of The Real Housewives of Atlanta Season 13, the onscreen chyron described her as Porsha Williams’ friend. When Porsha announced her shocking engagement to Falynn’s estranged husband Simon in a May 10 Instagram post, however, she claimed the exact opposite, writing, “Falynn and I are not friends, and Simon’s divorce has been settled.” (Falynn later wrote in a post of her own that the divorce has not yet been finalized, a fact People confirmed via court documents.)

The whole situation was perplexing, to say the least, but it seems Porsha and Falynn were never close to begin with. Before taking sister Lauren Williams and friend Tanya Sam to an intimate pool party at Falynn’s home, Porsha vaguely explained they met because Simon owns a restaurant across the street from an Atlanta hookah lounge they enjoy going to. “His wife is just really nice, and we exchanged numbers one day, and she was like, ‘You should come over,’” she said.

Meanwhile, Falynn had a similar story when RHOA star Kandi Burruss asked about her connection to Porsha during a March episode of her Speak On It web series. As Falynn told it, they met via Simon’s casual friendship with Porsha’s on-and-off ex Dennis McKinley, who’s also the father of her 2-year-old daughter, Pilar Jhena (aka PJ). Explaining that Simon and Dennis are both in the nightlife and hospitality industry, Falynn said, “At some point in time, Porsha and I got to meet, and she was really sweet. She’s always been very real and genuine, so we clicked.”

In the same interview with Kandi, Falynn revealed that she’d been approached by producers multiple times to join RHOA but had always declined. Although the Bravo reality series introduced her in Episode 3, she explained that she wasn’t brought on for Season 13 until about a month into filming late last summer. So it seems that Falynn and Porsha’s so-called friendship was more of a producer setup for her to jump into the series, rather than an organic relationship.

TMZ reported as much via multiple sources on May 11, claiming that the women met for the first time the day they filmed together and producers had instructed them to pretend they’d known each other. What’s more, the outlet also reported that Dennis and Simon were never friends, either. Still, Porsha celebrated Mother’s Day with Simon and Dennis this year, and even shared Instagram photos of the three of them on May 9.

“Simon and Dennis are committed to being respectful and supportive of my happiness in this situation, as well as being the best co-parents they can be to baby PJ,” Porsha wrote, in part, when announcing her and Simon’s relationship, which she claimed began about a month ago. “Two black men stepping up and being amazing people-let’s praise them!!!!”

Although the varying timelines of Porsha and Simon’s relationship still don’t quite align, the couple did officially announce their divorce on April 22. (According to People, Simon filed for divorce in January but dismissed his motion a week later; he then filed for divorce a second time in late February.) Meanwhile, Falynn downplayed their “marital issues” in a March 31 interview with The Jasmine Brand.

Porsha and Simon’s engagement might have been foreshadowed in RHOA, though. After Porsha complimented the backyard setup he and Falynn laid out for her, Lauren, and Tanya, Simon replied, “Now that makes me want to get married all over again.” Although Falynn thought that meant a vow renewal and “ring upgrade” were in the cards, what nobody guessed is that less than a year later, the (very similar) engagement ring would actually be on Porsha’s finger.