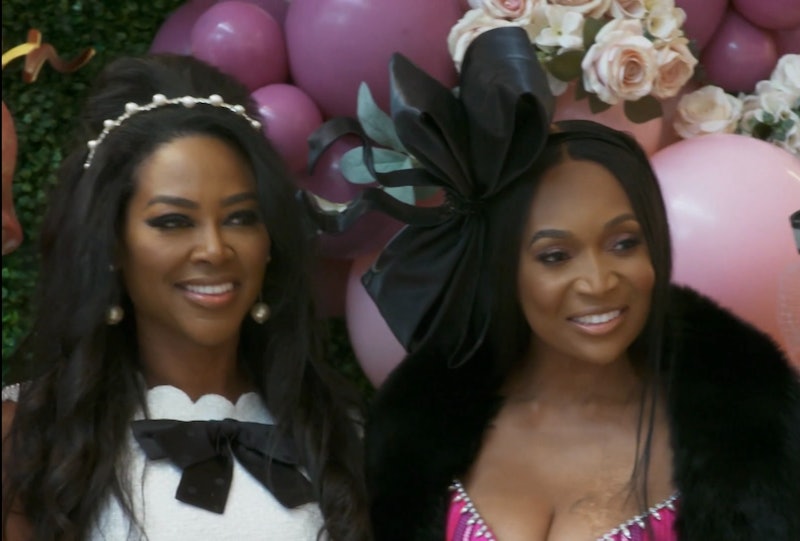 From crashing a wig launch event with a marching band to their back-and-forth shade on The Real Housewives of Atlanta, Kenya Moore’s friendship with Marlo Hampton has had its ups and downs. For Season 14, Bravo finally gave longtime “friend of” Marlo her peach as a full-time Housewife, and despite some early drama, she and Kenya were surprisingly working on a friendship. Their efforts were short-lived though: After Marlo spread rumors that Kenya pretended to be too sick to support co-star Shereé Whitfield in the aftermath of Tyrone standing her up, things quickly started to unravel.

“Marlo is working overtime to make people think I’m a liar, I’m not a good friend,” Kenya told Shereé in the June 19 episode. Noting that they “just started back being friends,” the former Miss USA had already had enough, adding, “It’s just a very sick, very toxic cycle, and I’m just not willing to be a part of it anymore.”

At a group outing later in the episode, Kenya told Marlo as much, taking her frenemy to task for “talking sh*t” behind her back. “What you need to do is stop trying to vilify me and try to turn people against me,” Kenya said. “That’s not being a friend. ... What you are is someone who pretends to be somebody’s friend, and you’re not.”

Away from the group, the Le’Archive founder also threw shade at Kenya’s dating history, telling Shereé that she “went through every rapper in America and didn’t get a ring” and “slept with half of Hollywood.” It seems things will only get worse this season, too. The June 26 episode’s promo teases an altercation between Marlo and Kenya at a “Drop It with Drew” group workout that looked on the verge of turning physical.

“It’s gutter behavior, which declasses the show. A lot of the antics she uses ... she thinks she’s making good TV, it’s just making her look like the devil she is,” Kenya said of Marlo in a Today interview in June, calling her co-star’s comments to Shereé “unprovoked.” Adding that she feels their friendship is “too far gone” now to recover, the Kenya Moore Hair Care founder theorized that Marlo was simply stirring up drama to “keep this [full-time] position” in “an exclusive club that had never let her in before.”

The fact that Kenya and Marlo are not friends anymore had been hinted at before RHOA Season 14 even premiered. For starters, the women unfollowed each other on social media last December, but they’ve made some progress since then. “I can love her, we’re cordial," Marlo told Entertainment Tonight in late April. “We’re cordial. We’re on group texts with each other. We’ve unblocked each other. So that’s good. But that’s a good thing. And we’re just going to stay there.”

It seems the ceasefire didn’t last long. In May, The Wendy Williams Show guest host Michael Rapaport brought up to Kenya that Marlo said she was “jealous” she’d been promoted on RHOA. Kenya clapped back, “Jealous? That’s really silly. I’m an icon. She’s an ex-con.”

For her part, Marlo, whose criminal history has already been discussed on the show, responded on Instagram by posting several of her mugshots and celebrating how far she’s come since those days. “A round of applause to all the ex cons who’ve turned their life around,” she wrote in the May 19 post, adding an “iconic ex-con” hashtag that she’s used multiple times since then.

Given Kenya’s assertion on Watch What Happens Live’s June 19 after-show that Marlo is “not capable of being a friend” — coupled with some shady retweets — RHOA viewers shouldn’t expect a reconciliation this season either. Although, with the reunion yet to be filmed, there’s always hope.