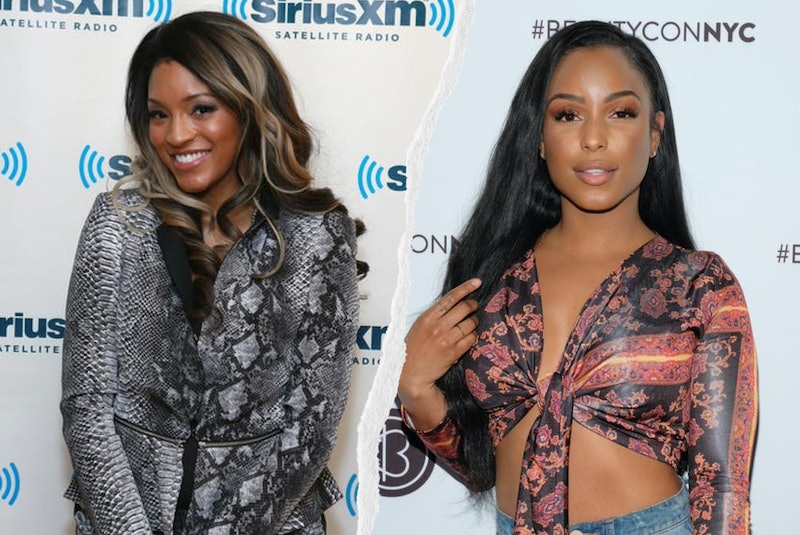 After feuding all season, Real Housewives of Atlanta stars Drew Sidora and LaToya Ali’s differences nearly sparked a physical brawl during the April 19 episode of the hit Bravo reality series. At Cynthia Bailey's white elephant holiday party, Sidora again accused Ali of cheating on her estranged husband (from whom she filed for divorce in June) with Prophet Anthony Lott, a claim both parties have denied. In response, Ali picked up a wig Sidora bought as a party gift and threw it at the Step Up actress, causing a fight that had to be broken up by production staff. During Part 1 of the Season 13 reunion, which aired on April 25, the two got into a verbal spat, but the question remains if the two have settled their differences since filming it.

At the reunion, Ali claimed one of Sidora’s friends came into her dressing room and began harassing her, trying to give her a Vitamin C pill after she posted on social media that she wasn’t feeling well. Sidora apologized and said she wasn’t involved in the incident, though Ali didn’t believe her and proceeded to verbally attack her. In a new interview with Access Hollywood, Ali’s fellow RHOA cast member and friend Kandi Burruss opened up about the feud and how it plays out at the reunion.

“They’re not friends, so LaToya was pissed. She’s like, ‘Why do you have people coming in my dressing room trying to be funny, trying to put cameras on me?’” said Burruss. “It was a whole mess, and so she came out to the set on fire... I don’t want to give you too much. You’re just going to have to tune in.”

“So is it safe to say that LaToya and Drew do not bury the hatchet?” asked hosts Lauren Herbert and Emily Orozco. “I would say that would be a safe assumption,” replied Burruss.

Noting that she knew Ali before she came onto the show, Burruss said she was the one who introduced her to the RHOA crew. “She has no filter whatsoever, like none, but honestly, before inviting her to be amongst the group, I didn’t realize how much of a ‘no filter’ she had,” Burruss said. “It was like, ‘Oh okay. Well, she is really letting these people have it. She is not holding back.’”

During Part 3 of the reunion, however, Sidora and Ali’s relationship took an unexpected turn. Of course, the two got into another argument about Prophet Lott, with Sidora claiming that she had trouble finding a prophet to bless her son due to Ali’s relationship with Lott — though the rest of the ladies didn’t fully believe her story. Then, Sidora apologized for bringing the wig to the Christmas party as a gag gift. In a surprise to viewers, the reunion ended with Ali telling Sidora she’s open to rebuilding their relationship and working to be friends in the future. Perhaps even more shocking is that Sidora seemingly agreed to the proposal, so fans might see the pair on good terms next season — depending on how long the friendship lasts.

More like this
'RHOSLC’s Heather & Whitney Are Still On A “Friendship Break” After Season 3 Reunion
By Jake Viswanath
Andy Cohen Apologized To Larsa Pippen After A 'RHOM' Season 5 Reunion Dust-Up
By Brad Witter
RHOP’s Robyn Dixon Explained Why Juan Paid For Another Woman's Hotel Room
By Brad Witter
Everything To Know About 'The Real Housewives Ultimate Girls Trip' Season 4
By Jake Viswanath
Get Even More From Bustle — Sign Up For The Newsletter
From hair trends to relationship advice, our daily newsletter has everything you need to sound like a person who’s on TikTok, even if you aren’t.