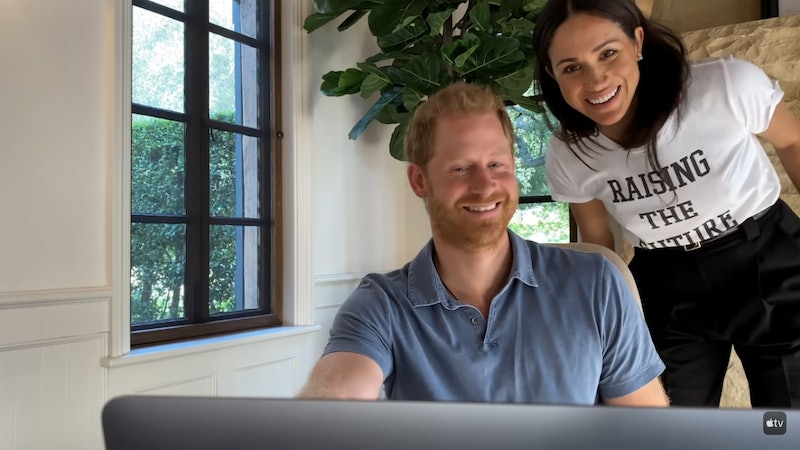 In Prince Harry and Oprah Winfrey’s mental health docuseries, The Me You Can’t See, the famous pair frankly discusses their respective journeys with mental health — their own openness catalyzing conversations with others, too, including Lady Gaga and Spurs player DeMar DeRozan. The Apple TV+ series, which premiered May 21, isn’t the first time Harry and Winfrey have talked candidly about mental health, of course. In March, the revered TV host sat down with Harry and his wife, Meghan Markle, who spoke about their experience with suicidal thoughts and the impacts of “the institution” and media scrutiny.

When Meghan appeared in the trailer for the docuseries, it naturally led to viewers wondering whether or not the duchess would play a large role on-screen. Now that all episodes of The Me You Can’t See have been released on Apple TV+, it is clear that Meghan’s cameo in the trailer is essentially her only appearance in the show, aside from archival footage and an adorable video with baby Archie. During one of Harry’s video chats with a therapist (a practice he says has “equipped me to take on anything”), Meghan pops in to say “hi” — donning that iconic “Raising the Future” t-shirt.

Meghan’s limited screentime isn’t necessarily a surprise, but the context of Meghan’s short appearance does tie into the series’ overall theme of mental health. In fact, Harry thanked the duchess for encouraging him to go to therapy once they began a relationship with each other. Ultimately, it was a fight in which Harry “reverted back” to his 12-year-old self that prompted Meghan to raise the issue.

“That’s why I’m here now,” he said. “That’s why my wife is here now. Without therapy, and without doing the work, we would not be able to withstand this.”

Harry described his late 20s and early 30s — before meeting Meghan — as a “nightmare time in my life” defined by frequent panic attacks, anxiety, burnout, and self-medicating. “Towards my late 20s, I was starting to ask questions of, should I really be here?” he said. “And that was when I suddenly [realized], I can’t keep hiding from this. Family members have said, ‘just play the game and your life will be easier.’ But I’ve got a hell of a lot of my mum in me.”

During the docuseries, Harry said that he knew his relationship with Meghan wouldn’t last if he “didn’t do the therapy and fix myself,” but he acknowledged that asking for that help wasn’t always easy. “I was ashamed to go to my family,” he said.” Because to be honest with you, like a lot of other people my age could probably relate to, I know that I’m not gonna get from my family what I need.”

More like this
I Read Prince Harry's 'Spare' So You Don’t Have To: 11 Highlights To Know
By Marina Watts
Prince Harry Incorrectly Recites Christina Aguilera’s “Genie In A Bottle” Lyrics
By Jake Viswanath
Meghan & Harry Respond To Jeremy Clarkson’s "Apology" Over *That* Column
By Sophie McEvoy
Andy Cohen Apologized To Larsa Pippen After A 'RHOM' Season 5 Reunion Dust-Up
By Brad Witter
Get Even More From Bustle — Sign Up For The Newsletter
From hair trends to relationship advice, our daily newsletter has everything you need to sound like a person who’s on TikTok, even if you aren’t.