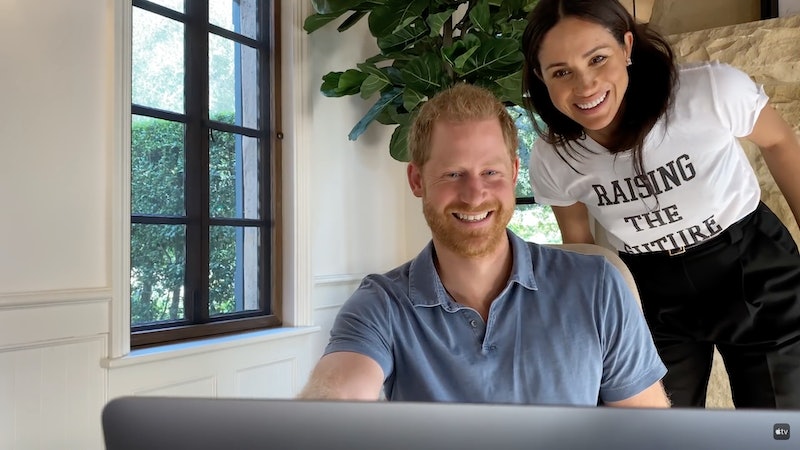 Meghan Markle isn’t a stranger to wearing items of clothing with significant messaging, or brands that support some of the many causes she endorses. The Duchess has always been acutely aware that what she wears in the public eye can create a narrative and has honed harnessing that narrative over her time in the spotlight, from the bracelet gifted to Meghan by Gloria Steinem herself, to wearing all white at significant events to champion women’s rights. The latest item? A black-and-white statement T-shirt, bearing the slogan “Raising The Future”. As with most things the royal family wears, don’t expect it to stick around for long. Here’s where to buy Meghan’s “Raising The Future” T-shirt, before it gets snapped up.

During a surprise appearance in the official trailer for Prince Harry and Oprah Winfrey’s new Apple TV+ series, The Me You Can’t See, Meghan made a brief cameo behind Prince Harry as he appears to be on a Zoom call with some of the shows guests, which will include celebrities such as Lady Gaga, Glenn Close, and DeMar DeRozan.

In the clip, the Duchess can be seen wearing a white slogan T-shirt that reads “Raising the Future” in black, tucked into a pair of high-waisted black tailored trousers, in Meghan’s effortlessly smart style. The statement top is a sweet nod to her son Archie, who just celebrated his second birthday, and her future daughter, due in early June.

The top in question is by UK-based independent fashion brand Mère Soeur, which translates as “Mother Sister”, founded by designer Carrie Anne Roberts. After spotting Meghan wearing her T-shirt, the designer took to Instagram to express her joy, writing: “If you know how my brand started and why then you’ll understand why I shed a small happy tear just now. Endlessly grateful to be here always.” Before adding “PS. THEY’RE ONLINE NOW!”

At the time of writing, the £27 T-shirt was still available in some sizes, but due to “the Meghan effect” you might have to be quick to snap one up.

The crew neck, short-sleeved tee is one of many feminist-inspired pieces from the “mama merch” brand. “However you choose to do it, whatever your parenting choices, we're all doing it,” the product description for the T-shirt reads. “The greatest and hardest job you'll ever have.”

Made in the UK and printed on what the brand describes as “Earth Positive tees”, the “Raising the Future” T-shirts are available in sizes small to 3XL, in white, black, pink and lavender colourways, as well as a yellow sweatshirt option.

You can also pick up a babygrow which has “The Future” written across the front in the same style. Eagle-eyed royal fans might recognise it as the same Mère Soeur baby grow Meghan brought as a gift 2019 during a sit down with mothers and mentors working with the Mothers2Mothers charity in Cape Town. I don’t know about you, but I’m hoping she’s got another one at home for a matching mother-daughter picture.

More like this
Harry Styles’ Red Carpet Looks Have One Thing In Common
By El Hunt
How To Shop Your Favourite Celebrities’ Closets On Depop
By Darshita Goyal
Dr. Martens’ New Collab Reimagines A DM Classic
By Frances Stewart
The Royal Family Shared An Unseen Photo Of The Queen Doing What She Loved Most
By Sophie McEvoy
Get The Very Best Of Bustle/UK