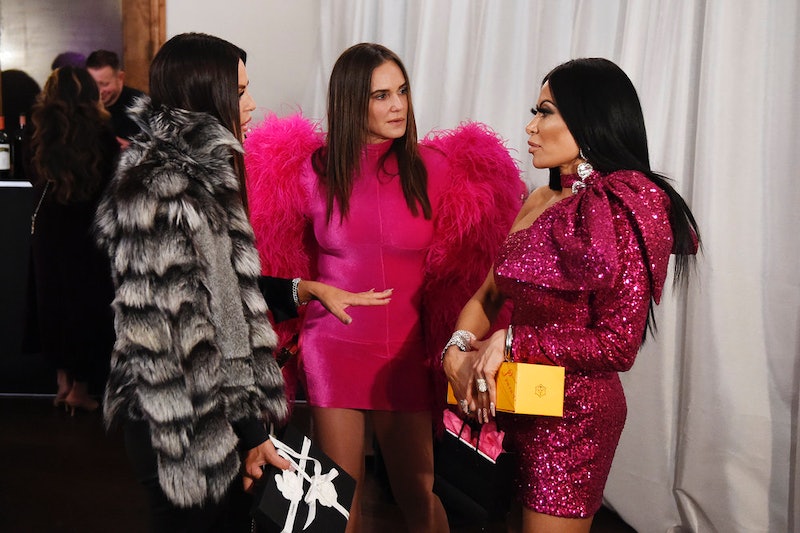 Despite beginning The Real Housewives of Salt Lake City Season 1 as friends, Meredith Marks and Jen Shah’s relationship took a turn in the middle of filming and doesn’t seem to have ever recovered. At issue? Jen spread rumors about Meredith’s marriage on the show, leading Meredith to tell Andy Cohen in January that their friendship “will never be the same.” The drama only heightened during the RHOSLC Season 1 reunion when Meredith accused Jen of bashing her son, Brooks, on social media.

After RHOSLC premiered its second season on Sept. 12, Meredith explained to her husband Seth on the show that Jen was still attacking Brooks on social media. According to their 22-year-old son, as well as screenshots provided by Meredith, Jen liked a tweet in which a fan said they “want Jen to slap Brooks and call him a sissy b*tch.” What’s more, Meredith called out what she called “homophobic commentary” for “labeling” Brooks as gay, when he “has not labeled himself as gay.” (Jen had replied, “[100 emoji] to everything you said” to a lengthy fan Instagram comment that in part referred to Brooks as a “privileged twink.”)

Jen, for her part, said she apologized to Meredith and her son multiple times, though she felt she also deserved an apology for “derogatory remarks” Brooks made about her vagina last season. “‘Derogatory remarks’ about your vagina??” Meredith wrote while live-tweeting the Sept. 19 episode, also accusing her costar of deflecting and lying. “Brooks NEVER made derogatory remarks about you or your vagina. Last time I checked, saying you saw someone’s vagina and that it made you uncomfortable is NOT derogatory.”

While appearing on Watch What Happens Live with Andy Cohen the same night, Meredith doubled down on her statement, explaining that “the whole thing came about because Jen repeatedly showed her vagina in my home after being told by two assistants to cover up,” and that Brooks “shouldn’t have felt uncomfortable saying he was uncomfortable because she kept doing it after being told [not to].”

Meredith teased to Entertainment Tonight that viewers will have to “watch and see” if Jen apologizes to Brooks on RHOSLC, but did admit that they were able to “put [the situation] to rest,” explaining that she’s “not someone who likes to dwell on stuff” and would rather move forward. “I do believe that people strive to do better,” she added. “They can do better. And ... you have to have levels of forgiveness.”

Though it appears the two’s friendship will incrementally improve throughout Season 2, fans shouldn’t expect a “full resolution,” Meredith said. “We really started at a negative 100 and I would say maybe at one point we did get to a zero, a neutral and, things regressed back again.”

Before they can even get there, though, they’ll have to address accusations that Meredith called federal authorities on Jen, who was arrested on March 30 on charges of conspiracy to commit wire fraud and conspiracy to commit money laundering. (Jen pleaded not guilty and has maintained her innocence.) In one explosive scene from the RHOSLC trailer, Whitney Rose tells Meredith it “looks like you may have had something to do with the fact that Jen was indicted,” followed by Jen yelling at her one-time friend, “I swear to God, if you had anything to do with the bullsh*t charges against me…”

Meredith previously told ET that she “absolutely [did] not” call the feds, but she gave a more coy answer when Cohen later asked the same question on WWHL. “Andy, haven’t you heard me tell everyone not to come after my family?” (Jen has largely avoided press and Twitter, likely given her legal issues, and has yet to address her current relationship with Meredith.)

Viewers will have to stay tuned to RHOSLC to get a more definitive answer, but there seems to be no love lost between the women either way.

More like this
'RHOSLC' Star Jen Shah Refuses To Do A Post-Sentencing Interview With Andy Cohen
By Brad Witter and Jake Viswanath
'RHOSLC’s Heather & Whitney Are Still On A “Friendship Break” After Season 3 Reunion
By Jake Viswanath
Everything To Know About 'RHONY' Season 14
By Jake Viswanath, Alyssa Lapid and Brad Witter
RHOP’s Robyn Dixon Explained Why Juan Paid For Another Woman's Hotel Room
By Brad Witter
Get Even More From Bustle — Sign Up For The Newsletter
From hair trends to relationship advice, our daily newsletter has everything you need to sound like a person who’s on TikTok, even if you aren’t.