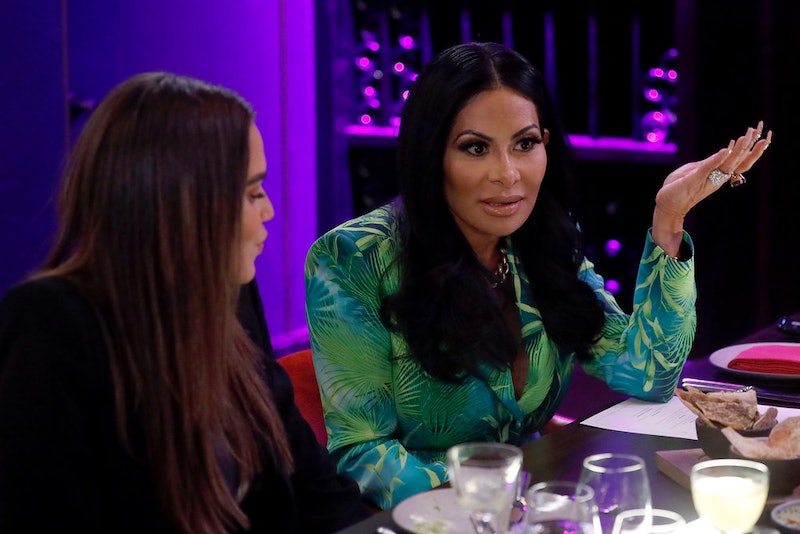 Throughout all the drama on Real Housewives of Salt Lake City, there's almost always one person in the middle of it: Jen Shah. "I'm the one who's always addressing something if I have a problem. I cannot be fake," she told Bustle in November. "I'm really not the one who can sit there and bite my tongue, and I think that's what's always putting me in the center of things."

That's led to a number of fights in Season 1 — including a particularly explosive one in the Jan. 27 episode. Though Jen says that being on the show forced her to accept that "not everybody is going to react the same way as me" and that she has to "appreciate that while holding true to my values and still keeping our friendship intact," it's possible not everyone feels the same. Here's where her friendships stand with the rest of the women roughly one year after filming wrapped.

Jen admits that filming RHOSLC led her to question her friendship with Heather at times, but in the end it made their relationship stronger. "You're drinking from the fire hose of friendship," she said. "Whereas in normal life you would take it a little more gradually and have more time to process, you're forced to deal with things right then and there whether you're ready to speak about it or not."

In a separate interview with Bustle, Heather said that Jen "can be a really sh*tty friend" sometimes (see: her recent subtweet about the date she set Heather up on). But she added that it's impossible for them not to have fun together even when they're fighting, and that most of their issues arise when she speaks her mind, too.

During a Jan. 20 interview on Watch What Happens Live with Andy Cohen, Meredith said that her friendship with Jen "will never be the same" after Jen spread rumors about her marriage on the show. "When you know someone is speaking about you, you lose a level of trust and that’s what friendship is based on,” Meredith explained. The drama spilled onto social media when Meredith accused Jen of bashing her son, Brooks. Jen denied the accusation, asking her to "show the receipts" and claiming she was trying to use her for a Season 2 storyline.

Though they feuded all season, Jen told Bustle that she'd be "totally open" to talking things out with Mary. "Hopefully I can give her the benefit of the doubt, and she will be able to have that conversation," she said in November. And after filming the reunion this month, she hinted to Entertainment Tonight that they've made up. "I've said that all along, there's definitely hope for a future," she teased. "It just depends what Mary said that day, ya know?"

Jen revealed that she and Lisa "are closest right now," thanks in part to their similar personalities. "We are very alike, we're both very direct, so we just naturally gravitated toward each other," Jen told Bustle.

Though Jen singled Whitney out as the person she had the most drama with this season (aside from Mary, that is), she recently defended her costar when it was reported that her friend Sara was part of the Jan. 6 insurrection at the U.S. Capitol. "I've been in contact with Whitney, and I'm confident after our conversation, she isn't at all involved with [Sara]," Jen wrote on her Instagram story, according to a screenshot from Queens of Bravo. "The amount of hate she is receiving on my posts is crazy, and I don't believe she deserves it." (Whitney also disavowed the Capitol riot on Instagram).

Ultimately, Jen said that everyone in the cast is "very cordial and supportive" of each other; but clearly, that's true for some more than others.

More like this
Everything To Know About 'RHONY' Season 14
By Jake Viswanath and Alyssa Lapid
Everything To Know About Danna Bui-Negrete From 'RHOSLC'
By Jake Viswanath
This 'Strictly' Star Is Rumoured To Be The New 'Big Brother' Host
By El Hunt, Maxine Harrison and Sam Ramsden
Brandon & Serene Reveal The Major Relationship Milestone They Celebrated After 'BiP'
By Kadin Burnett and Grace Wehniainen
Get Even More From Bustle — Sign Up For The Newsletter