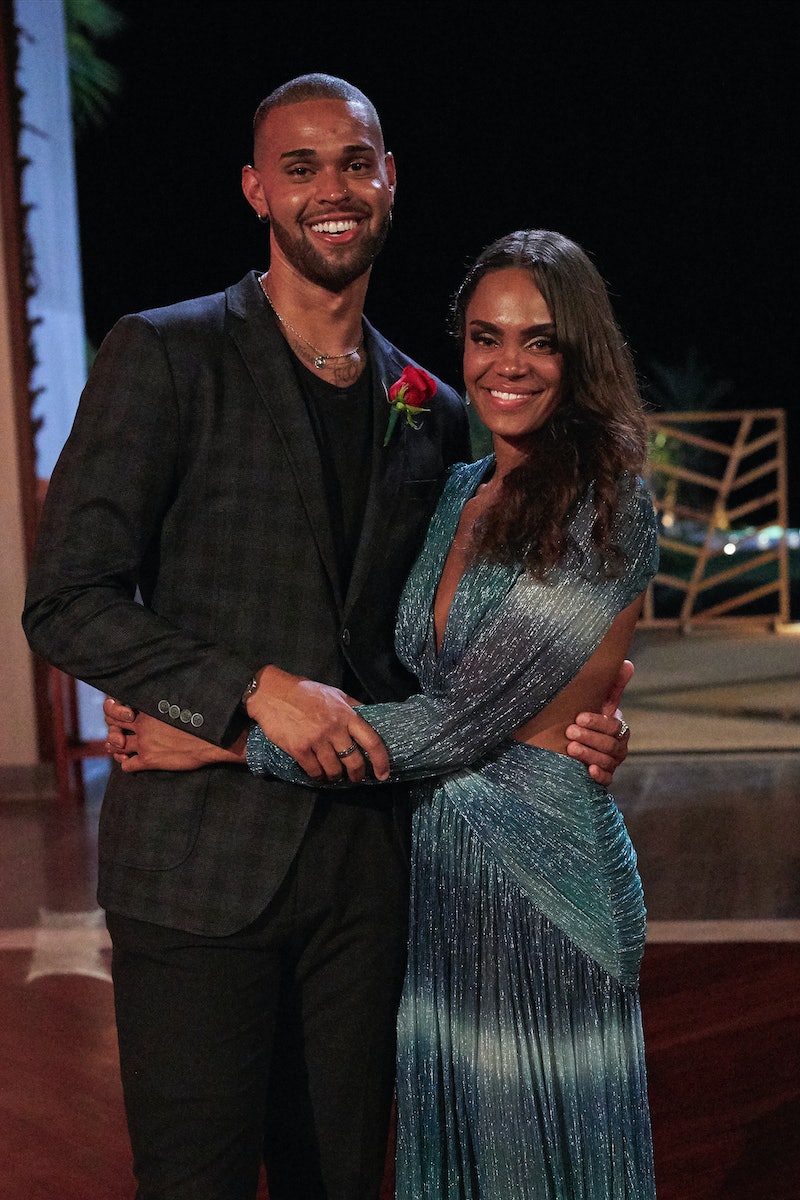 After a long journey toward love, Michelle Young has finally picked her man. It’s the tall, tattooed Nayte Olukoya, the 27-year-old sales executive from Winnipeg, Manitoba. After spending most of the season in Michelle’s good graces, the first impression rose winner ultimately overcame his qualms with vulnerability and commitment and is now engaged to Michelle.

Before we get into their happily ever after, a refresher on the final steps of their onscreen journey: Admittedly, the finale was a little shaky for the happy couple, starting with Nayte meeting Michelle’s parents. “With Nayte, there’s a different vibe than what we saw with Brandon [Jones],” said Michelle’s father. While Nayte was adamant he was ready to get down on one knee, he revealed he and Michelle didn’t discuss anything beyond the engagement. Seriously, Nayte hadn’t even given much thought to the logistics of it all, like where the duo would live.

When talking to Michelle’s mother, Nayte assured her, “I trust myself when I look into Michelle’s eyes and tell her that I love her … my mind and my heart are pointing directly at Michelle.” However, Michelle’s mom remained dubious, revealing that she didn’t believe that Nayte was “100% in” and adding that he isn’t good at expressing his emotions.

Nayte and Michelle couldn’t seem to get on the same page emotionally as they headed into their final date. Their outing involved a shaman and was centered around emotional expression. How convenient! “You’re so emotional, but you pretend not,” the shaman said to Nayte. At that point, Michelle seemed to be losing confidence in their connection, detailing that Nayte’s inability to bring his walls down was both a “massive red flag” and a “dealbreaker. After a slow breakthrough, Nayte was able to tell Michelle, “I could start the rest of my life with you and be the happiest guy in the world. I’m scared as hell. I don’t think I’ve expressed that to you once this entire time.” “This is what I wanted,” Michelle responded.

Finally, the duo exchanged pleasantries about the future. “All I do is think about life with you. All I do,” he told her. “I have very strong feelings for you. Very, very strong,” Michelle told Nayte. Later during an interview, Michelle told the cameras, “All I need is that last piece from Nayte, and I got it.” Calling Nayte her “person,” she added, “Any fears or doubts that I was entering the night with have been resolved.”

In the end, and true to his word, Nayte got down on one knee and proposed to Michelle with a sparkling pear-shaped ring. “I want to run away with you. I want to run away to forever with the woman I’ve come to love,” he said. “I want to let you know that I am completely prepared, willing, and ready to make sure that you are always chosen first [and] seen now, today, tomorrow, and for the rest of our lives. I love you, Michelle.” Unsurprisingly, Michelle accepted his proposal, which inspired Nayte to scream, “This is my fiancée!” Michelle responded, “This is my soul Nayte.”

Michelle and Nayte finally got to open up about their post-show relationship during After the Final Rose. “We always joked about running away,” Michelle said. However, as is customary, Michelle and Nayte had to keep their relationship a secret, keeping their love alive via texts, FaceTimes, and secret meetings. As for any struggles they encountered, Michelle highlighted the potential difficulties of Nayte having to watch her other relationships unfold on national television. However, the two of them ultimately seemed unbothered by the stress of the process.

Michelle’s parents even chimed in on their daughter’s newest relationship, having changed their tune since their last televised conversation. “We are in love with Nayte,” her mother said. As their segment came to a close, Nayte revealed that he was moving from Austin to Minnesota to be all in with Michelle, which felt romantic on its own. That was until Kaitlyn gifted Nayte and Michelle a gingerbread house containing a down payment for their first house together, which should make the move to Minnesota even easier.