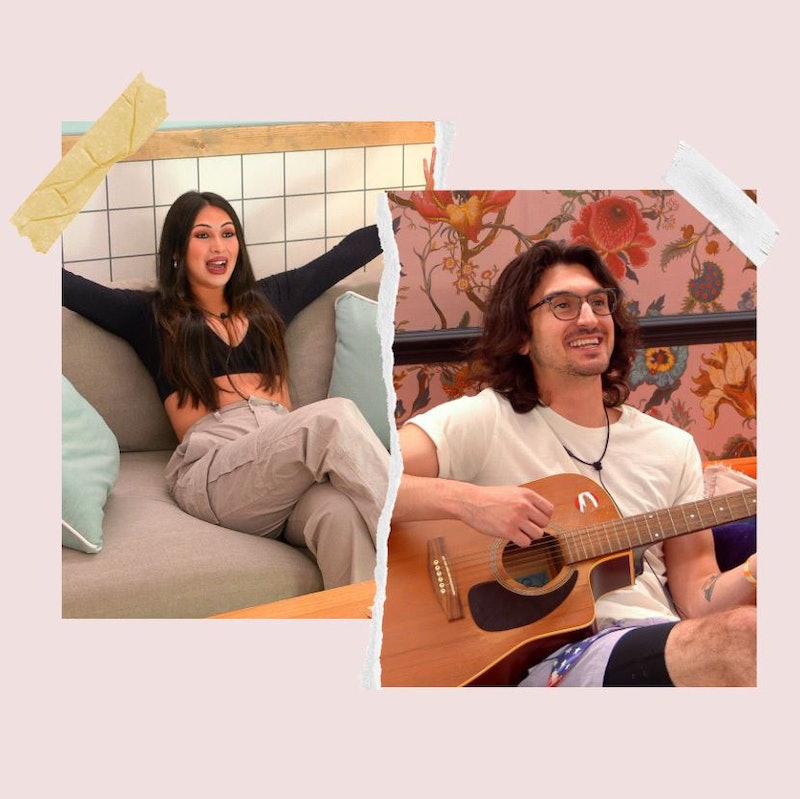 Spoilers ahead for Episodes 1-4 of The Circle Season 4. Every season there’s at least one catfish on The Circle, and yet that hasn’t stopped single contestants from looking for love with their fellow players. Season 1 had Joey and Miranda, Season 3 had Nick and Rachel (aka Jackson), and now there’s Parker (aka Paul) and John (aka Carol), who both came in playing as their parents. John/Carol became an Influencer and ended up voting out Parker/Paul in the first round, but the pair clicked once Parker/Paul went to go meet John/Carol face-to-face.

Parker, whose profile was supposedly a man in his 50s, definitely set off everyone’s catfish radar early on; she didn’t know what a memoir was and claimed to have sent nudes yet have never feigned sick to skip work. When Paul was voted in last place, Parker opened a chat with John in the hopes of winning over Carol with family talk. The viewer learned that both Parker and John were around the same age and both studying communications. That gave Parker hope that she was winning “Carol” over, but it just set off the alarm bells for John. “I have a feeling that ... the daughter’s around the same age as myself. That leads me to believe Parker maybe is the one running this game because she’s studying communications,” he mused. “She could be doing the exact same thing I’m doing. We’re playing a very similar game now.”

The chat left John feeling that Paul was a little more genuine than he initially thought, but it wasn’t enough. When it came time for the Influencer chat, Frank and John agreed they had strong feelings about keeping Alyssa and Crissa, felt more ambivalent about Yu Ling and Bru, and definitely did not trust Paul. It was John, as Carol, who ended up announcing to the group that Paul was the first player to be voted off. “I knew it,” Parker said through tears. “That’s really sucky because I thought Carol and I had a good conversation.”

Naturally, Parker chose to go see “Carol” and was shocked to see John. “I didn’t expect you to be good-looking, not going to lie,” Parker said. They chatted about their family and strategies, as well as their feelings about the other members. “I’m bummed to get to know you and that I blocked you,” John said. Parker agreed, telling he had “a great vibe.”

“This sounds like a match made in heaven,” John then said, to which she agreed, calling the idea of them meeting while both posing as their parents “the best love story.” They sounded very open to meeting up after the show, with John even joking that they were “endgame.” He lives in New Jersey, while Parker lives in Miami, and though those are two very different states, he claimed it’s “not far enough” to not visit.

Of course, it’s difficult to tell if they actually ever went through with plans to reconnect after filming, which likely happened in late 2021. Parker splits her time between Miami and Los Angeles, and her Instagram posts don’t reveal a trip up to Jersey or whether she’s dating anyone new. John doesn’t appear to have any post-The Circle Miami photos on his Instagram, and earlier TikTok videos confirm he’s pretty much single. On Nov. 2, he posted a humorous “boyfriend application” video. In a Nov. 8 video, he stitched a woman suggesting that sex can cure headaches and joked, “Hey honey, we’re out of Advil, but I’ve got an idea ... oh yeah, I should probably get a girlfriend first.” And in a Nov. 11 post, he stitched a video with the caption “did anyone else plan on staying single after their toxic ex but ended up finding their soulmate?” to which he responded, “No, but I got really good at making soups, so to each their own.”

Since then, he hasn’t made any more overt references to being single, but he does often post comedic or flirty stitches with other content creators, like one where he told another girl he “lives in Hoboken, by the way,” tried a Spider-Man pickup line, and joked with a girl about his name. So sure, they could be keeping their relationship on the down low, but it really does look like they’re single. So much for that meet-cute.