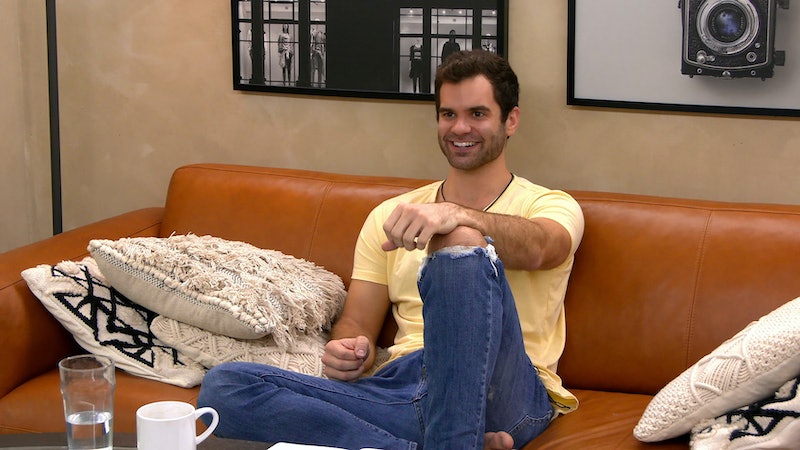 When “Jackson” opened the door to his apartment on The Circle, Nick Uhlenhuth was fully expecting a man to walk into the room. The two had connected over sports and their alliance in “the band.” But little did he know that “Jackson” was actually Rachel Ward, a 24-year-old playing as her best friend’s boyfriend.

“[When I saw Rachel], my first thought was someone was coming into my room, like a dishwasher or something,” Nick tells Bustle with a laugh. “I thought [she] was part of the staff. I was so confused ... So then when Rachel walked in I was like, did I do something wrong? Is my TV broken? I have no clue what's going on. And then she was like, ‘Yeah, I was catfishing.’”

Nick also thought she was “super cute.” “I feel like I probably looked like an idiot, like standing there drop jaw for three minutes,” he says.

The two reconnected at the finale, where host Michelle Buteau asked Rachel and Nick whether they would consider dating each other. They teased that they would give it a try, but Nick says that realistically, distance would be an issue. “She lives in LA, and I live in Austin. We haven't been able to do too much dating,” Nick says. But he adds that he did go visit her, and since then they’ve “been chatting,” though it’s “nothing official.”

Nick also went to visit his “Circle girlfriend” Sophia, who was catfishing as her older sister Isabella. While there, he met the real Isabella, too. “It was only a like pretty brief encounter. I went to Florida ... and we all just went out for drinks,” he says. “I’m pretty sure the real Isabella is married.”

Though Nick didn’t find romance on The Circle, he says he at least met his gameplay match in Kai Ghost, who he dubbed his arch-nemesis. “I was looking at the things she was typing in the group conversation, and in the one-on one-conversation. To me, it seemed like she was so good about choosing her words in a way that wasn't going to offend anybody,” Nick says, explaining why he targeted her as the strongest player so early on. “I could tell that she was reaching out and making connections to other people in the group chat. It felt really similar to the kind of style of game I was trying to go after. So I just respected her gameplay, and saw it as a threat because I felt like it really rivaled what I was really trying to do.”

Throughout the season, Kai and Nick solidified two very distinct and separate alliances. And for most of the time, it seemed inevitable that one of them would win the $100,000 prize — which is what made it all the more shocking when James won instead. At the end of the competition, James “didn't really feel like a big threat,” Nick says. “We were Influencers, but I still thought Kai was the main leader of the other team, rather than James. So I think because Kai and I was such a big targets, we got rated low.” That allowed James, a newer player who reached out to people on either side of the alliances, to “rise to the top in the last rating,” Nick says.

Looking back now, Nick admits he has some regrets about his choices. When he was given the Influencer power, Nick blocked Ruksana rather than Kai, who he made an agreement with. “But I do always go back and think, what if I had blocked Kai?” He reasons that Kai probably rated James highly in the end, and after talking to Ruksana after the show, he realized she never had an issue with him; he had just never reached out to her directly. Had he actually tried to connect with Ruksana, he muses, things may have gone another way.

Nick says he also wishes he used his Vince power differently. “I thought the main advantage [of the burner profile] was that I was going to be able to actually rate other players as Vince, so I was going to get a double rating power,” he says. When that obviously didn’t happen, Nick realized he could’ve used the profile in a more aggressive manner. “Looking back, I was like, man, I wish I used Vince to stir the pot more, maybe use Vince to throw some shots at James.”

Nick says there are no hard feelings between him and the other players now, and that they all regularly chat. “Kai and I are really good friends now,” he explains. “We've connected on music and fitness, and we talk about non Circle-related things quite a bit, which is nice.” And though he lost to James, Nick doesn’t hold that against him. “James is probably my best friend from the whole cast. We talk like, daily.”

More like this
Love Is Blind’s Natalie Claims Shayne Signed Up For 'Perfect Match' While They Were “Still Together”
By Brad Witter
Jin-young Reflected On His Relationship With Seul-ki After 'Single’s Inferno'
By Brad Witter
'Love Is Blind: After The Altar' Season 3 Has A Release Date & It's Very Soon
By Grace Wehniainen
A New Netflix Doc Will Explore The Unsolved Murder Of Jill Dando
By Sam Ramsden
Get Even More From Bustle — Sign Up For The Newsletter
From hair trends to relationship advice, our daily newsletter has everything you need to sound like a person who’s on TikTok, even if you aren’t.