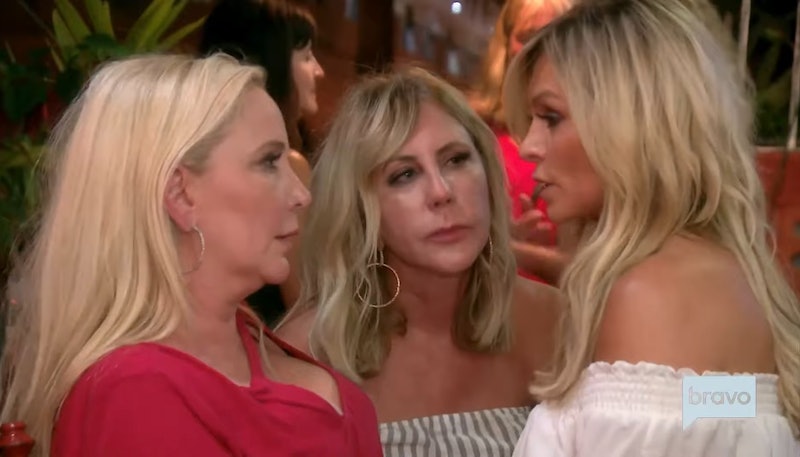 When Bravo fired Vicki Gunvalson and Tamra Judge from The Real Housewives of Orange County after Season 14, only one member of the “Tres Amigas” — Shannon Beador — remained. In the aftermath of their 2019 departures, Vicki and Tamra said they felt Shannon abandoned them, and the onetime inseparable trio’s friendship ended as abruptly as their time on the reality series did. After trading barbs in the press with Shannon for years, the women, who are now appearing on Peacock's The Real Housewives Ultimate Girls Trip: Ex-Wives Club, gave a hopeful friendship status update.

“We were on a three-way text, Shannon, Tamra, and I, talking about getting together,” Vicki recently told Entertainment Tonight. “I Facetimed with Shannon the other night. ... She told me she loves me, she misses me, she needs me back on the show... blah, blah, blah. It was great, and then she called me afterward. She goes, ‘I really love you,’ when she got home. I said, ‘OK, I love you, too, but where’s the last two years been? Because I wasn’t on the show you didn’t love me?’ She goes, ‘I did...’”

Tamra, for her part, recently refollowed Shannon on Instagram, sharing that the “Tres Amigas” also communicated via group text this past Mother’s Day. She ultimately credits sticking up for her ex-castmate during RHOC Season 16 on her Two Ts in a Pod podcast as opening the door for a possible reconciliation earlier this year. While admitting they still have “a lot to talk about,” the CUT Fitness founder added to ET, “Most of all, our feelings got hurt. It’s a hard place to be, where you get fired from a show that you’ve been on for so long ... and then have one of your good friends not reach out to you.”

Before their breakthrough, Shannon told Access Hollywood in November 2021 that she didn’t want Vicki or Tamra to return to RHOC amid their ongoing feud. “[Tamra] was my best friend for six years,” she explained of the “sad” falling out. “After she left the show, she’s been out there in the press quite often, saying things about me that are untrue. So, I’ve chosen to not engage and not address it.” After catching wind of Shannon’s comments, Tamra responded in a since-deleted November tweet, writing, “STFU you victim-liar! Not engaging is ‘no comment.’”

The same month, Page Six also captured an Instagram comment in which Tamra reiterated all she’s ever said is that Shannon stopped talking to her shortly after she and Vicki were let go and “how bad it hurt” her when she “needed her most.” She continued, “I was always there for you. IF THE TRUTH HURTS SO BE IT! You s*** on me! That’s why you can’t keep friends.”

Meanwhile, Shannon revealed on Bravo’s Watch What Happens Live with Andy Cohen in March that she and Vicki had recently run into each other at a restaurant and exchanged brief pleasantries. Afterward, on a podcast, Vicki reportedly said she considered them to be reconciled. Though Shannon didn’t exactly seem to be on the same page, she added that it was “sad all around” because she “had a really fun, great friendship” with the “Tres Amigas.”

With this latest development, it might only be a matter of time before they reunite to “whoop it up” together again. With Tamra and Vicki expressing interest in returning to RHOC, the reconciliation might even happen on camera.