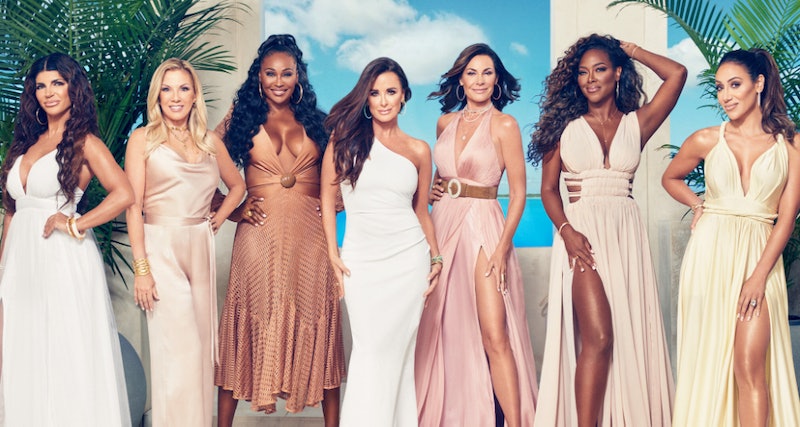 Anyone who has spent several hours binge-watching seasons of The Real Housewives has envisioned what an all-star version of the franchise would look like, complete with their favorite cast members. Bravoholics, consider your wishes granted. People reported that a Real Housewives spinoff series is headed to Peacock, and the streamer revealed its title: The Real Housewives Ultimate Girls Trip. Bravo announced on April 26 that notable franchise stars from RHOA, RHONY, RHONJ, and RHOBH will live together in one house set in a tropical location for the entirety of filming. Following Peacock’s release of the series’ official trailer on Oct. 11, here’s everything we know about The Real Housewives Ultimate Girls Trip:

On April 26, Peacock officially announced the series and its cast, which includes seven Housewives from Atlanta, Beverly Hills, New Jersey, and New York. Ramona Singer and Luann de Lesseps of RHONY, Teresa Giudice and Melissa Gorga of RHONJ, Kenya Moore and Cynthia Bailey from RHOA, and Kyle Richards from RHOBH are all set to appear on the show, which will follow the group on vacation.

Prior to the official casting announcement, Page Six reported the news, citing a tweet from former TMZ journalist Anthony Dominic, who revealed which Housewives were in talks for the series. While he was spot-on with many cast members, he also mentioned RHOBH star Lisa Rinna and Sonja Morgan from RHONY, both of whom are not confirmed for the Peacock show.

Bailey, who recently announced she will not return to RHOA, was the first rumored cast member to speak out about the spinoff, telling Us Weekly that she’d “love the opportunity” to be involved because “it’s something that the fans have been looking forward to seeing.” When asked about the show’s specifics, Bailey said, “I cannot tell you that much about it. Bravo has not officially released that information yet, but I can say that I think it’s a brilliant idea.” The concept was something she’s open to considering her bicoastal living arrangement with her new husband, Mike Hill.

“I think the fans have been waiting for something like this for a long time. You know, even with me being bicoastal, I often get my fans [saying], ‘Oh, we want you to go to Beverly Hills and play with them,’ but they still want me to be in Atlanta,” Bailey told the outlet. “So, I always thought it’d be kind of great to crossover anyway and shoot sometimes with Beverly Hills ’cause I am in a bicoastal relationship and marriage, definitely.” Among the Housewives Bailey would be open to rooming with, she listed now-confirmed cast members Richards, Singer, Gorga, Giudice, and de Lesseps, as well as Erika Jayne and Garcelle Beauvais of RHOBH.

As revealed by Entertainment Tonight on April 26, the Housewives filmed Ultimate Girls Trip in Turks & Caicos, and many of them shared photos from the trip on social media while filming was underway.

Gorga and Singer posted snaps boarding their flights to the islands to Instagram. “Nothing represents Jersey like [leopard],” wrote the RHONJ star. Alongside a photo sipping a drink on a plane, the RHONY cast member penned the caption: “Heading to paradise!”

Many of the ladies also took to Instagram to share their picturesque backdrops and bathing suit photos. “Seas the day,” de Lesseps captioned a photo of herself posing on a beach in a white bikini.

Sharing a photo of herself on a boar in a bright green bikini, Moore wrote on Instagram, “Serving with a side of lime.”

Along with the official trailer’s release on Oct. 11, Peacock revealed that The Real Housewives Ultimate Girls Trip would premiere on the streaming service on Nov. 18. It’s unclear how many episodes will drop at first, but the streamer noted that new episodes would be released every Thursday.

This isn’t the only new project circulating in the Bravosphere. A long-awaited fourth season of Real Housewives of Miami has been announced at Peacock, NBCUniversal’s streaming platform. Meanwhile, cast members from both Summer House and Southern Charm are expected to merge for a new isolation-era spinoff series titled Winter House.

Peacock released the official trailer for The Real Housewives Ultimate Girls Trip on Oct. 11, and it looks like Bravoholics are in for a wild ride. Between fun-filled party scenes, dramatic fights, de Lesseps spilling a glass of wine, and Singer literally peeing herself, the all-stars season is bound to entertain you.

The trailer also sees Richards telling her husband Mauricio Umansky of Singer, “They call her the Ramonacoaster because she’s just all over the place,” which appears to only scratch the surface of several Housewives’ tension with the RHOBH star on the trip. Moore is heard questioning the genuineness of Richards’ friendships with the other women, while Bailey expresses feeling “a little irritated” by her actions. Furthermore, Bailey and Moore appear to butt heads with one another. “Ramona’s not my friend, you’re my friend. So act like it,” says Bailey in the clip.