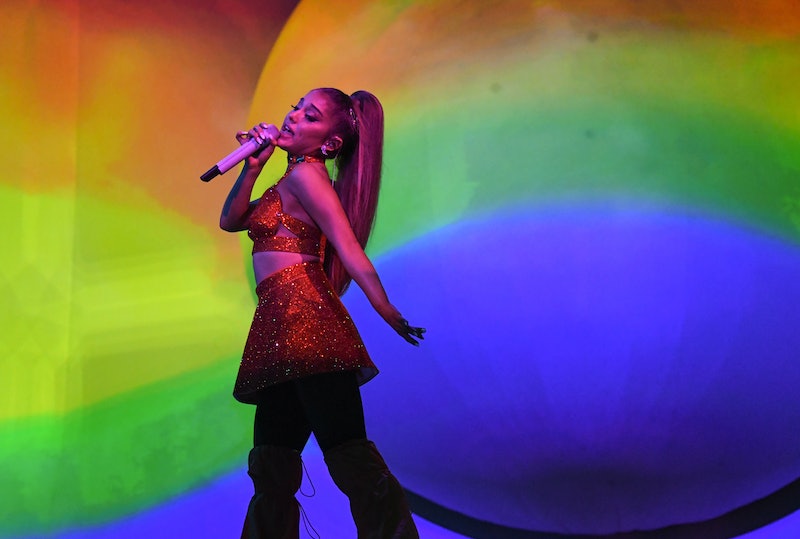 Arianators are about to receive their Christmas present early this year. Ariana Grande's Excuse Me, I Love You trailer gives fans a behind-the-scenes look at the Sweetener World Tour, her most successful tour to date. And the Netflix concert film just might prove that the 2019 trek meant a lot more to the singer than what even her biggest fans thought.

The new trailer shows a preview of Grande's acclaimed show, including clips of her flashy "7 rings" number and the rainbow-filled, Pride-themed performance of "Break Free." According to Netflix, the tour was filmed in London. But most importantly, the trailer reveals an inside look at the concert, showing unearthed rehearsal footage, candid moments with her family (including her mom Joan and iconic Coach model dog Toulouse), and times when she got emotional with her own team backstage.

In a particularly heartfelt moment, Grande spoke to her crew backstage in a prayer circle before they took the stage, telling them the tour has helped her more than they know. "Guys I know it's been hard, physically and mentally, but like, this show for sure has saved my life this year," she said to her band and dancers while holding back tears before immediately lightening the mood. "Wait I just inhaled a tear."

Grande has been hinting at the existence of a Sweetener Tour documentary since releasing her live album, k bye for now (SWT Live) in December 2019, when the year-long jaunt ended. On Tuesday, Dec. 8, the singer tagged Netflix in pictures from the show on Instagram before finally confirming the film's title and release date, which will fall on the one-year anniversary of the tour's final show. In an Instagram note, Grande said she was releasing Excuse Me, I Love You as a "love letter" to her fans to celebrate the past few years, which included the release of three studio albums: Sweetener, Thank U, Next, and her most recent effort, 2020's Positions.

"I know this project only captures some of one tour (out of all the other hundreds of shows and moments we have shared over the past six or seven years… jesus lol) but i just wanted to thank u all for showing me more in this lifetime already than i ever dreamed of," she wrote. "Making music and doing all of this has been all i’ve known or fully given myself to consistently for a very long time now." Although she mentioned being ready for a "change of pace," she said she was looking forward to the future. "I've learned, seen and felt so much," she concluded. "It's been such an honor to share so much of this life with u."

Excuse Me, I Love You will stream on Netflix on Dec. 21.