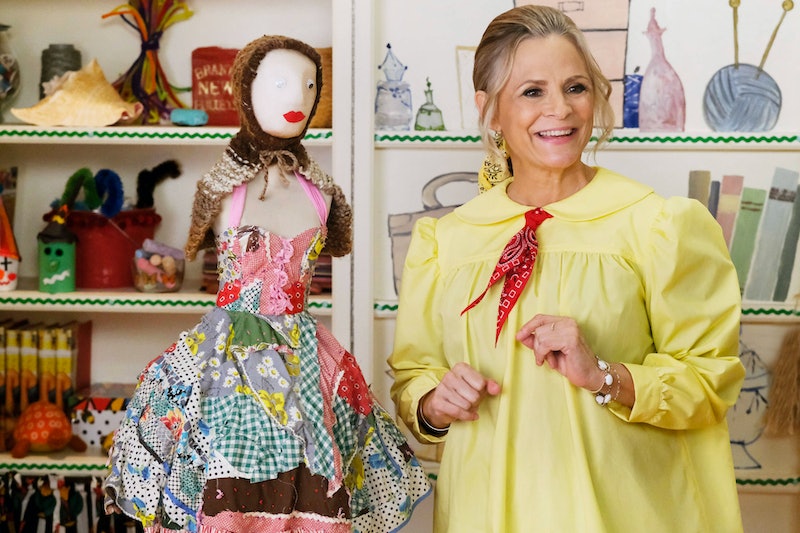 Ahead of its Season 3 finale on July 29, there's no word on whether At Home with Amy Sedaris Season 4 has been greenlit. But there's still time. The truTV series was renewed for its current season on May 9, 2019 — a year ahead of its Season 3 premiere. So if it follows the same pattern, the comedy series could get renewed any day now, perhaps even premiering at the same time next year.

In addition to playing a number of bizarre characters, Sedaris's cooking show parody features recurring appearances from comedians like Cole Escola, Los Espookys star Ana Fabrega, and Heather Lawless, along with an expansive list of guests. In Season 3 alone, cameos have included Jason Sudeikis, Michael Cera, Paul Rudd, Ann Dowd, Justin Theroux, and David Alan Grier, among others. But even if At Home does return for a Season 4, it will probably be at least a year before more episodes air. And while Sedaris' old Comedy Central series Strangers with Candy isn't streaming everywhere, there are plenty of other shows to keep fans occupied while they wait on any renewal updates. Below, a selection of shows to try next.

This TBS-turned-HBO Max series stars Alia Shawkat as Dory, a Brooklyn hipster who becomes obsessed with finding her old NYU classmate, Chantal, after she goes missing. It also stars John Early (who often pops up in At Home), as well as John Reynolds, Meredith Hagner, and Brandon Micheal Hall. Escola even turns up in Season 3.

Robin Thede created this Emmy-nominated HBO series, which she stars in along with Quinta Brunson, Gabrielle Dennis, and Ashley Nicole Black. Some sketch highlights include "Church Open Mic" ("Why are her pies wet, Lord?"), "Rome and Julissa," and "The Basic Ball," among others.

Where to stream: HBO Now or HBO Max

It's tough to match the bizarre energy of At Home, but Maria Bamford's offbeat Netflix series Lady Dynamite gets pretty close.

You may recognize Jamie Demetriou from Fleabag, where he played a character named simply "Bus Rodent" whom Phoebe Waller-Bridge's protagonist flirts with on public transit. In this Channel 4 series, Demetriou plays the titular Stath — a man who is simply terrible at his job of renting apartments. Think of it as the British version of Detroiters (which is sadly not streaming anywhere, either!).

If you're missing the actual crafting aspect of Sedaris' show, then try this Amy Poehler and Nick Offerman-hosted crafting competition, which is both kind-hearted and educational.

Where to stream: Hulu or Peacock

This gone-too-soon Netflix series featured the all-Black comedy troupe the Astronomy Club. It's goofy, smart, and its cancellation is a travesty.

This is the baking show for food enthusiasts who maybe aren't great in the kitchen themselves. These contestants can relate.

OK OK, so not many people signed up for Quibi, but if you happen to be one of those people, check out the Matt Rodgers and Dave Mizzoni-hosted game show, where straight contestants duke it out for the chance to be named "Queen of the Straights." Much like At Home, it features a variety of guests, categorized into "Wise Queers" like SNL's Bowen Yang (Rogers' cohost on their podcast, Las Culturistas), Joel Kim Booster, and Trixie Mattel; and a "Woman Who Gets It," the likes of which include Robin Thede, Ilana Glazer, and Nicole Byer.

Where to stream: Quibi

More like this
Ava DuVernay Thought The 'Queen Sugar' Series Finale Felt “Really Satisfying”
By Brad Witter
Brooke & Cru Have Hinted That They’re Still Together After 'Back In The Groove'
By Brad Witter
Larsa Pippen Is Reportedly Dating The Son Of A Legendary NBA Player
By Jake Viswanath
Is Queen Elizabeth II Or The Royal Family In Netflix’s 'Harry & Meghan' Docuseries?
By Jake Viswanath
Get Even More From Bustle — Sign Up For The Newsletter