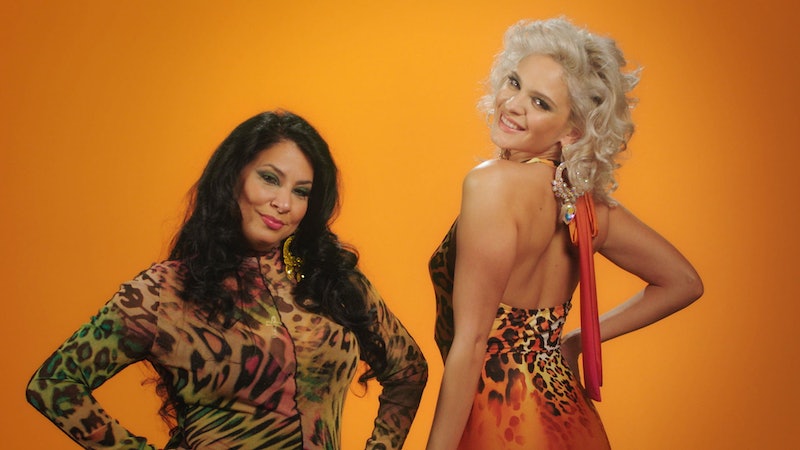 In a game like The Circle, sometimes two heads are better than one — and Season 3 contestants Ava and Chanel Capra are taking that literally.

Like Ed and Tammy Eason in Season 1 of the Netflix competition show, the sisters are secretly playing together under Ava’s profile. Ava is a 25-year-old singer-songwriter and influencer, while Chanel is a 42-year-old with one of the thickest New York accents you’ve ever heard. “I really love that we have this age difference,” Ava says in her intro, calling Chanel “older” and “wiser.”

Chanel, who helps manage Ava’s career, describes herself as very protective of her sister, adding that she’s like a second mom. She says she’ll be the “filter” behind Ava’s profile, but that flirting will definitely be part of their strategy.

Here’s everything else to know about the Capras.

Chanel and Ava definitely have different approaches to social media, so it should be interesting to see how that affects their game. Ava’s Instagram feed looks like a typical influencer’s, including plenty of SponCon, bikini shots, and of course, promo for her music career. She also appears to be based in Los Angeles, and frequently posts pictures of herself visiting gardens, paddleboarding, and posing in other places throughout the Golden State.

Chanel’s Instagram presence has a more personal feel. In addition to some shots of her and Ava together, she shares a lot of content about her dog, nails, and God, though she also posts the occasional glamour shot or BTS pic from her work with Ava.

Beyond Instagram, Ava is active on Cameo and TikTok, where she posts videos about her music, her cat, and The Circle. She also has a YouTube page, though she hasn’t posted in about a year. She’s mostly shared vlogs, as well as makeup tutorials and funny videos of her trying keto cereal and spicy candy.

Though Ava doesn’t appear to have released any music officially, she wrote on Instagram that she’s currently working on the music video for her single “Drowning.” For a taste of her musical stylings, you can check out the “singing” highlight on her Instagram feed. She also shared a cover of her singing Justin Bieber’s “Love Yourself” on YouTube a few years ago.

Chanel & Ava Both Have Entertainment Experience

The Circle isn’t Ava’s first time on reality TV. In 2015, she competed on the 22nd season of America’s Next Top Model, where she came in 12th. She’s also appeared in a handful of music videos, including the one for “Zombie” by Bad Wolves and “Cocaine” by Jez Dior.

Chanel, meanwhile, has made a few cameos of her own. According to IMDb, she acted in Free Willy 2 in 1995 and Nora’s Hair Salon II in 2008. But she mostly works behind the scenes. She produced Lil Mama’s “Doughboy” music video in 2011 and now runs Bella Mafia Entertainment, a media company focussed on developing music, film, television, and art. Naturally, Ava is one of their biggest clients. “Beyond proud to leap forward in our iconic journey with our star client,” reads a recent Instagram post from the company. “Ava we are so proud of you and all your hard work…you are amazing and you deserve the world.”