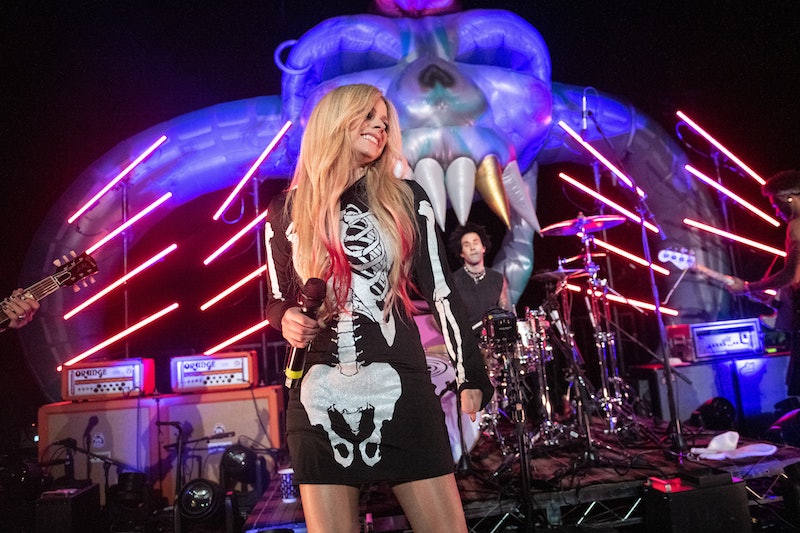 It’s a good time to be a pop-punk fan — because two of the genre’s most beloved voices are working together on something big. Avril Lavigne and Travis Barker officially joined forces when the “Sk8er Boi” singer announced on Nov. 3 that she’d signed with Barker’s label, DTA Records. It was then, amid a festive mess of frosting and bubbly, that Lavigne teased new music coming super soon: “Let’s f*ck sh*t up! ... Should I drop my first single next week?” she wrote on Instagram.

Apparently, she couldn’t wait, and neither could fans. One day after revealing the title of her new single, “Bite Me,” which will be released Nov. 10, Lavigne took to TikTok to share a snippet from the song — which, fittingly, features Barker on drums. (Marshmello will also be on the track, according to Billboard.) It’s just a 15-second glimpse at the collab, of course, but the lyrics are already breakup anthem gold: “You should’ve known better, better / To f*ck with someone like me / Forever and ever / You’re gonna wish I was your wifey / Should’ve held on / Should’ve treated me right.”

Visually, the clip comes from a pink-lit room — and the camera zooms in on a DTA Records sticker on Lavigne’s guitar, a nod to her new digs at Barker’s label.

Lavigne and Barker working together isn’t totally new territory, of course. The artists have been showing up for each other since the early days — from Barker drumming on Lavigne’s The Best Damn Thing back in 2007, all the way to Lavigne performing at Barker’s House of Horrors event this past Halloween weekend.

Still, a new song was enough to thrill the musicians’ respective (and often overlapping) fandoms. For many, the sound of “Bite Me” was delightfully mid-aughts. “Now this sounds like the old Avril,” commented one TikTok user. Another asked, “So you’re telling me this tiktok wasn’t recorder back in 2007?” Yet another fan also noted the song’s nostalgic vibes: “Suddenly I feel the teen angst coming back.”

Separately, a TikTok viewer wondered if Barker’s fiancée, Kourtney Kardashian, might have been behind the camera for the brief clip — “You’re doing amazing sweetie” — while a different fan credited Barker with fostering the genre. “Travis is gonna single handedly revive mainstream pop punk and I’m here for it,” the user wrote.

The “Bite Me” love continued on Twitter. “She’s coming to save the music industry,” wrote one stan, while another borrowed a line from “Girlfriend” to celebrate Lavigne: “She is an icon and the motherf*cking princess we stan.”

Lavigne got plenty of personal praise, too. Her boyfriend, Mod Sun, told the singer he was “so proud” of her on Instagram. “Gonna shake the world,” he commented on her single announcement post. Even Lavigne’s ex showed up to share the love: “Let’s gooooooooooooooo,” wrote Brody Jenner, also noting his excitement for Lavigne’s upcoming collab with MGK.