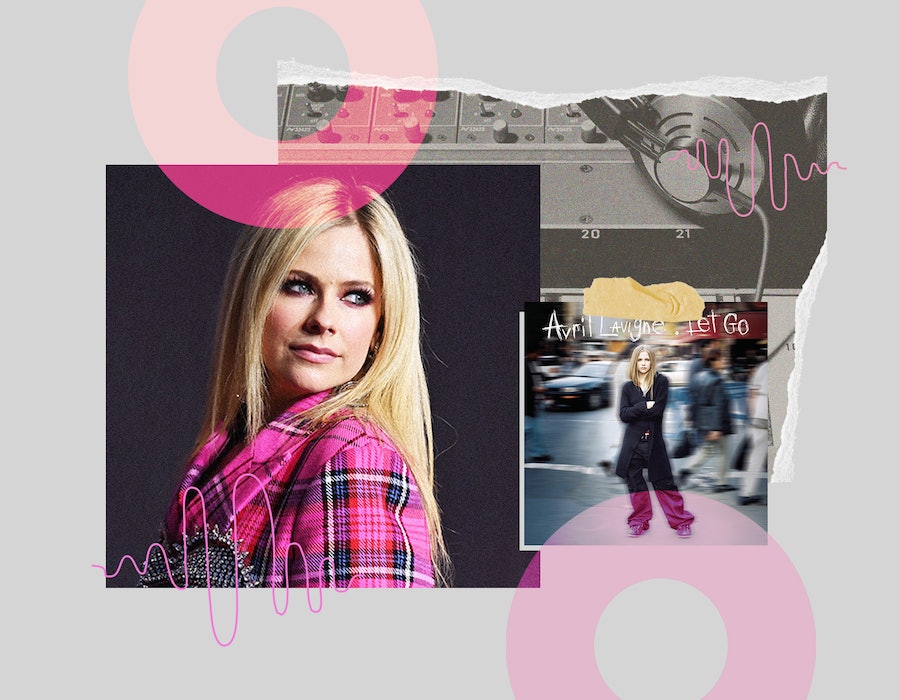 We’ve hit peak pop-punk. Over the past two years, the genre often associated with the early 2000s has dominated the charts and the zeitgeist alike. Machine Gun Kelly became a household name after trading rap for rock with his 2020 album, Tickets to My Downfall. TikTok established itself as a breeding ground for the sound, ushering in a new class of pop-punkers like Lil Huddy and Jxdn. And Blink-182 drummer Travis Barker is more famous than ever, both for producing the aforementioned acts and for his engagement to Kourtney Kardashian. But Avril Lavigne — the pioneering princess of the pop-punk movement — implores you not to call it a comeback.

“Over the last 20 years, all of my shows have carried that energy and vibe. Everyone’s just rocking out, moshing, jumping, and fist-pumping,” she tells Bustle. “When some people are like, ‘It’s back, I’m like, ‘It’s always been there for me, baby!’”

When Lavigne first burst onto the scene, pop-punk was decidedly not the sound du jour. In 2001, artists like Alicia Keys, Janet Jackson, and Jennifer Lopez were dominating the radio with their R&B-leaning records. But come the 2002 release of Lavigne’s debut album, Let Go, the genre had found a home on the Billboard Hot 100. And while haters were quick to call the then-16-year-old’s style a phase, Lavigne remained steadfast in her commitment to it. “In high school I started wearing baggy clothes, I grabbed a guitar, and that vibe’s always been a part of who I am as a performer,” Lavigne says. “I enjoy all sorts of styles of music, but at the end of the day, I love rock and roll music.”

Ever since Let Go’s release, mainstream interest in pop-punk has waxed and waned. But Lavigne has continued to pay the detractors little mind. “Music is cyclical for the general public. Things come and go, what’s being played on the radio and all that,” she explains. “But as an artist, I always try to evolve while still staying, to my core, who I am.” Now, 20 years after dropping her debut, Lavigne is celebrating with both a reissue of Let Go and a brand new, chart-topping, Barker-produced album, Love Sux. “I’m just happy to see the young generation discovering this genre. They didn’t for a minute, so everyone’s stoked on it.”

Below, Lavigne talks barbecuing with MGK, her Spice Girls obsession, and the song off of Let Go that she’d want to play at her funeral.

On Discovering Blink-182 And Collaborating With Travis Barker

What’s the first CD or tape you remember buying?

I only had a handful of CDs, so it would have been Shania [Twain], Alanis [Morissette], and Blink-182.

Do you remember the first time you heard Blink-182?

I was in high school. It’s really cool that I’m working with Travis [Barker] and Mark [Hoppus] on this album because it’s full circle. When I first started singing, I was really young, around church. The only other place I could really sing were fairs around town [where] I had to sing country music. But then when I was 13 or 14, I was like, “I’m not into this!” I had a guitar around the house — it was my dad’s from when he was in high school — and I started writing my own songs because I didn’t like the songs I was singing. Green Day, Goo Goo Dolls, Matchbox Twenty, and Blink-182 had a pretty big impact on me musically because I connected with the angst and the rock and roll. That helped shape me.

What has that full-circle experience of now working with Travis actually been like?

I’ve never made a record in Calabasas before. It’s always been Hollywood or something. The vibes were fun, the music was fun. I loved everyone I was working with and it was easy. At this point in my career I’m like, “I only have room for fun.” I worked really, really hard and I’ve been doing this for so long. I don’t have to be doing this. I’m literally doing it because I love music.

On Barbecuing With MGK And Writing A Song Over Hot Dogs

What’s the weirdest way a song of yours has ever come to be?

I would say the latest song, “Love It When You Hate Me,” was last-minute. It was Fourth of July and everyone was on vacation and me and Mod [Sun] went over to Feldy’s [producer John Feldmann] house and I brought hot dogs. Then I was like, “Feldy, get on the barbecue.” We’ve never cooked together in a session, but he made the hot dogs and we wrote “Love It When You Hate Me.” It was the last thing we worked on.

You also spoke about barbecuing with your collaborators in your recent NYLON cover story. Are you guys always grilling?

Did I really? That’s funny. We had a Memorial Day one when Kels [Machine Gun Kelly] was here. We do that. They leave really good memories with me.

What’s the song that should play at your funeral?

“Here’s to Never Growing Up” or “I’m With You” would be cool. Everyone has a beer, shakes it, and throws it on me.

... And Her Unabashed Love Of The Spice Girls

“Wannabe.” I love the Spice Girls.

Have you ever gotten to meet any of the Spice Girls?

Hell yeah! One time Geri Halliwell interviewed me when I was in the UK and I was like, “Shut up!” I think I was at a festival backstage and she was doing interviews and I was like, “Oh my God. This is so crazy.”

More like this
Becky G Once Had A Fear Of Speaking Spanish. Now She's Topping The Latin Charts.
By Tess Garcia
Kourtney & Travis Crashed His Daughter’s TikTok Live In Their 2nd Wedding Outfits
By Grace Wehniainen
Stormi Just Walked A Red Carpet With Mommy Kylie Jenner & Daddy Travis Scott
By Hugh McIntyre
Twitter Has Very Mixed Feelings About The New 'American Idol' Winner
By Jake Viswanath
Get Even More From Bustle — Sign Up For The Newsletter