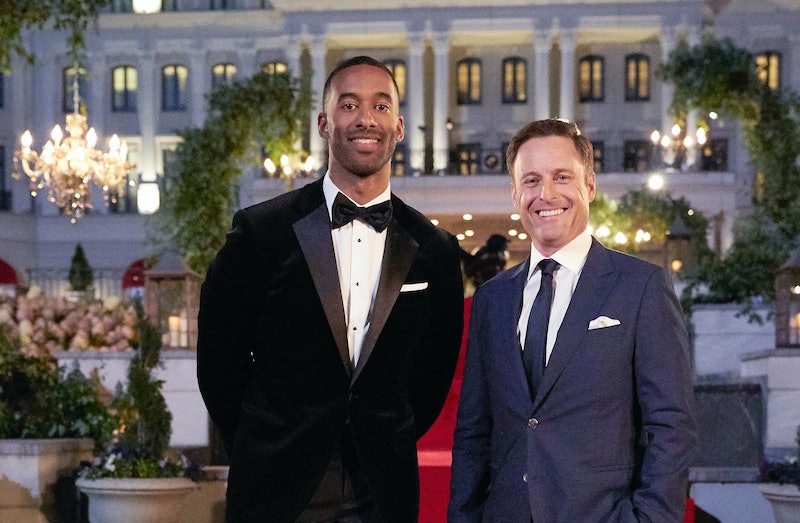 Following weeks of controversy, apologies, and the host's decision to "step aside" indefinitely, Bachelor Matt James responded to Chris Harrison and Rachael Kirkconnell's recent controversies in a statement released on Instagram on Feb. 22. In addition to addressing the "challenging" situation itself, Matt also acknowledged that Chris' defense of Rachael — and the subsequent criticism he received from Bachelor Nation — was proof that the franchise as a whole needs to do more to support its BIPOC leads and contestants.

"The past few weeks have been some of the most challenging of my life, and while there are several episodes left of the season, it is important that I take the time to address the troubling information that has come to light since we wrapped filming, including the incredibly disappointing photos of Rachael Kirkconnell and the interview between Rachel Lindsay and Chris Harrison. The reality is that I’m learning about these situations in real time, and it has been devastating and heartbreaking to put it bluntly. Chris’s failure to receive and understand the emotional labor that my friend Rachel Lindsay was taking on by graciously and patiently explaining the racist history of the Antebellum South, a painful history that every American should understand intimately, was troubling and painful to watch. As Black people and allies immediately knew and understood, it was a clear reflection of a much larger issue that The Bachelor franchise has fallen short on addressing adequately for years. This moment has sparked critical conversations and reporting, raised important questions, and resulted in inspiring displays of solidarity from The Bachelor nation. It has also pushed me to reevaluate and process what my experience on The Bachelor represents, not just for me, but for all the contestants of color, especially the Black contestants of this season and seasons past, and for you, the viewers at home. I will continue to process this experience, and you will hear more from me in the end. My greatest prayer is that this is an inflection point that results in real and institutional change for the better."

Not long after Matt's season of The Bachelor premiered, posts began circulating on TikTok that Rachael — who is rumored to be a frontrunner for his affections — had liked racist and problematic social media posts and even bullied a high school classmate for dating Black men. In early February, Matt addressed the rumors during a conversation with Entertainment Tonight and revealed that at that time, he hadn't yet spoken to any of his contestants about the controversy. "I would just warn people to be careful about making accusations before someone’s had a chance to speak on it," Matt said. "And rumors are dark, and they’re nasty, and they can ruin people’s lives, so... I would give people the benefit of the doubt, and hopefully, she’ll have her time to speak on that."

However, on Feb. 10, photos of Rachael dressed in costume as a Native American and attending a plantation-themed fraternity formal in college surfaced on Reddit. The 24-year-old subsequently apologized for her "offensive and racist actions" in a statement on Instagram, but Harrison defended her during an interview with Rachel Lindsay, arguing that people weren't aware of the antebellum theme's racist connotations in 2018. "The woke police is out there," he said at the time. "And this poor girl Rachael, who has just been thrown to the lions, I don't know how you are equipped when you have never done this before, to be woke enough, to be eloquent enough, to be ready to handle this."

Harrison's comments were met with criticism from fans and members of Bachelor Nation, many of whom called for ABC to fire him as host and producer of the franchise. He apologized for defending Rachael in a way that "perpetuates racism," and on Feb. 13, Harrison announced on Instagram that he would be "stepping away" from The Bachelor for an unspecified length of time. "By excusing historical racism, I defended it. I invoked the term 'woke police,' which is unacceptable. I am ashamed over how uninformed I was. I was wrong," he wrote in his statement.

In addition to Matt's statement about the "troubling" situation The Bachelor is currently facing, 25 of his contestants — all of whom identify as BIPOC — shared an open letter denouncing any "defense of racism" from the franchise. "We are the women of Bachelor Season 25. Twenty-five women who identify as BIPOC were cast on this historic season that was meant to represent change," reads the statement, which contestants shared on Feb. 11. "Rachel Lindsay continues to advocate with 'grace' for individuals who identify as BIPOC within this franchise. ... We stand with her, we hear her, and we advocate for change alongside her."