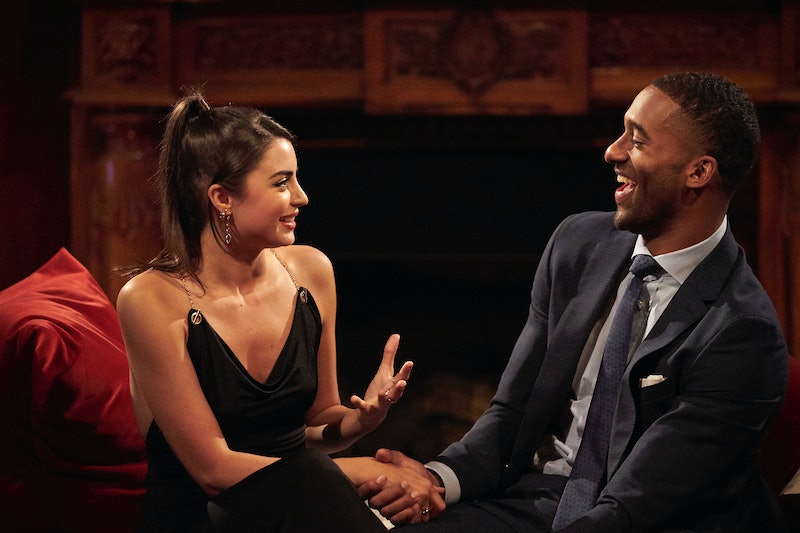 After weeks of rumors and unverified reports about her controversial social media activity, Bachelor contestant Rachael Kirkconnell apologized for her past "racist" actions in a statement shared on Instagram on Feb. 11. The 24-year-old, who is rumored to be a finalist on Matt James' season, has faced criticism from fans and former Bachelor contestants after a series of TikTok videos accused her of liking racist social media posts and bullying a classmate for dating Black men. In early February, photos of Rachael dressed in costume as a Native American and attending a plantation-themed fraternity formal in college surfaced on Reddit.

"While there have been rumors circulating, there have also been truths that have come to light that I need to address," she wrote, adding that she was "wrong" and apologizing. "At one point, I didn't recognize how offensive and racist my actions were, but that doesn't excuse them."

"My age or when it happened does not excuse anything. They are not ok or acceptable in any sense," Rachael continued. "I was ignorant, but my ignorance was racist." In addition to apologizing to the "communities and individuals that my actions have harmed and offended," she promised that she is "learning and will continue to learn" how to combat racism. "I am ashamed about my lack of education, but it is no one's responsibility to educate me," Rachael wrote, encouraging others to "learn from my mistakes."

Shortly after Rachael released a statement, 25 of her fellow contestants shared an open letter expressing that they were "disappointed" in Rachael's actions and in people like Chris Harrison, who had initially defended her before releasing an apology of his own. "We are the women of Bachelor Season 25. Twenty-five women who identify as BIPOC were cast on this historic season that was meant to represent change," reads the statement, which was shared by several cast members, including Marylynn Sienna, Magi Tareke and Bri Springs. We are deeply disappointed and want to make it clear that we denounce any defense of racism."

"Any defense of racist behavior denies the lived and continued experiences of BIPOC individuals. These experiences are not to be exploited or tokenized," the statement continued. The group also shared their support for former Bachelorette Rachel Lindsay, who questioned Harrison about Rachael's racist past during an interview for Extra. "Rachel Lindsay continues to advocate with 'grace' for individuals who identify as BIPOC within this franchise. Just because she is speaking the loudest, doesn't mean she is alone. We stand with her, we hear her, and we advocate for change alongside her," they concluded. The former Bachelorette thanked all of the women for their statement and support on her Instagram Story, writing "This is everything ... This truly moved me."

While Matt James has not yet commented on Rachael's apology, on Feb. 2, he addressed the TikTok rumors in an interview with Entertainment Tonight. "I would just warn people to be careful about making accusations before someone’s had a chance to speak on it," Matt said. "And rumors are dark, and they’re nasty, and they can ruin people’s lives, so ... I would give people the benefit of the doubt, and hopefully, she’ll have her time to speak on that. ... Everyone has a story, and I would just be receptive to that."