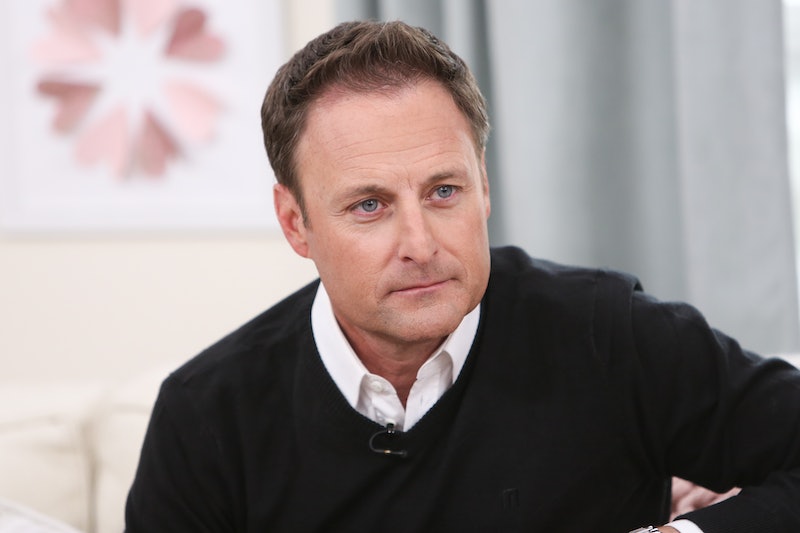 After being called out for his tonedeaf comments regarding a Bachelor contestant's controversial social media activity, Bachelor host Chris Harrison apologized for defending contestant Rachael Kirkconnell in a way that "perpetuates racism" in a statement shared on Instagram. Several claims have recently been circulating on TikTok that Rachael — who is one of the frontrunners on Matt James' season of The Bachelor — has liked racist social media posts and even "ridiculed" a classmate for dating Black men. (Neither ABC nor Rachael have commented on the rumors.)

On Feb. 5, photos of Rachael attending a plantation-themed fraternity formal in 2018 surfaced on Reddit, garnering criticism from fans and members of Bachelor Nation. During an interview with former Bachelorette Rachel Lindsay on Feb. 10, Harrison encouraged people to show the contestant "a little grace, a little understanding, a little compassion." He also defended her when the Bachelor Happy Hour host pointed out that it "wasn't a good look" to attend a party "celebrating the Old South."

"Well, Rachel, is it a good look in 2018, or is it not a good look in 2021? Because there's a big difference," Chris said, arguing that people were less aware of the formal's racist connotations a few years ago. "That was not the case in 2018. And again, I'm not defending Rachael. I just know that, I don't know, 50 million people did that in 2018. That was a type of party that a lot of people went to. And again, I'm not defending it; I didn't go to it."

He also defended Rachael's silence amid the social media controversy, stating that it becomes a "slippery slope" once contestants feel like they have to address something publicly. "The woke police is out there. And this poor girl Rachael, who has just been thrown to the lions, I don't know how you are equipped when you have never done this before, to be woke enough, to be eloquent enough, to be ready to handle this," he said.

Chris' comments were met with a great deal of criticism and backlash from both fans and former contestants; an online petition asking ABC to fire him as host and producer has over 19,000 signatures at the time of publication. In response, the host shared a statement on Instagram on Feb. 11 apologizing to Bachelor Nation — and Rachel Lindsay in particular — for his comments. "To my Bachelor Nation family—I will always own a mistake when I make one, so I am here to extend a sincere apology," he wrote, adding that due to his platform, he should have been better "informed" before speaking on certain topics.

"While I do not speak for Rachael Kirkconnell, my intentions were simply to ask for grace in offering her an opportunity to speak on her own behalf," he said. "What I now realize I have done is cause harm by wrongly speaking in a manner that perpetuates racism, and for that I am so deeply sorry." Chris also apologized to "my friend Rachel Lindsay for not listening to her better on a topic she has a first-hand understanding of" before thanking everyone in Bachelor Nation for "hold[ing] me accountable" for his comments. "I promise to do better," he concluded.

While Rachael herself has not yet publicly commented on the controversy, Bachelor Matt James addressed the rumors during a Feb. 2 interview with Entertainment Tonight, encouraging people to be "receptive" to her story. "I would just warn people to be careful about making accusations before someone’s had a chance to speak on it ... we saw how that happened with Brittany and Anna," Matt said. "And rumors are dark, and they’re nasty, and they can ruin people’s lives, so ... I would give people the benefit of the doubt, and hopefully, she’ll have her time to speak on that."