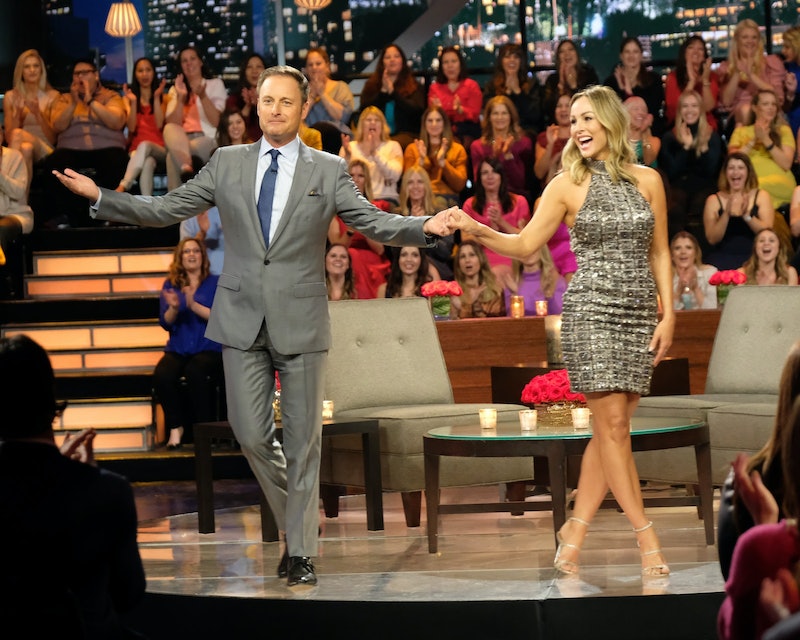 The upcoming season of The Bachelorette is truly setting itself up to be the most dramatic one ever, and fans already have some ideas about how things are going to shake out. In the wake of reports that Clare Crawley decided to leave the show after just two weeks of filming, these Bachelorette fan theories might predict the upcoming season — especially after multiple members of Bachelor Nation have reportedly been spotted at the Palm Springs resort where production is underway.

Here's what fans know for sure: In March, ABC announced that Clare would be the newest Bachelorette, though production on her season was postponed due to the ongoing coronavirus pandemic. Filming began in July, and the men competing for Clare's heart were unveiled around the same time. Among them is Dale Moss, a 31-year-old former NFL player who reportedly earned the First Impression Rose while filming, and on August 3, multiple outlets reported that Clare had decided to leave the show after falling in love with Dale while filming. According to Deadline, she will be replaced by Tayshia Adams, and when the season premieres this fall, it will follow both Clare and Tayshia's journeys to find love.

While that twist alone would be enough to solidify the upcoming season of The Bachelorette as an installment unlike any other, in the days since Tayshia was announced as the new Bachelorette, several other members of Bachelor Nation — including Hannah Ann Sluss, Becca Kufrin and Wells Adams — have reportedly been spotted on the show's set. So what's really going on? These are fans' biggest theories:

The Other Contestants Are There As Advisors For Tayshia

Many of the recent seasons of both The Bachelor and The Bachelorette have brought past contestants and leads back for cameos in the first few episodes of a new season, and to give the new Bachelorette some advice about what they should expect and who they should watch out for. According to E! News, that's exactly the role that Hannah Ann and Becca will be fulfilling on Tayshia's season: "[They] are there as friends," a source told the outlet. "It's now transitioning into a regular Bachelorette season and they are there to lend support." Ashley Iaconetti is there as well, as is Tayshia's former Bachelor and Bachelor in Paradise cast mate Sydney Locato, which makes this theory seem much more likely.

There Will Be A "Panel" Of Bachelorettes

Remember on Kaitlyn Bristowe's season of The Bachelorette when the men voted between her and Britt Nelseon to be the Bachelorette on the first night? One popular theory is that ABC is recreating that situation once more, but with even more options for the men to choose from. "Producers got on the phone with [Hannah Ann and Becca] and decided to, for the first time in Bachelor history, create a PANEL of bachelorettes for the guys to choose from," Twitter user @BachelorSuitcaseGuy wrote on Aug. 5, citing that Hannah Ann's suitcase was "abnormally heavy" for her to just be filming a cameo. "Producers are still working out the details, but expect a hybrid rose ceremony set-up where three girls will decide the men to keep. Lots of options opened up with group dates and even potential competition between the women," they continued.

Multiple Seasons Of The Bachelorette Are Filming

With no current end in sight to the ongoing coronavirus pandemic, it doesn't seem unusual that ABC might want to bank multiple seasons of The Bachelorette so that there's plenty of new episodes to keep fans entertained. As a result of that — and a Reality Steve tweet from July 31 confirming that producers reached out to "backup" men about returning to the show — some fans think that multiple seasons of The Bachelorette are possibly being filmed either at the same time, or one after another. Like with the "panel" theory, the new leads are assumed to be Hannah Ann and Becca, who reportedly just broke up with Garrett Yrigoyen after two years together.

Bachelor In Paradise Is Currently Filming

On August 6, Us Weekly reported that Wells Adams was also spotted at the Palm Springs resort where The Bachelorette is being filmed. The radio DJ — who has served as the in-house bartender on Bachelor in Paradise since 2017 — was photographed standing behind his bar cart, chatting with host Chris Harrison. Adams reposted the image on his Instagram Story, joking that he and Harrison were chatting about "golf," but his presence adds credence to the idea that producers are filming both The Bachelorette and Bachelor in Paradise at the same time. However, Reality Steve wrote that "BIP is not happening at filming," on Twitter that same day, so it's possible that producers have simply brought in some familiar faces to begin quarantining so that BIP can begin filming as soon as Tayshia's Bachelorette season wraps.

As for which one — if any — of these theories is correct, fans will have to wait until the new season of The Bachelorette premieres this fall. Just make sure to stock up on rosé before then.