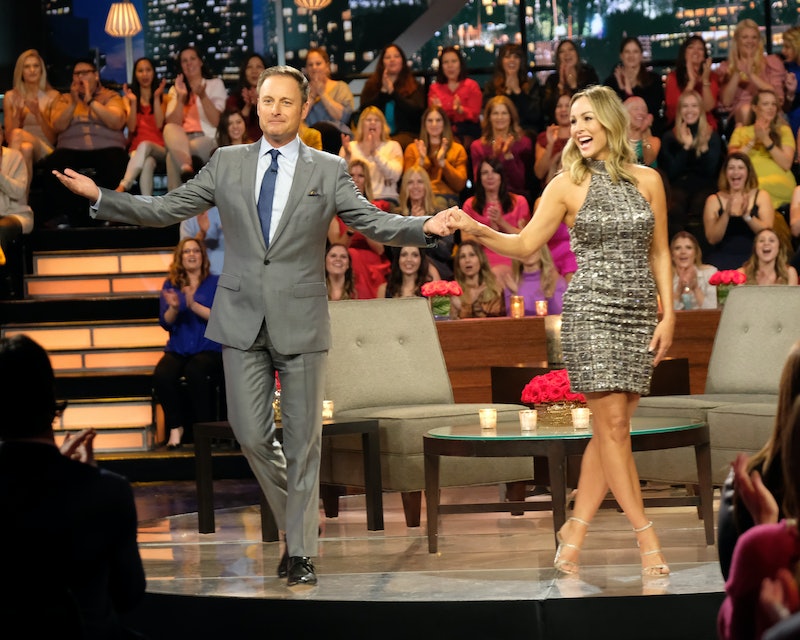 Less than a month after Clare Crawley was announced as the new Bachelorette, her journey to find love is being put on hold. Shortly after ABC announced they were halting production on the upcoming season, Clare Crawley responded to The Bachelorette being shutdown due to novel coronavirus (COVID-19) concerns on Instagram, and her statement shows she's taking the delay in stride.

The hairdresser — who will be making her fifth appearance on the Bachelor franchise when her season premieres — kicked things off by joking about the show's penchant for drama. "Well hello! Talk about most dramatic season ever!" Clare wrote, alongside a photo of herself and Chris Harrison from Peter's After the Final Rose special on March 10. "In all seriousness, everyone’s health is the most important priority at this time, and as I’m sure you’ve heard, we are pressing pause for now on filming The Bachelorette."

Clare then explained that the production team is taking everything "day by day and even hour by hour," in order to make sure that she, the production team, and the men competing for her heart stay safe in this "unpredictable" time. Despite all of the confusion and uncertainty, Clare made sure to thank Bachelor Nation for all of the "the love and support" they have offered her since she was announced as the Bachelorette.

"All I know for sure is that my heart is so full from all the love and support this far, and am still so excited for my journey to begin!" Clare wrote, concluding her post on a particularly upbeat note: "I’ve waited 38 years for these moments, what’s a little bit longer, right?"

According to Deadline, Clare's season of The Bachelorette was originally scheduled to premiere on May 18, and at the end of February, Reality Steve wrote on Twitter that production was slated to begin on Friday, March 13. However, the day that the new season was set to start filming at the Bachelor Mansion, Entertainment Weekly reported that production for Season 16 has been stopped, and delayed due to COVID-19.

In response to the announcement, ABC's Senior Vice President of Alternative Series, Specials & Late-Night Programming Robert Mills wrote on Twitter that the decision was made because "we need to be safe and sane, #Bachelornation." However, he also added that the Bachelorette team is monitoring the situation and "will keep working 24/7 to get back on track as soon as we can!!"

Before the decision was made to halt production entirely, The Bachelorette host Chris Harrison revealed that producers were taking extreme precautions to keep everyone safe. "We're not going to be doing the elaborate all-around-the-world tour, because you just can't right now," Harrison told Entertainment Tonight on March 11. "We're going to stay obviously around the United States, and closer to home when we go on set... there's a ton of precautions being taken."

Despite all of the precautions, halting production seems to be the best way to ensure that everyone involved with Season 16 of The Bachelorette stays safe and healthy. If Clare can deal with the delay, she should be able to handle any drama that comes her way when filming picks back up.