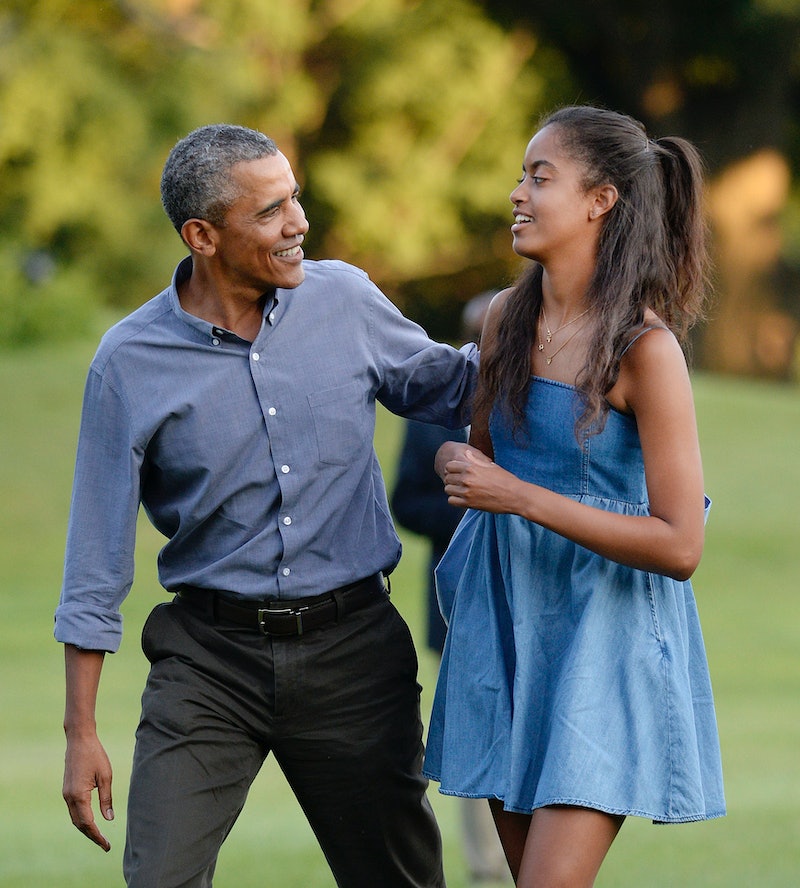 Staying with your significant other's family is always a little stressful, so imagine how it must have felt for Malia Obama's boyfriend to meet the former first family of the United States. During an appearance on The Bill Simmons Podcast, Barack Obama revealed that Malia's boyfriend quarantined with their family when the country went into lockdown at the beginning of the pandemic. The former president was talking about how they passed the time during lockdown when he revealed they had an extra guest with them at the time.

"I think, [like] a lot of families, we went through that first month where we were playing games every night and doing little arts and crafts projects and then slowly, you know, they started to get a little bored with us," Obama said when asked about what he enjoyed most about that time with his family. "Maybe teaching Malia and Sasha, and Malia's boyfriend who was with us for a little while, spades." As Obama explained, Malia's boyfriend is British, and had no choice but to stay in the United States when the country began shutting down in March.

"He was sort of stuck because there was a whole visa thing and he had a job set up," Obama said, describing Malia's boyfriend as a "wonderful" young man. "So we took him in and I didn't want to like him, but he's a good kid." Despite how much the family liked Malia's new beau, Obama admitted that there was one complicating factor that came with inviting him to stay. "The only thing you discover — this is not a surprise to you, Bill, because you've got a son — young men eat," he said. "It's weird to watch them consume food. My grocery bill went up about 30%."

Despite the pandemic, Obama told People in November that Malia — a senior at Harvard University — and Sasha, who is a sophomore at the University of Michigan, have been at home with their family "almost continuously since March." And while he admitted to the outlet that there were times where everyone felt a little "claustrophobic," he said that he and Michelle were grateful for the "bonus time where your kids are having dinner with you every night and we're playing games and watching movies together."

The experience also brought Malia and Sasha, who are at school in different parts of the country, even closer. "I think part of what's been also wonderful is seeing Malia and Sasha become such great friends. They've got a three-year gap between them, and when one is 16 and the other one's 13, there's still that sister competition," Obama explained. "Now they're both old enough, where they just enjoy each other's company, and to be together as a family and see how they've become these marvelous young women — there's been no greater joy than that."

The former president has never been shy about praising his daughters, both in terms of their activism and their personal goals. In November, he told People that he was proud that Malia and Sasha took part in the Black Lives Matter protests and rallies. "They had a very clear sense of what was right and what was wrong" following the deaths of George Floyd and Breonna Taylor, Obama explained. "Malia and Sasha found their own ways to get involved with the demonstrations and activism that you saw with young people this summer, without any prompting from Michelle and myself, on their own initiative."

Around the same time, Obama celebrated his "badass" daughters in an interview with InStyle. "Sasha is ... completely confident about her own take on the world and is not cowed or intimidated — and never has been — by anybody's titles, anybody's credentials. If she thinks something's wrong or right, she will say so," he told the outlet. "And Malia, she is just buoyant. She's somebody who enjoys people, enjoys life, and enjoys conversation. She's never bored, which is a badass quality that can take you places."