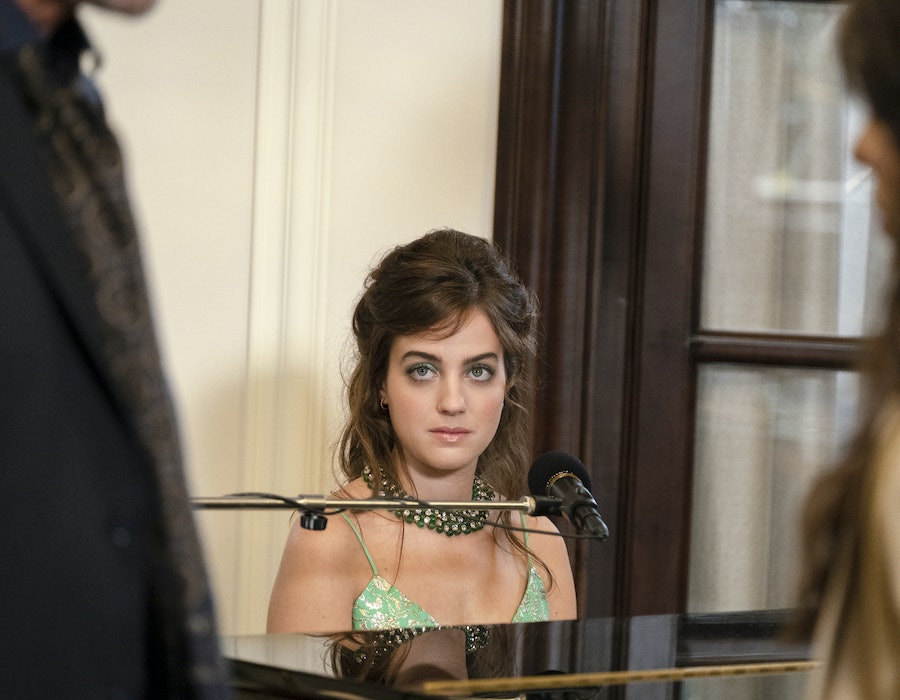 Fans are declaring The White Lotus’ Italian duo Lucia and Mia the winners of Season 2 after the finale — and star Beatrice Grannò agrees. “It's not a competition, but they kind of won the game,” says Grannò, who plays Mia.

After Tanya (Jennifer Coolidge) met her untimely demise and the rest of the characters head back home, it’s the two friends who get to take a victory stroll after Lucia (Simona Tabasco) successfully conned 50,000 euros from Albie (Adam DiMarco) and Mia secured her singing job by seducing the resort’s lonely manager Valentina (Sabrina Impacciatore). “They managed to get away with what they wanted, and they're really happy,” Grannò tells Bustle. “In some ways, they broke everything apart, and they fixed all the problems that were there.”

The actor, 29, explains that the pair may have started by stirring up trouble for the hotel guests, but ultimately, those conflicts forced many of the characters to confront their unresolved feelings. “They fixed the relationship between Ethan and Harper. Mia awoke the sexuality of Valentina's character,” Grannò says. “They got to the hotel, they broke the equilibrium, but then, they built it back. So I feel like they’re two little fairies, like two little witches that were put there just to fix problems.”

Mia’s voice also cast a spell on the White Lotus guests and employees, but bringing her singing performances to life was initially challenging for Grannò. Along with the show’s creator Mike White, music consultant Este Haim encouraged Grannò to go big with her voice. “I prepared all the music in more of a jazz lounge-y sound with a much softer voice,” she says of Mia’s first performance. White had wanted it to be more “Broadway” sounding. “Este Haim was great for that because she was pushing me to really belt out my voice. She kept telling me, ‘You have the voice. Take it out. You need to fill up the whole room because people need to notice you.’”

Below, Grannò shares her thoughts on the Season 2 finale, Mia’s Marilyn Monroe moment, and all those fan theories.

What was your reaction to the finale and that big twist?

I found the finale very beautiful because Jennifer Coolidge’s death is so funny. I found myself laughing and crying at the same time. I love the fact that she managed to fight back. But then I thought it was incredible that she can save herself, and she dies by stumbling from a boat. I thought that was very poetic in a way.

Were you ever worried for Mia, especially with Giuseppe coming back?

That's another moment where you think that he's going to be the killer. It was funny the way Mia played it. She has no clue and is like, Yeah, I did that. I'm sorry. It's a meritocracy. I'm here. I'm better than you. And when he tells her, “You almost killed me. And now you took my place.” She just goes, “Yeah,” and it's fun to see that.

If we look at Mia in the first episode versus how she is at the end, it’s a big transformation for the character. What was that journey like?

I loved it because Mia, in the beginning, is very blocked; she's not aware of her body and her talent. But as she goes on, she gets affected by the White Lotus curse. She turns into this woman who wants to get everything she wants, and she will do everything in her power to make that happen. And she gets influenced a lot by Lucia’s energy — she's so free while Mia is not at all. But then something magical happened, and we kind of switched for a second. Lucia starts being the more romantic one, and she takes some energy from Mia in order to get what she wants. And I take Lucia’s energy to do what I want.

I loved seeing how Mia grows and becomes crazier with the help of her outfits as well. She switched her style completely and her way of seeing things.

What was your favorite costume from the season?

It was the white one with the feathers I have in Episode 6. I thought it really suited me. Also, when I watched the episode again, I watched myself singing “Happy Birthday.” I was like, that seems like a Marilyn Monroe reference. But I don’t think we planned that. I tried so many costumes for that scene, and then we ended up choosing that one because I really liked it. So many fans were saying this [reminded them of] Marilyn Monroe singing “Happy Birthday” — this femme fatale seducing Valentina.

You mentioned how Lucia and Mia draw their different energies from each other. Would you say something similar happened between Mia and Valentina?

It's like a butterfly effect. Lucia unblocks me, then I unblock Valentina, and then we influence each other. It's a circle. It’s this energy that is Italy as well. When you go to Italy, especially Sicily, it's a place full of smells and tastes, and you're thrown into this place where you feel everything.

Have you been following all the fan theories?

I have. It was crazy how everyone thought that Mia and Lucia were going to be the victims and die. I also read that Lucia’s character was going to kill me. I'm like, What? Why? I've read so many things. I definitely saw someone wrote something about Jennifer Coolidge and kind of got there but not quite. But it was fun to see how everybody rooted for Mia and Lucia to stay alive. Simona and I have been messaging that everybody thinks we're going to die. But it was good that we survived.

Could you see Mia returning on The White Lotus for a future season at another resort?

I really hope so. Maybe she's touring the White Lotus? Or maybe she will appear as this very famous singer? I'd love that. But also, I like to leave space for the next project and see what happens.

More like this
At 28, Debra Jo Rupp Was Living A Much Different '70s Show
By Grace Wehniainen
At 28, Rosie Perez Risked Her Career To Stop Playing Stereotypes
By Gabrielle Bondi
Keyla Monterroso Mejia Is Finally The Star Of The Show
By Gabrielle Bondi
Linda Ronstadt’s “Long Long Time” Plays A Pivotal Role In The Last Of Us
By Brad Witter
Get Even More From Bustle — Sign Up For The Newsletter
From hair trends to relationship advice, our daily newsletter has everything you need to sound like a person who’s on TikTok, even if you aren’t.