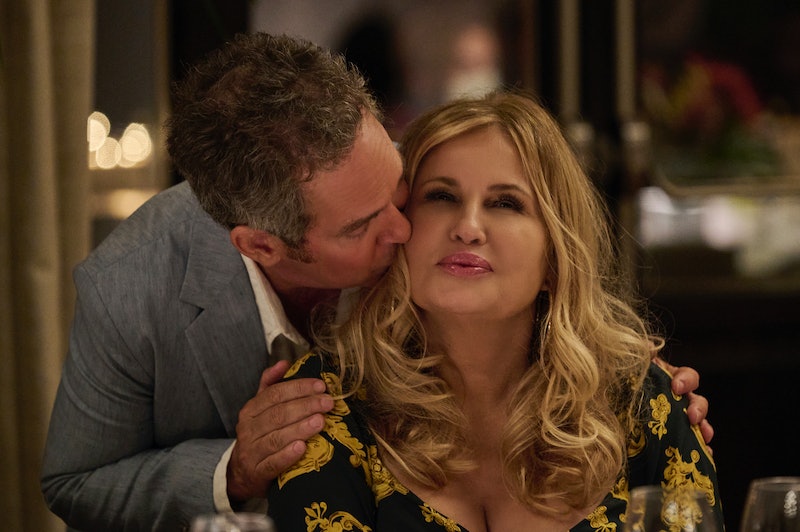 During the Dec. 11 finale, Tanya and Portia figured out Quentin’s scheme: to kill Tanya, so that he and Greg could get at her fortune. Once Tanya discovered rope, duct tape, and a gun in a duffel bag, she realized it was now or never, deciding to shoot (and kill) almost everyone on board the yacht.

Then, once it was time to make her exit, she made a leap in the dark onto a dinghy below — only, she didn’t quite stick the landing and instead bumped her head on the vessel, falling unconscious into the Ionian Sea.

As if Tanya’s floating body wasn’t proof enough of her fate, The White Lotus creator Mike White confirmed Tanya’s death in a featurette after the episode. As White pointed out, Tanya’s death was actually foreshadowed all the way back in Season 1. While sitting at the Hawaii resort’s bar with Greg, Tanya said something pretty alarming (but also very Tanya): “I’ve had every kind of treatment over the years. Death is the last immersive experience I haven’t tried.”

White said he thought “it’d be so fun” for The White Lotus Season 2 to focus on Tanya’s journey toward death. “Not that I really wanted to kill Tanya, because I love her as a character, and obviously love Jennifer [Coolidge], but I just felt like ... we could devise our own operatic conclusion to Tanya’s life and her story.”

However, it was important to White that Tanya wasn’t killed by someone else. It’d be “too tragic,” he explained. “It felt like she needed to give her best fight back, and that she, in a way, had some kind of victory over whoever was conspiring to get rid of her ... and that after she successfully does that, then she just dies this derpy death. And it just felt like, that’s so Tanya.”

If you’re still a bit shocked, you’re not alone. Though we knew from the first episode that there would be several deaths during The White Lotus Season 2, it actually seemed fairly unlikely that Tanya would be one of them. White had recently told Deadline that he’d be interested in bringing Coolidge’s Tanya to future installments of the show. “I was like, I can’t go to Italy without Jennifer,” he said. “And maybe that’s still the case, like, maybe I can’t go to Japan without Jennifer either.”

But it still seems possible that Tanya’s death will play a role in The White Lotus Season 3. “It’s possible that I think Portia is just scared enough to leave it alone,” White said, “But the fact that all of those guys die on the boat feels like there’s got to be somebody who’s gonna track it back down to Greg. But maybe you’ll have to wait to find out what happens.”

More like this
'Succession' Season 4 Will Be An "Absolute Banger" According To Cousin Greg
By Bustle Staff
Helena Bonham Carter Doesn't Think 'The Crown' “Should Carry On"
By Sam Ramsden
Everything To Know About The 'Daisy Jones & The Six' TV Series
By Maxine Harrison and Brad Witter
'Magpie Murders' S2 Will Include A *Major* Shake-Up
By Sophie McEvoy
Get Even More From Bustle — Sign Up For The Newsletter
From hair trends to relationship advice, our daily newsletter has everything you need to sound like a person who’s on TikTok, even if you aren’t.