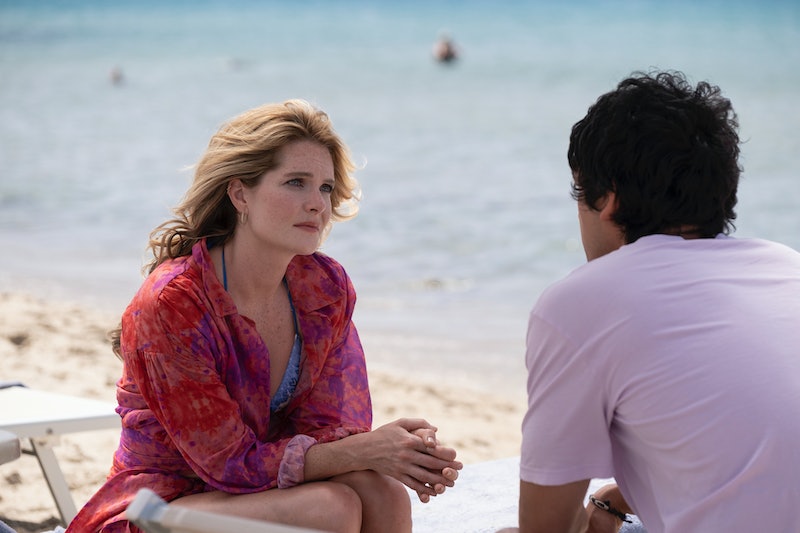 Spoilers ahead for The White Lotus Season 2 finale. After the explosive finale of White Lotus Season 2, fans are dying to know if Ethan (Will Sharpe) slept with Daphne (Meghann Fahy). As fans will recall, Ethan spent his vacation worried about whether his wife, Harper (Aubrey Plaza), had cheated on him with his fellow Yale alum Cameron (Theo James). Harper admits that Ethan’s suspicions were true — Cameron did try to make a move on her, but things didn’t escalate beyond a kiss. After Ethan confronts Cameron in a much-anticipated fight, he tells Daphne he thinks their respective spouses slept together.

Daphne, our forever unbothered queen, appears to mull over this idea. She brushes off Ethan’s assumptions and says, “I mean, we never really know what goes on in people’s minds and what they do, right?” She adds, “There’s still this part that’s a mystery. You don’t have to know everything to love someone.” She then explains that he should do whatever makes him not feel “like a victim of life,” which echoes what she told Harper on their excursion to Noto. The two then walk to Isola Bella off the coast, and their adventure continues off-camera, which begs the question of whether Ethan and Daphne have an affair of their own. Viewers were left to use their imagination since the next time we see any of the couples is at dinner later that evening.

Daphne’s and Cameron’s unfaithfulness is unsurprising since they both let on that they cheat on each other throughout the season. We see Cameron have sex with Lucia, and it’s implied that Cameron may not be the father of Daphne’s children.

Whether Ethan slept with Daphne to get back at Cameron and Harper or Daphne used Ethan’s moment of vulnerability to get revenge, both seem entirely possible. If they did indeed have an affair, it might have saved Ethan and Harper’s marriage since they finally have sex and cuddle at the airport by the end of the episode. If they didn’t, then maybe Ethan chose to be the bigger person and repair his marriage on his own terms.

Fahy weighed in on the off-screen moment, telling Variety that something definitely happened. “Honestly, in that moment, I think Daphne just saw this broken man and wanted to do something to make him feel more empowered in her own strange way. I really don’t think that she led him there to get back at Cameron or Harper. Someone said something really interesting the other day, which was like, do you think that part of Daphne’s sadness comes from her betrayal from Harper? I was like, totally. I think she’s been through this with Cameron who knows how many times, but I think she really thought that Harper was maybe her friend, or wanted her to be.”

Daphne opened up to Harper in the third episode about her inability to keep female friends, which makes Ethan’s assumption especially painful after the moment of vulnerability. “So, I do think that was part of the experience of it but yeah, I don’t know that I can say exactly what happened, but I think definitely something sexual for sure,” she said.

Sharpe also told Variety what he understood the scene meant for Ethan and Daphne, noting that it’s open for interpretation. “But I feel like whatever happened, in a literal sense, that moment between them is definitely a moment of connection,” he said. “It’s a moment of intimacy. I think there’s something about Daphne’s sense of self, and the accommodation she has found with who she is, and how she’s living. Something about that, I think, affects Ethan.”

He added, “Often, Meghann and I were in scenes together, but that was one of very few actual interactions we had. I really felt like Meghann did such an amazing job in that scene. It was such a pleasure to be a part of that.”

Whether they slept together will remain a mystery, but one thing everyone agreed on was that Fahy deserves all of the awards for her performance as Daphne. Fans praised Fahy’s work in the finale (plus throughout the season). @SpencerAlthouse tweeted, “Meghann Fahy is SUCH a good actor. these 30 seconds of Daphne processing her husband’s affair (and then calculating how she’s gonna get back at him) are perfection.”

“meghann fahy deserves to be cast in everything after her performance as daphne in white lotus season 2, but in particular because of this absolutely brilliant, devastating, and subtle acting moment right here,” @noradominick chimed in.

This article was originally published on Dec. 12, 2022